For me photography has always been the best tool to discover a new place and its people. So the first thing I did when I moved to Buenos Aires in 2009 was to go out on extensive walks with my camera to discover the city.

Ever since then, I haven’t ceased to roam the streets of Argentina’s vibrant capital which has become my second home.

It never stops to amaze me with its buzzing energy and beauty – often hidden behind a gritty surface. But that’s what accounts for the immense charm. Countless economic and political crises have left their mark on this metropole. Traces of a splendid and somewhat faded past set the melancholic mood of Buenos Aires which finds its musical expression in Tango. On the other hand, the porteños as the inhabitants of Buenos Aires are called, have always faced adversity with resilience and great lust for life.

In this article I’d like to share some of my favorite spots that you shouldn’t miss when visiting Buenos Aires and give you some tips what to look out for on your photo walks. It’s more from a street photographer’s perspective as I approach travel photography from that angle. I’m not looking for post card shots, but focus more on details of everyday life, people and the little moments that so often slip by without coming to our attention.

Even though Buenos Aires is huge with its 3 million inhabitants in the center and around 14 million people living in the metropolitan area, it’s a city made for walking.

Wear some comfortable shoes and rely on your feet – you’ll get around much faster than using public transportation as traffic, especially during rush hour, is tremendous. However, there’s a tight net of busses and subways which are good options.
Being a passionate walker, I only take with me what’s absolutely necessary. I want to be able to move quickly with no heavy load to carry.

Limiting myself to one wide angle lens (18mm) means that I’ll miss some shots or that I can’t achieve a certain aesthetic. On the other hand it gives me more artistic freedom – even though that might sound paradox at first.

Getting rid of too many options makes me more deliberate and discerning. It helps to strengthen my photographic vision. But that’s just my personal view.

Now let’s go out and follow me on a photo walk on the streets of Buenos Aires!

The busy business center of Buenos Aires east of “Avenida 9 de Julio”, which was once considered to be the world’s widest street with its 18 lanes: This is the perfect environment for street photography. Just pause at any given traffic light or street corner and you’ll be in a street photographer’s paradise. When you go late in the afternoon the setting sun shoots right through the narrow side streets lined with high buildings all feeding into “Av. 9 de Julio”. A scenario that guarantees some dramatic light and shadow situations. 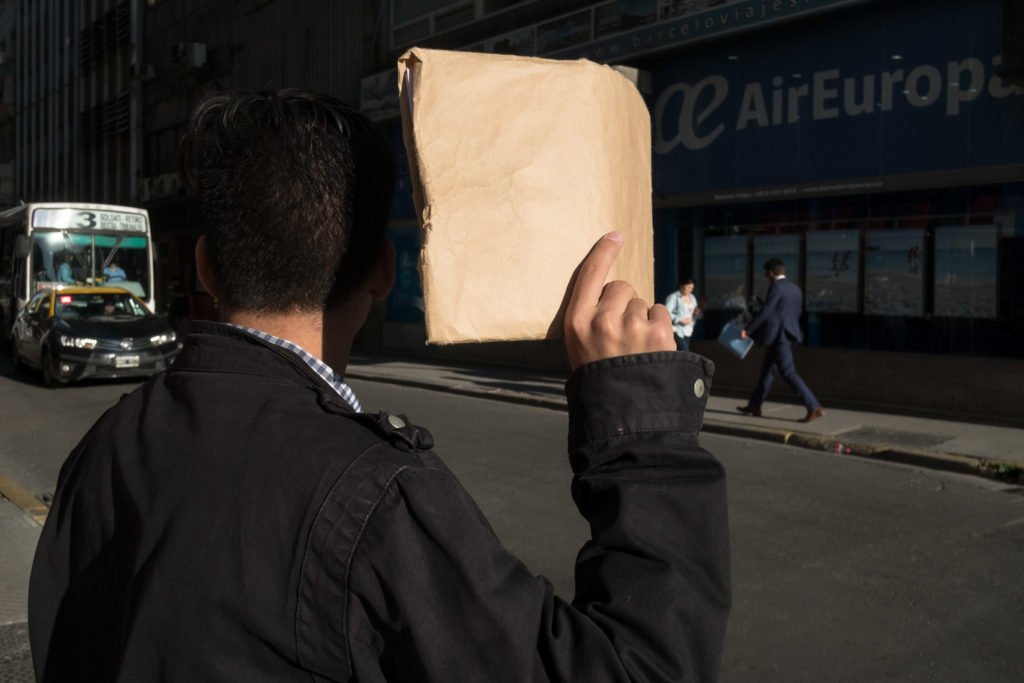 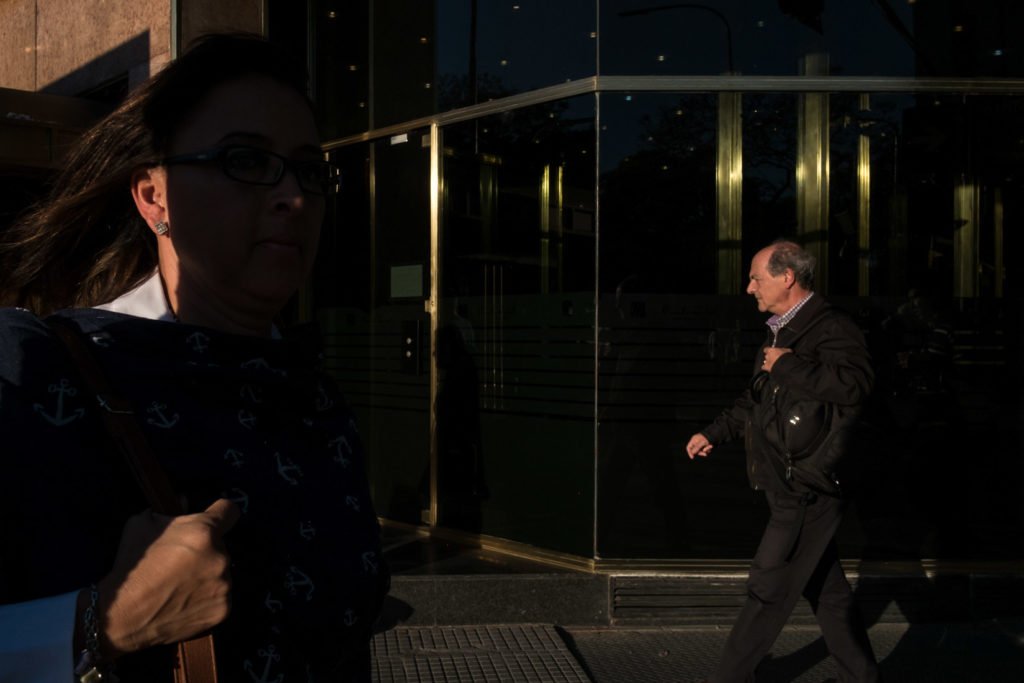 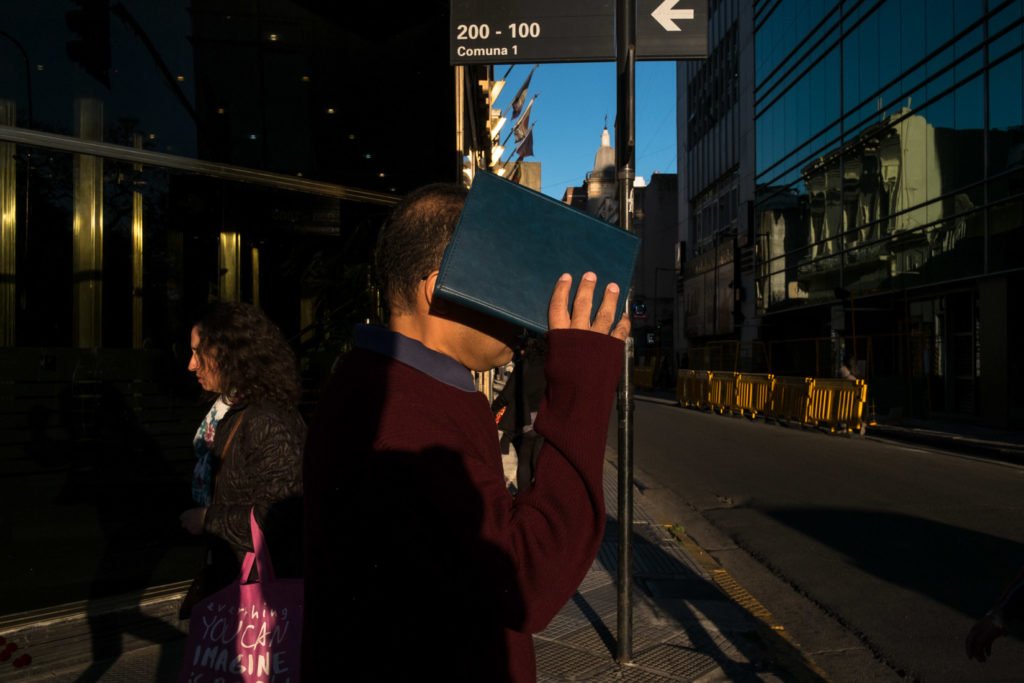 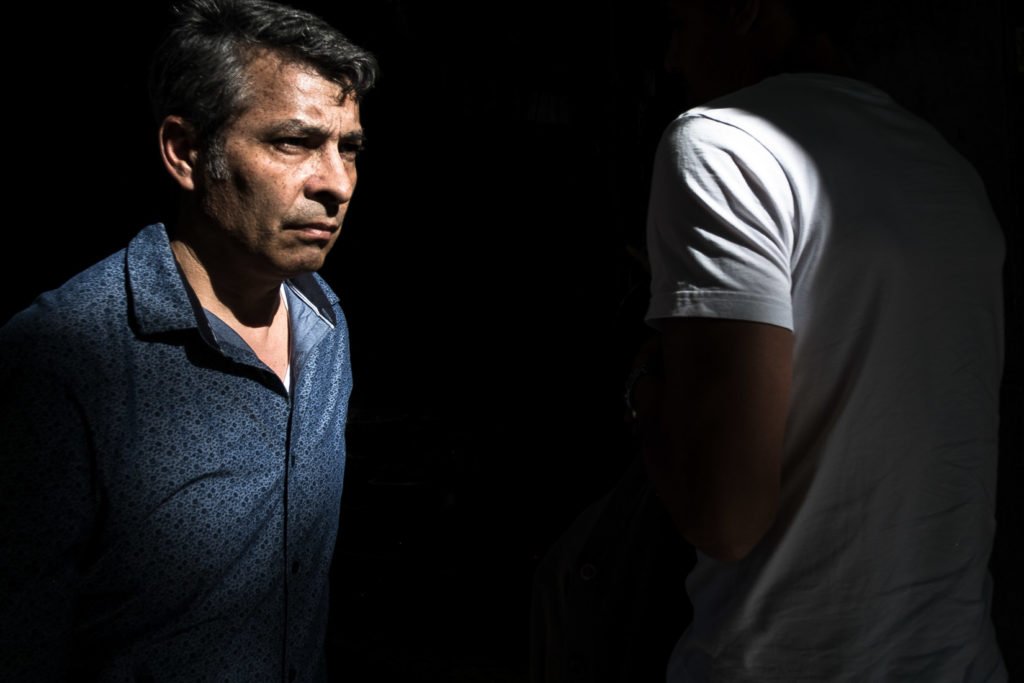 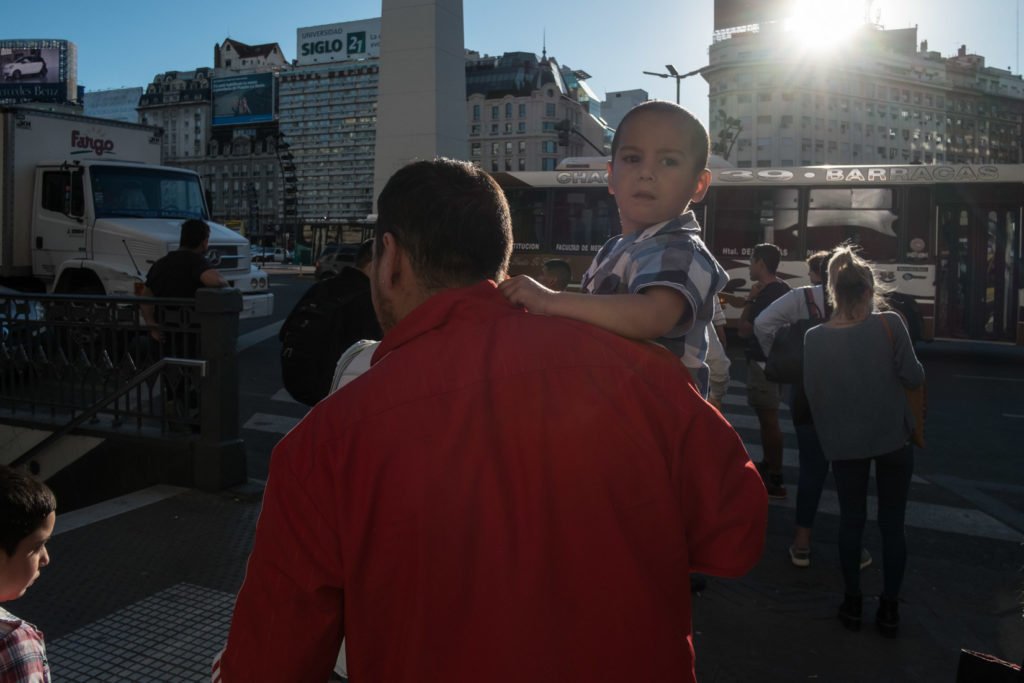 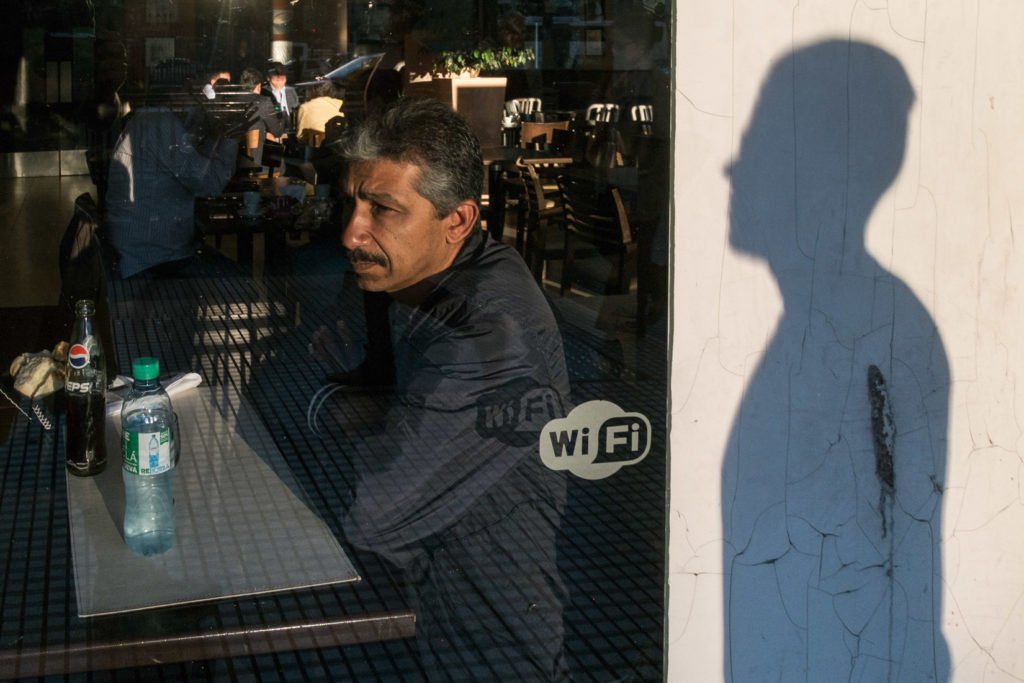 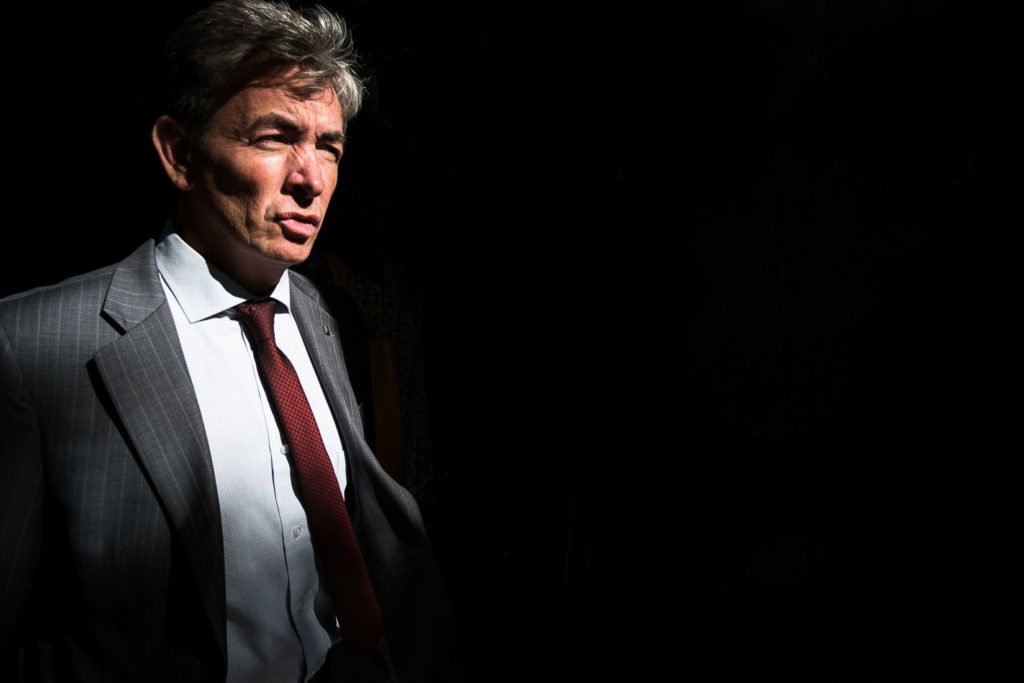 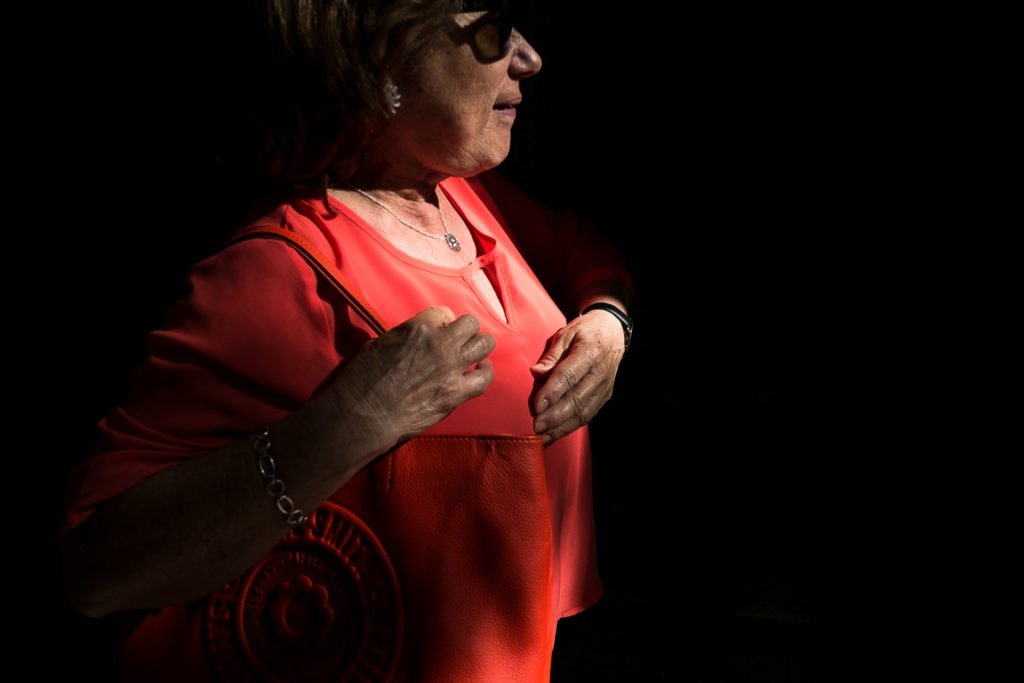 It’s not only the home of football club Boca Juniors where Diego Maradona rose to stardom in the early 1980s. This is also one of the historic neighborhoods, located on the banks of the Riachuelo. In the 19th and early 20th century immigrants from Europe poured in on big ships and settled around the old docks.

With little money at their disposal, the newcomers used wooden planks from the ships to construct precarious housing. To make them look nicer, they painted them with rests of half empty paint pots. The result: A colorful patchwork architecture which nowadays can be best seen in the famous “Caminito”.

In other areas of La Boca the paint has faded significantly more over the years and is not as well conserved, but nevertheless still possesses the stunning charm of a raunchy former port district.

There are beautiful facades and wall paintings all over La Boca which make for excellent backdrops for photos. Mixed with the warm evening light and mystic shadows it’s a magical place to take pictures. 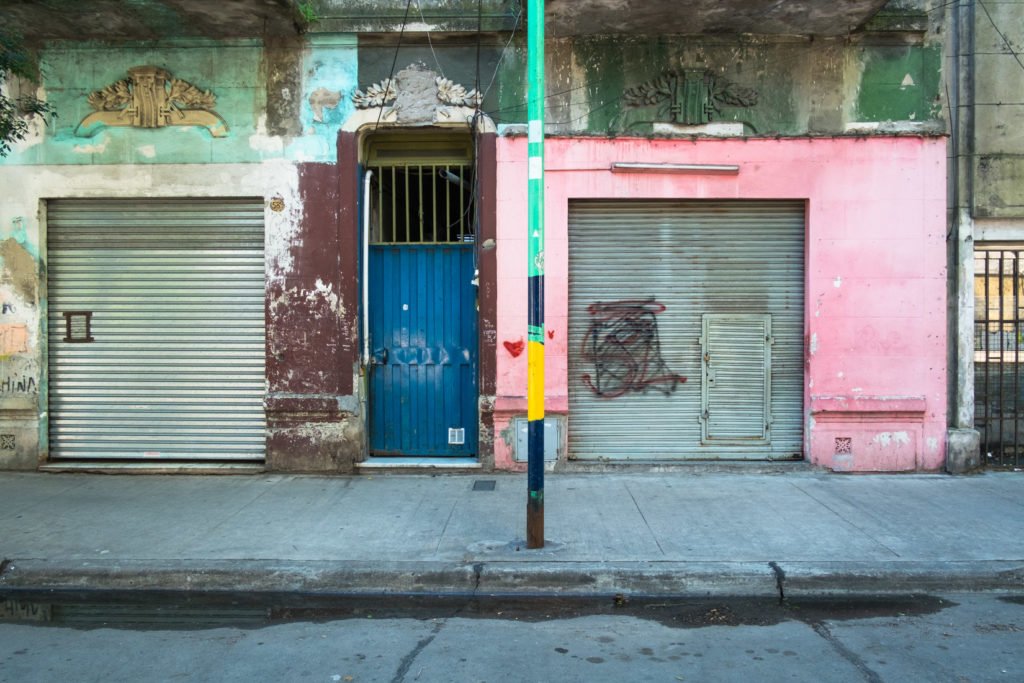 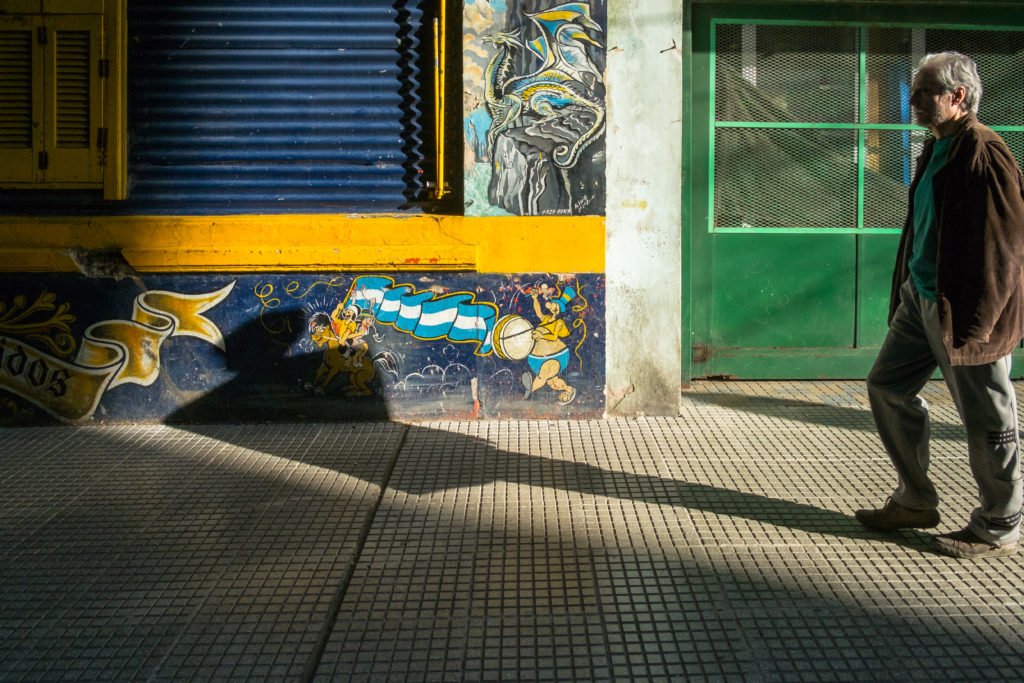 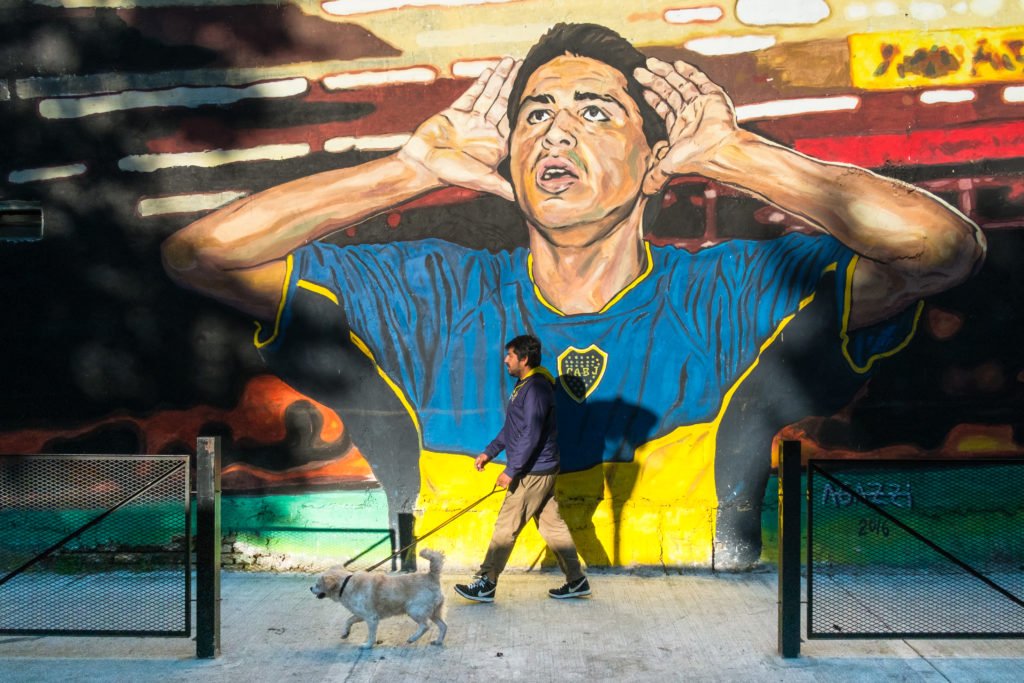 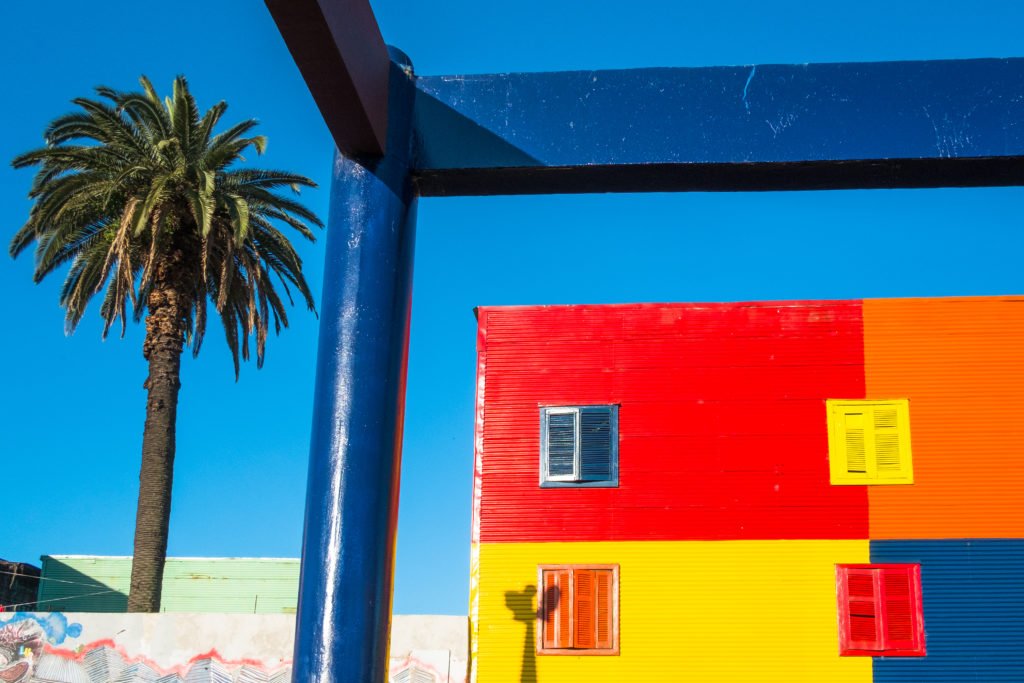 Just as La Boca, San Telmo is one of the historic neighborhoods that belong to the nucleus around which Buenos Aires spread out over the years since it’s foundation in 1536.

On Sundays it’s the stage of a huge street fair, that stretches from “Plaza de Mayo” all the way to “Plaza Dorrego”, in the heart of San Telmo. That’s also the stage for open air tango performances.

If you want to avoid huge crowds, you should go during the week. It’s a beautiful district to stroll around on cobble streets, enjoy colonial architecture and stop in one of the many cozy bars to have a coffee. 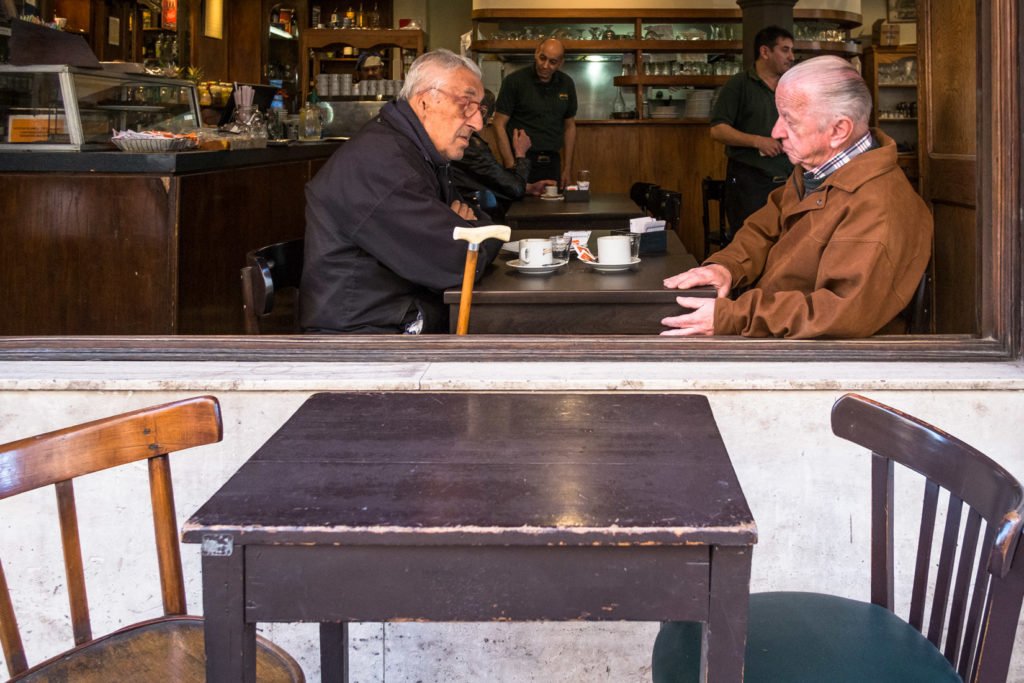 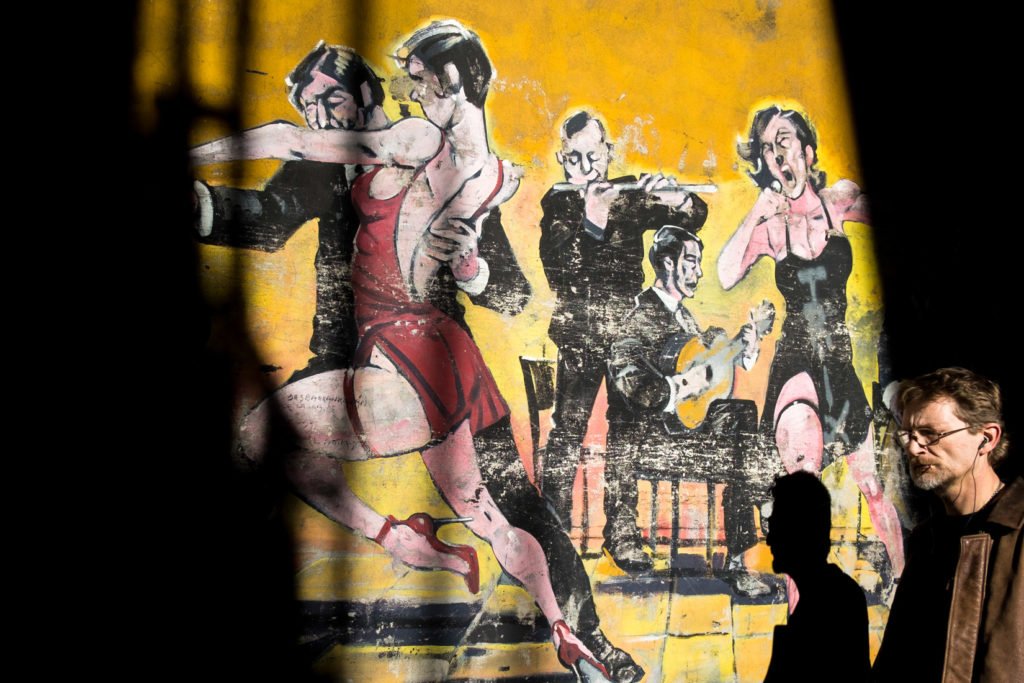 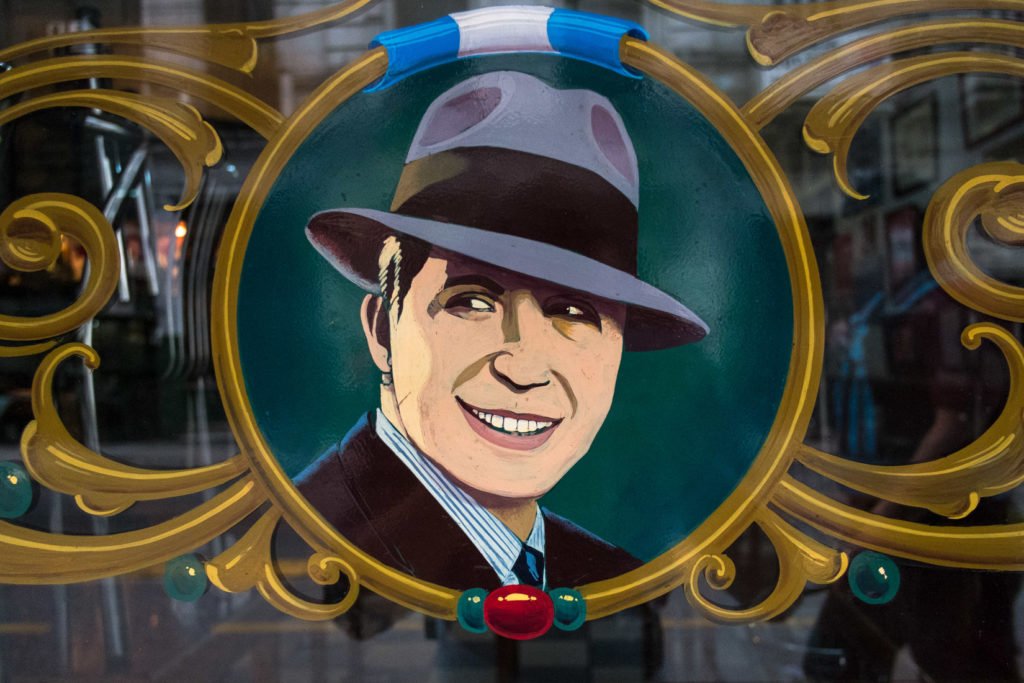 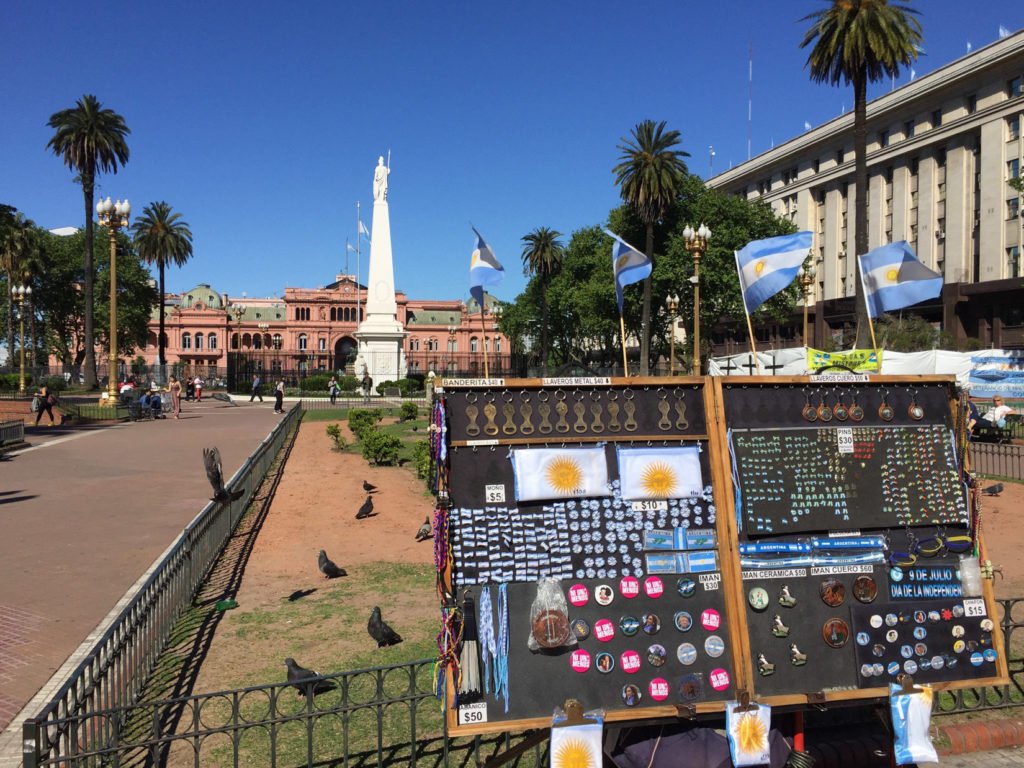 This neighborhood is characterized by its aristocratic splendor. It can be best observed in the opulent architecture. Walking by the majestic buildings it’s easy to understand why many people call Buenos Aires the “Paris of Latin America”.

One of the main attractions is the famous “Recoleta Cemetery” where you find the tomb of national icon Evita Perón. But other celebrities from all walks of life are buried there as well – business tycoons, artists or politicians. They found their peace in majestic crypts and mausoleums.

It seems like a city for the dead. At first sight the countless statues and ornaments can be quite overwhelming when you lift your camera to the eye. Left alone huge amounts of tourists rushing through the narrow corridors. But with some patience you’ll discover fascinating photo opportunities – combining light, reflections in the glass of the tombs and stunning architecture. 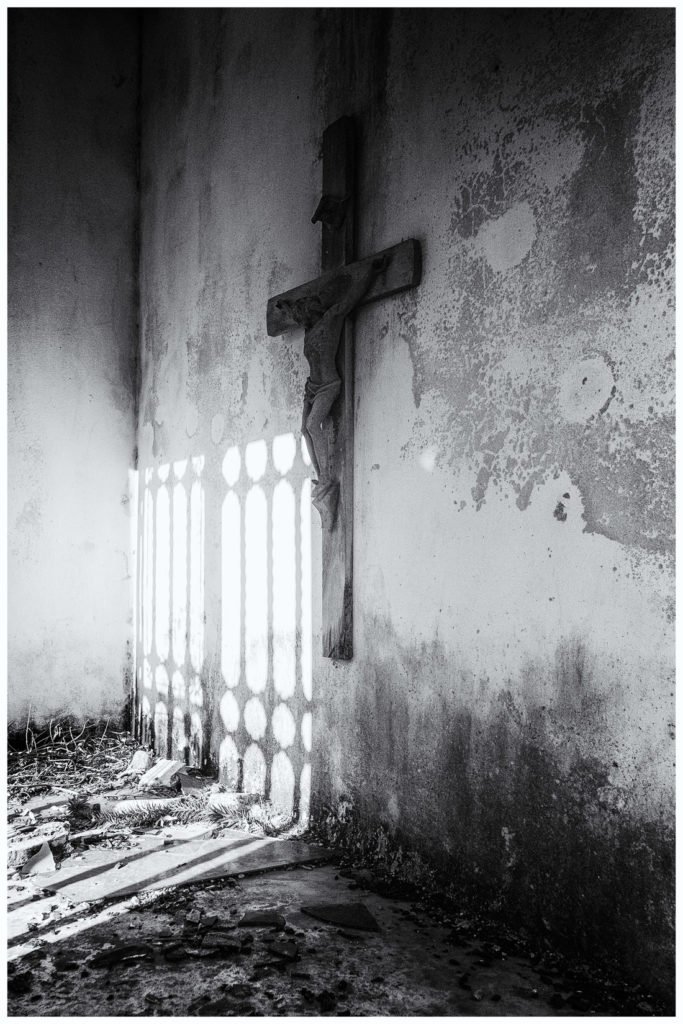 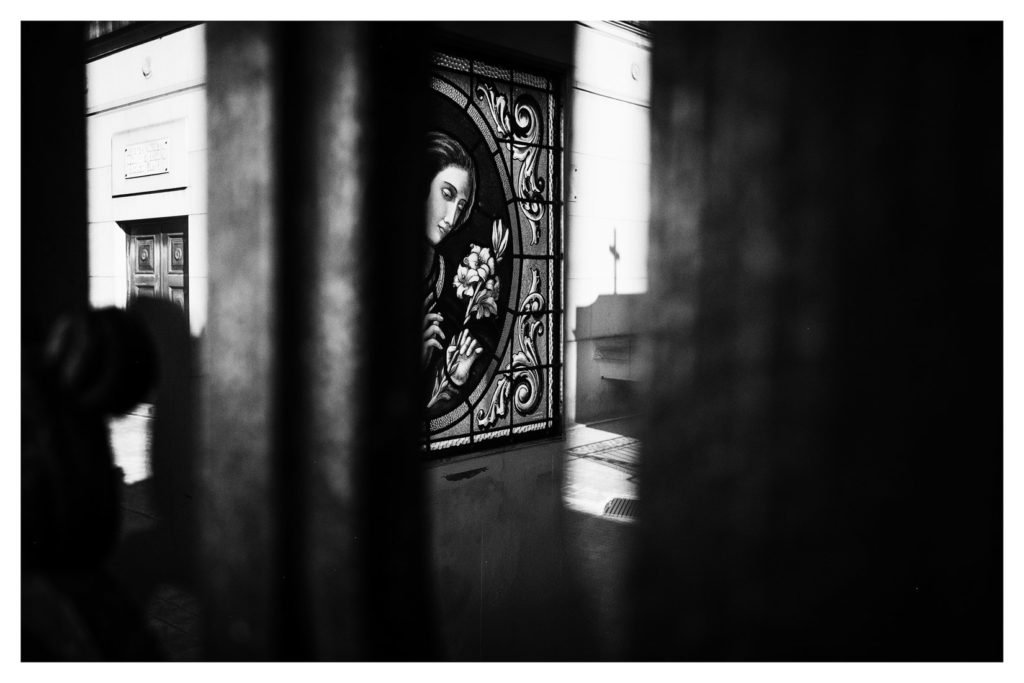 This is a good place to escape the hectic atmosphere of the center. There are parks all over the city, but the biggest green area is to be found in Palermo – it’s called “Bosques de Palermo”. Locals love to go there to relax and work out. The mix of people makes for good photo opportunities. The opulent rose garden (“Rosedal de Palermo”) surrounded by a lake is also worth visiting.

This is a huge market fair located in the meatpacking district of Liniers. It takes about an hour by bus to get there from the center.
Even though it’s become more and more popular with tourists, you can still get a glimpse into the real gaucho culture. Vendors sell traditional artisan work (knives, jewelry and cutlery), folkloric music is played on the open street and you can get a good taste of what a typical Argentine “asado” (barbecue) is all about.

There’s no shortage of restaurants and street vendors. It’s a very popular place with locals to go out and have lunch with the whole family. You will find plenty of motives to photograph – from reportage, to portraits of locals dressed in traditional clothes and sizzling cuts of meat covered in thick smoke on the grills. 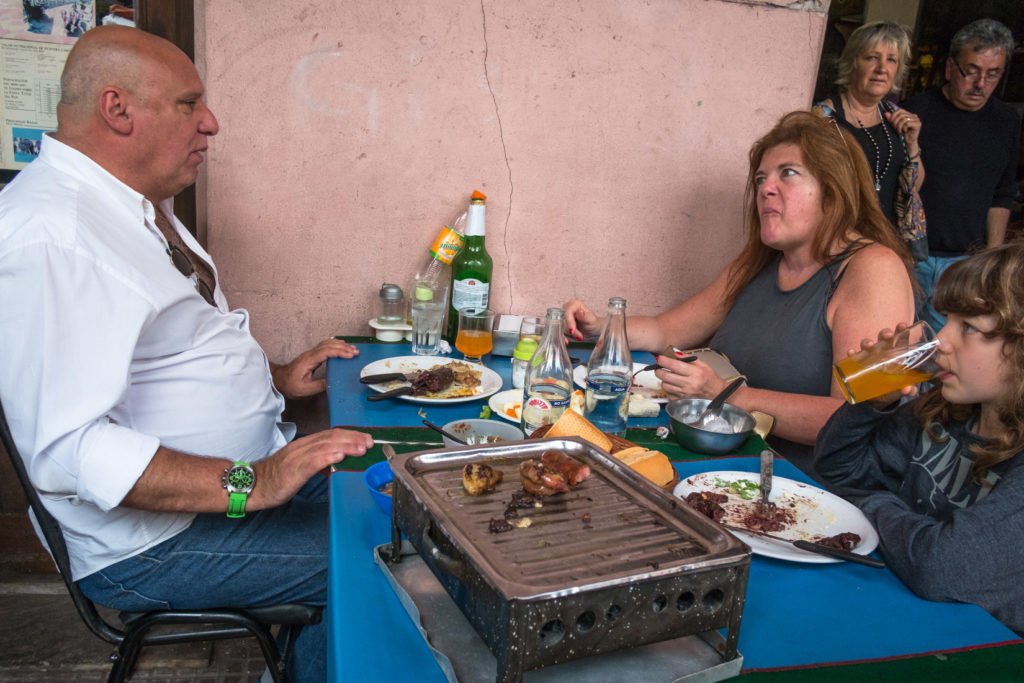 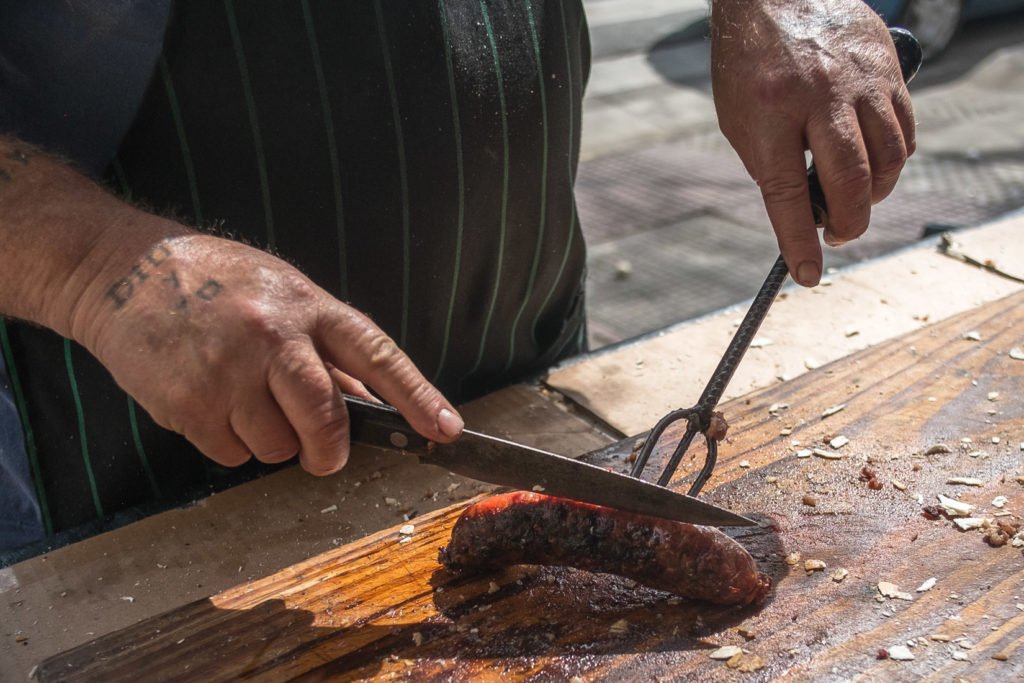 Argentines are crazy about football. And Buenos Aires is the epi-center of this national passion. More than half of the 28 clubs in Argentina’s first division come from the capital or metropolitan area. Not counting all the inferior league teams. There’s always a football match going on.

Even if you don’t buy a ticket, it’s fascinating to take images of the fans around the stadiums which are usually located in residential areas surrounded by normal houses.

As Argentine media covers football extensively, fans are quite used to getting photographed. When I was shooting before the ‘super clásico’ between River Plate and its eternal rival Boca Juniors I was often asked on which website the images were going to be published.

So just blend in with the crowd and don’t be shy. But always watch out – Argentines are passionate about the game and sometimes things get a bit hectic in the heat of the moment. 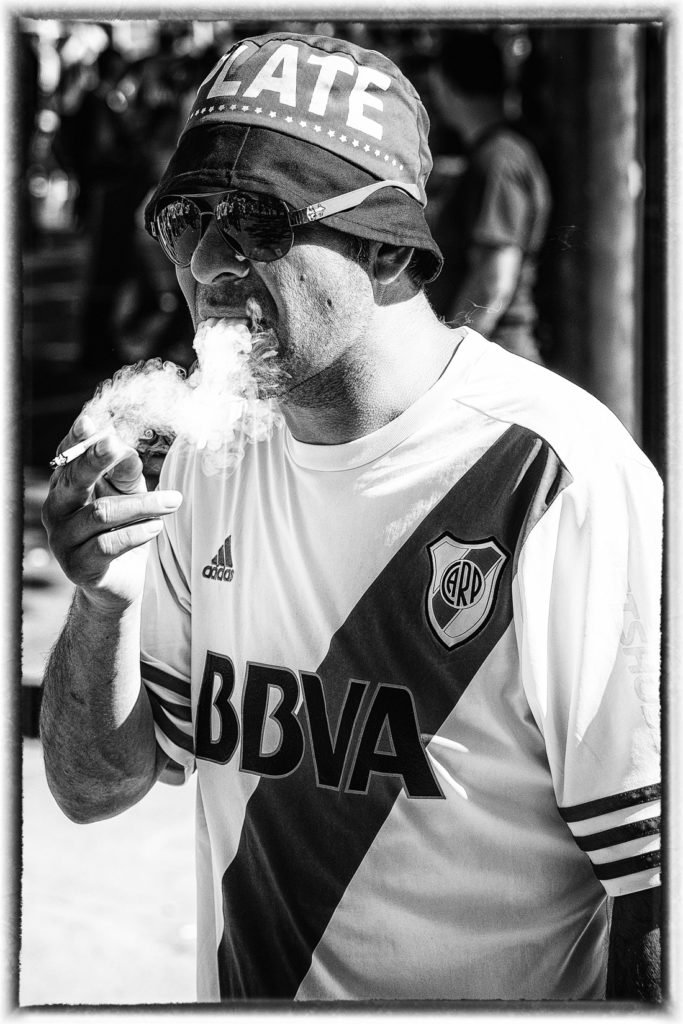 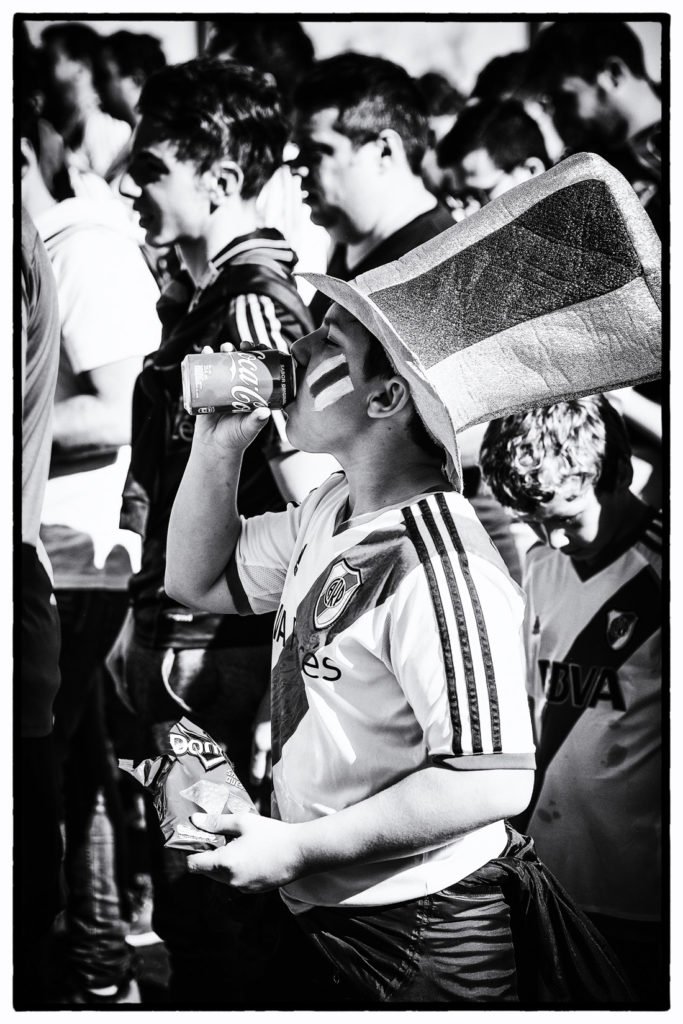 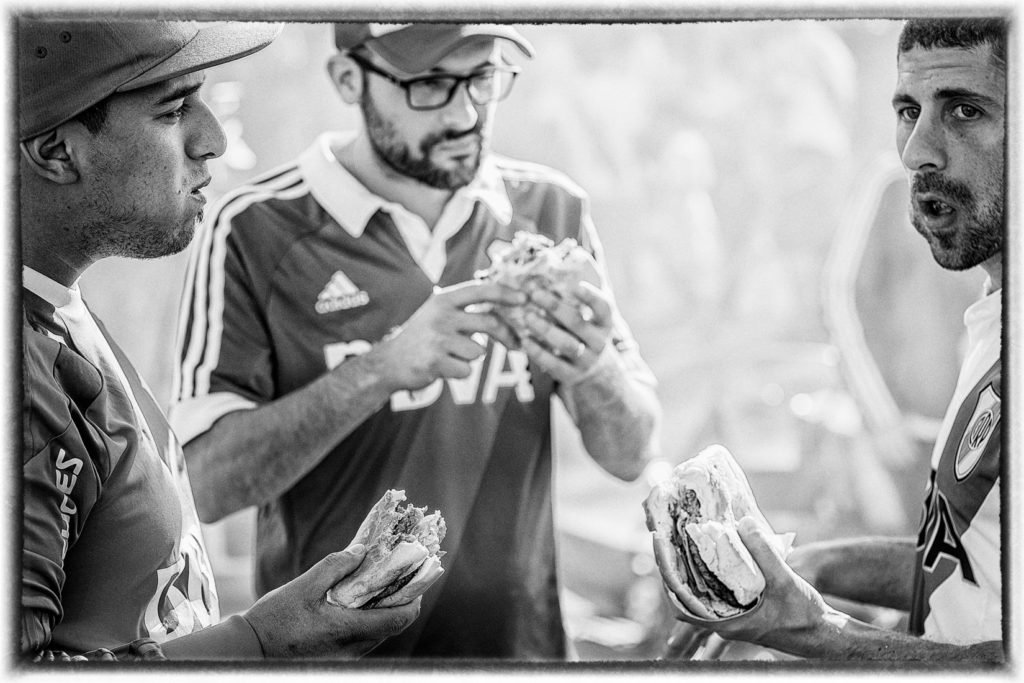 I consider Buenos Aires to be a relatively safe city. Especially during the day, you can freely walk in the center and all touristic neighborhoods without worrying too much about something happening to you.

Use some common sense and you’ll be fine. However, like all big cities you should watch out for pickpockets and protect your gear.

Make sure to hold on tight to your camera so that it can’t be stripped off easily. The shanty towns (“villas”) are mostly located in the outskirts. You should better avoid those areas as poverty and crime rates are rather high there. 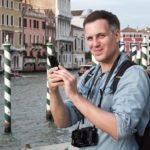 Kai Behrmann is an author and photographer from Hamburg, Germany. In 2009, he moved to Buenos Aires, Argentina, where he worked as a freelance journalist and discovered his passion for street photography. Roaming around with his camera and getting lost in the city is a meditative experience for him as well as a mean to make sense of the world. Besides capturing urban life in all its facets, he teaches photo workshops and curates the online magazine “The Art of Creative Photography”. In his podcast-show “Gate7” he talks about travel and photography as a ticket to explore foreign cultures and connect with people.

Readers planning to visit Buenos Aires are welcome to get in touch with him for further information.