The Italian Dolomites have been my home from home for a few years now. Two summers and a winter amongst the Dolomitic limestone peaks have allowed me to see this mountain range in all of its seasons and weathers and because of this it has always stood out as my favourite. It has hugely influenced my photography and has been my muse. Walking and climbing in such a diverse landscape couldn’t come any higher recommended.

When planning a European mountain holiday many people firstly think of the French, Swiss or Austrian Alps. Their dramatic peaks, cow bells, mountain huts and wildflower meadows are synonymous with the Alps and the infrastructure set up for Alpine tourism is rarely equalled. I have very fond memories of numerous visits to Grindelwald in Switzerland as a child, where, under the face of some of Europe’s most famous peaks, railways and lift systems whisk visitors up and away from the green valley floors into a world of glaciers, ice caves and tumultuous waterfalls.

It was with suspicion then that I regarded the Dolomites when first applying for summer work in the mountains. It was a place I’d not heard much about, overshadowed by the better known Alpine resorts further north. With a simple Google search I was greeted by the sight of sheer terracotta peaks, little white Tyrolean churches and wide, green valleys and immediately I fell in love. 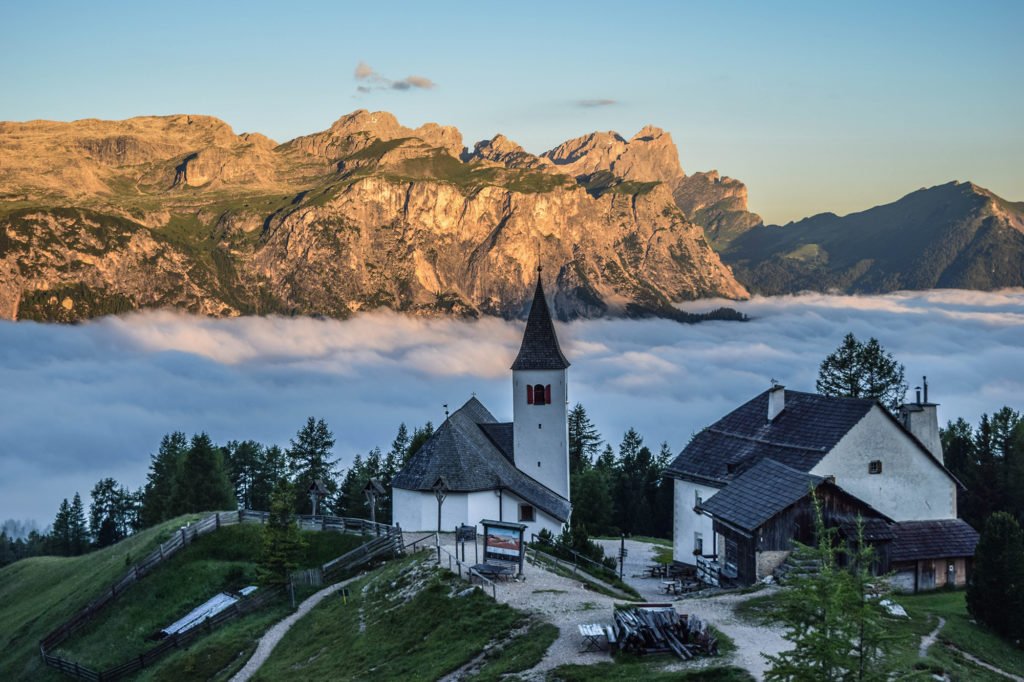 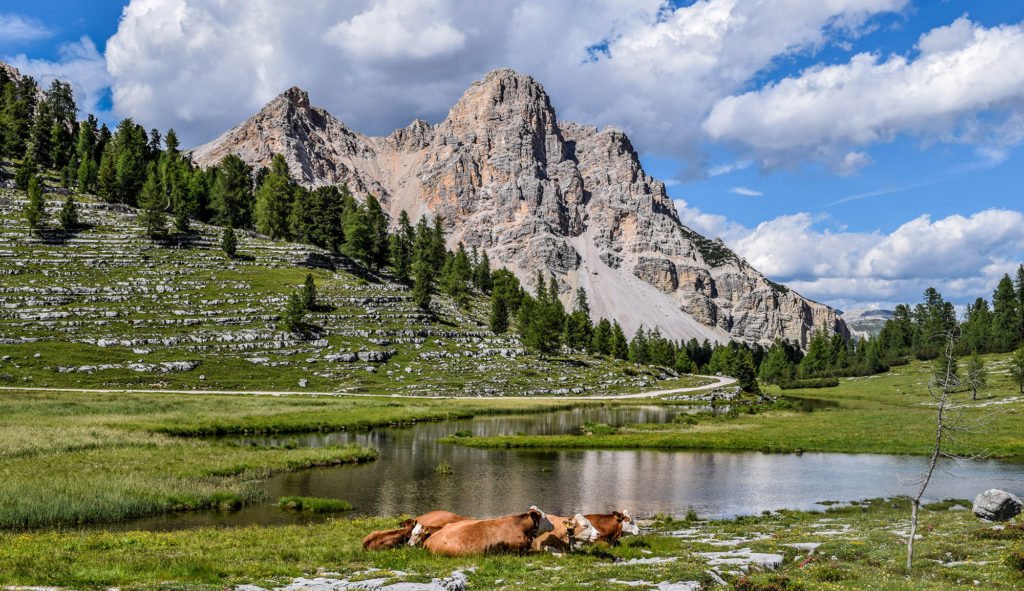 They don’t disappoint either. Whether approaching from Venice to the south or Innsbruck in the north, the first peaks loom unapologetically over sleepy Austrian/Italian style villages and towns, making it difficult for first time visitors to keep their eyes on the road!

The area itself has an incredible history. The region of the South Tyrol was once part of Austria-Hungary. When World War One spread across the mountains of Europe the area found itself at the heart of a battle for borders. In 1915 Italy offered to join the war on the side of whoever was willing to help them gain land that was once theirs at the time of the Roman Empire. The South Tyrol had been part of this collection of Roman land. The allies recognised that an attack from the Italians in the South would help to stretch Austrian forces that were already fighting on other borders and therefore the Allies promised the return of the South Tyrol to Italy when the war was over. 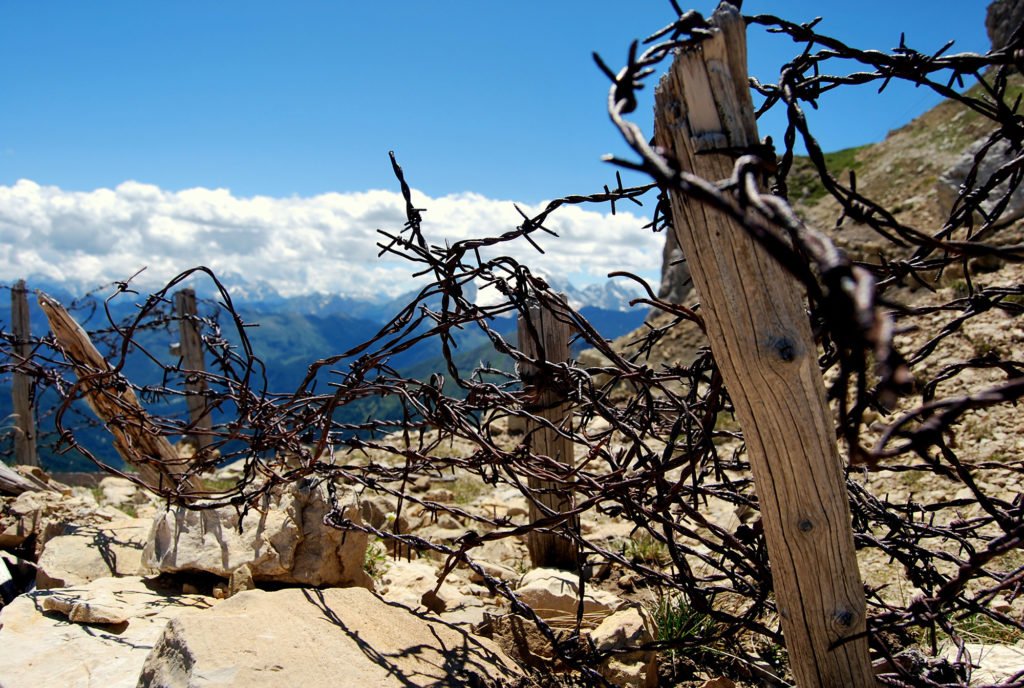 The fighting was fierce and unrelenting for two long years. The Austrian troops retreated up into the mountains and began to dig themselves deep into the rock. The Italians, acting on misinformation hung back from attack as they heard the Austrians were already well set up, when in fact if they’d gone in straight away the Austrians would have been underprepared and the battle would have almost certainly been quickly won. Instead the fighting lasted until 1917 with many losing their lives in the harsh winter conditions, living in glacial ice caves and tunnel systems burrowed deep into the rock. It was a war of attrition more than anything else. Little land was gained or lost for the duration until eventually the war was over and the Italians broke the line.

The fighting has left its mark on the Dolomites, even after all this time. The tunnel systems, via ferrata routes (iron ways built to scale the mountain sides without the use of climbing equipment), trenches and fortifications still survive as a sobering reminder of the place’s past. Now many of the tunnels are part of walking and climbing routes and the via ferratas are maintained by the local Alpini, making it a popular destination for mountain enthusiasts. On my free days from work we would regularly head off to scale a VF or climb amongst the trenches of Cinque Torri (the Italian front line). Some of the VFs have even experienced movie fame in the Stallone film Cliff Hanger, including the long bridge of Ivano-Dibona. 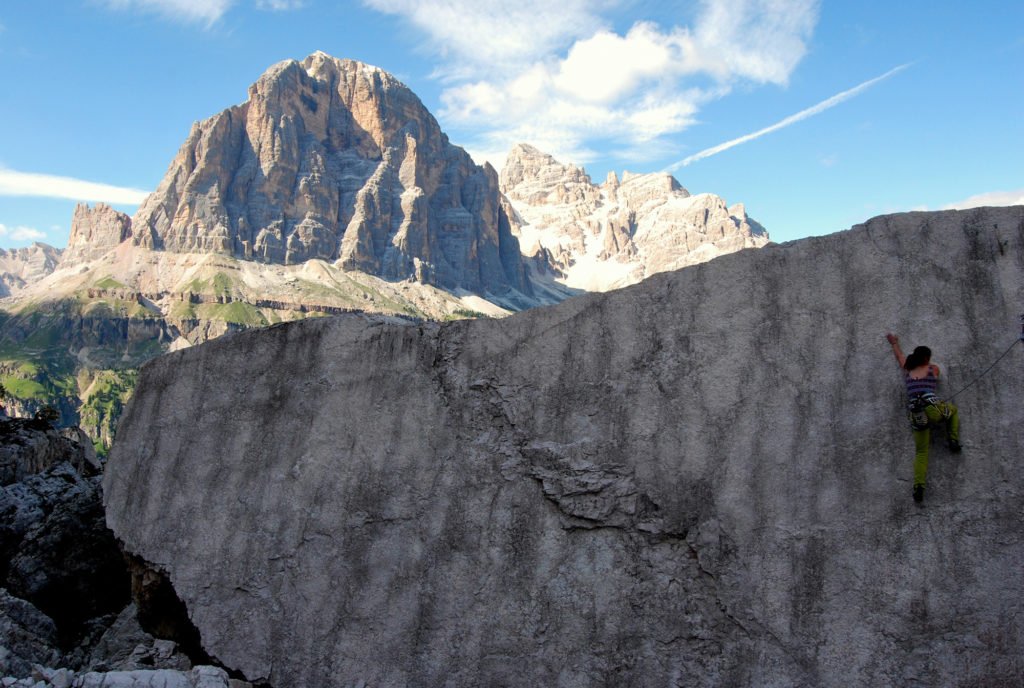 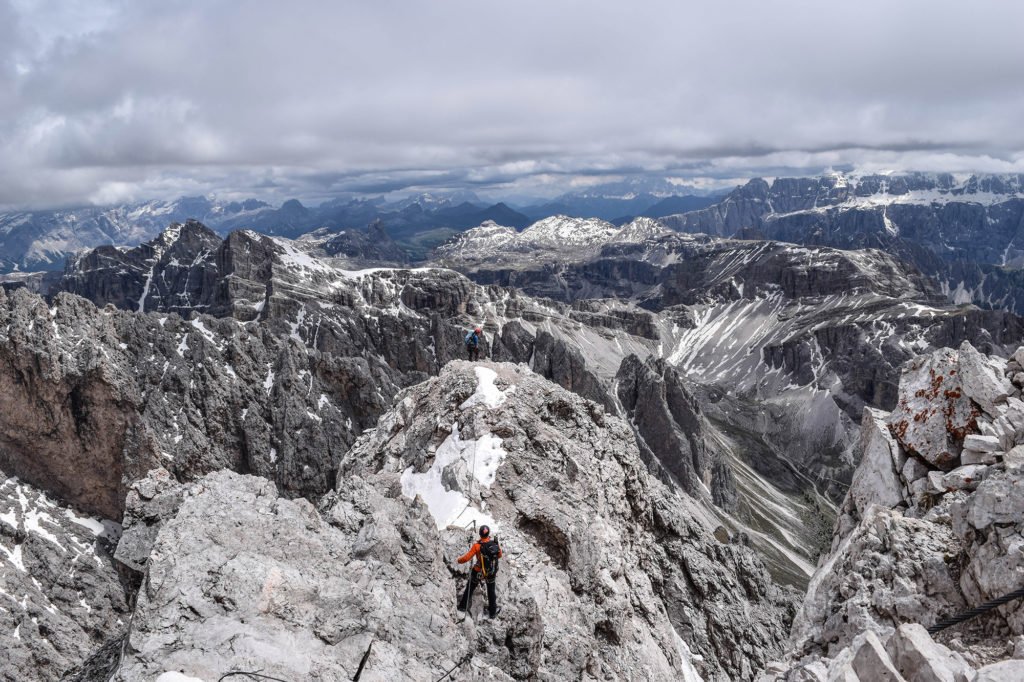 These locations lend themselves perfectly to photography. Many of the dark, damp tunnels have little windows in the rock that open out onto the Dolomites. The beautiful views are stark in comparison to the harsh history surrounding it. Similarly the reward for summiting the metal and rock of a via ferrata is how high it pulls one up and away from the ground. Instead of taking pictures of these stunning mountains I take mine from them. I shoot with a Nikon D3500, which is for me the perfect trade-off between size and image quality. The images it takes are crisp and it copes well with the light difference between the rock and the views. It takes a bit of battering, slung around me as I climb, but is light enough not to be a burden. Any bigger and I think it would be a pain on these mountaineering routes. The D3500 has it about right. 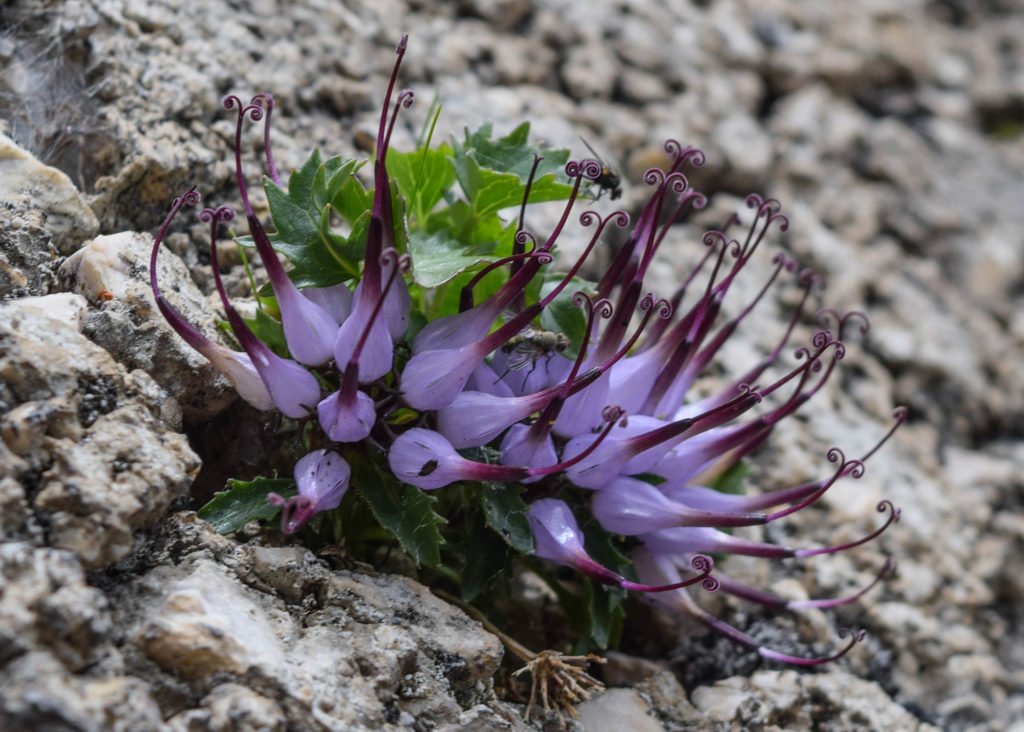 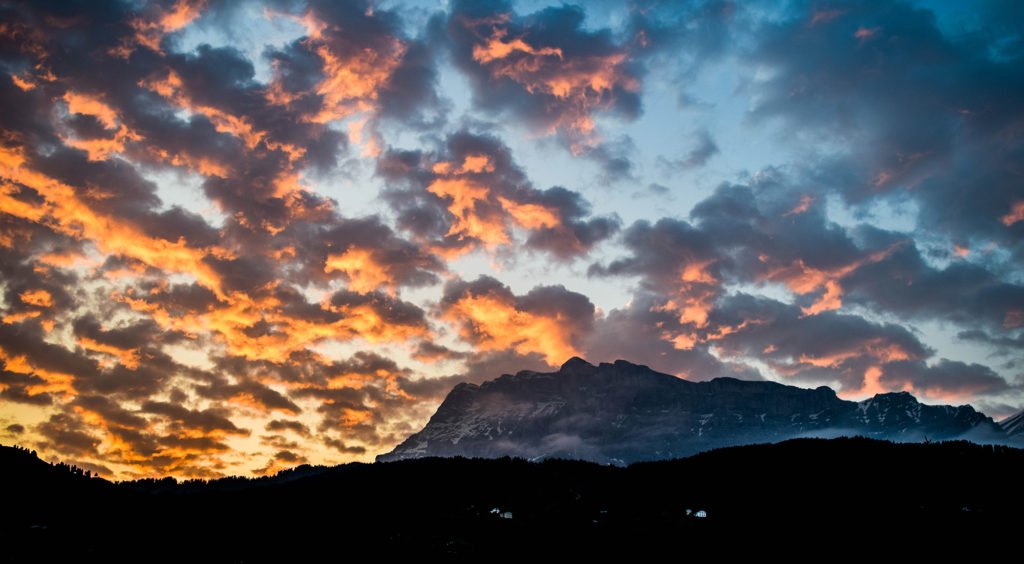 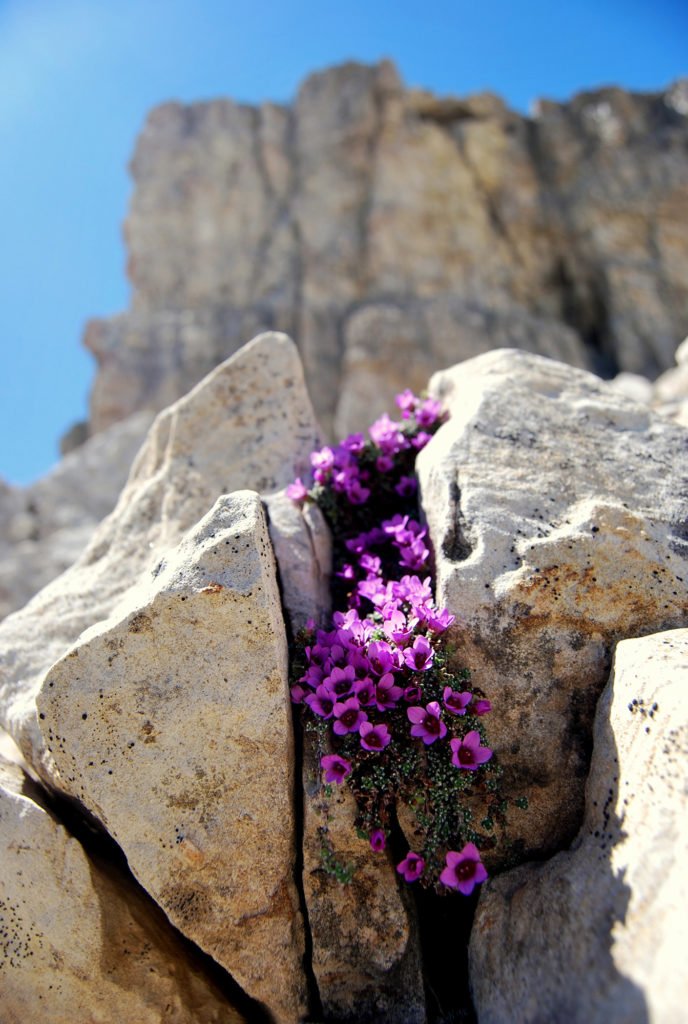 Flowers on the Lagazuoi

The change of border post war has also had its effect on the culture in the Dolomites. Although you may think you are heading to Italy, many of the locals will speak German and there is a distinct Austrian influence on the buildings, traditions and food served locally. It is not unusual, for example, to see beautifully made Italian pasta dishes sitting next to warming dumpling broths, side by side on a menu. The pizzas live up to the standard of Sicily and the stews would warm the heart of any alpine walker used to Austrian mountain food.

The native people of the area are the Ladin. They have their own language again which derives from Latin and sounds like an eclectic mixture of German and Italian when spoken. Depending on which valley you are in any one of three languages may be predominantly used. “Hallo”, “Buongiorno”, or “Bun dé” all work as greetings on the mountain paths though and most locals are happy to switch freely between any of the languages, putting many tourists (myself included) to shame!

The Austrian/Italian fusion makes for no shortage in subject matter in the valleys too. Traditional dress is very similar to the dirndls and lederhosen of Austria and the music is that of brass and horn. Local festivals are always a colourful affair, partly through tradition and party to honour the growing tourism in the area. I love to use this coming together of cultures in my work. The warming, farming lifestyle runs strongly through the towns and villages and yet a sharp, Italian pride dictates mountain fashion and softshell clad mountaineers often stride about the place. Photographing a local in traditional dress can be like a portal to the past. Yearly war re-enactments serve the same purpose, for example this picture of a man in WW1 uniform walking across the Lagazuoi summit in front of Tofana, rifle to his shoulder. 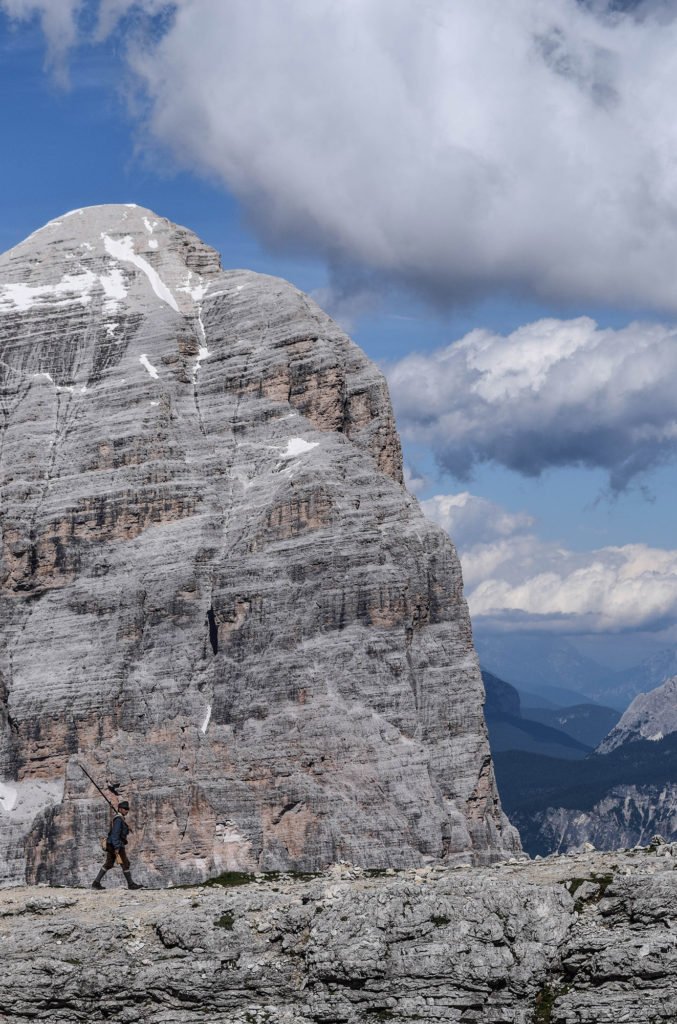 WW1 soldier at the Lagazuoi 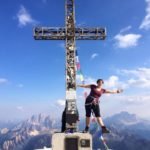