If you’ve been following me for a while, you might know that I consider post-processing an integral part of my creative workflow. As a consequence, I tend to shoot RAW files, without paying much attention to how the image looks on the LCD on the back of my camera, knowing that I will almost always tweak it in post to a small or large degree.

Now, I’m not one of those who spend hours editing a single image. If I can do it in 10 minutes and using only Lightroom, without opening Photoshop, I’m more than happy. I know I could probably shoot JPEG files for the most part, but I still like the idea of having almost infinite options. In addition, I often take bracketed shots for later blending.

In other words, I’m not much of a straight-out-of-camera photographer.

That said, I’ve recently started switching my second camera, the Fuji X100s, to JPEG-only mode more often. I do it when I’m walking casually in a city and doing some street photography. In those cases, I will often shoot in black-and-white only. I do this to remove unnecessary choices and distractions. When I’m using the X-T2, on the contrary, I’m always in RAW mode (or RAW+JPEG, with the former going to memory card 1 and the latter to card 2).

For those rare times when I’m shooting JPEG, with little intention of doing any post-processing later, I realize I have to switch gears from the “I’ll fix it later” attitude to the “I must get it right in camera” one and pay more attention to light and exposure. Having read Gordon Laing’s book, “In Camera”, I feel I am much better equipped to do that now.

This book is a collection of one hundred beautiful photos, all of them coming straight out of camera, with minimal or no post-processing (though most of them were cropped to fit the book’s format). Each photo is accompanied by a description of the circumstances in which it was taken and of the camera settings that were employed.

Gordon is famous for being the owner of Cameralabs, one of the foremost photo equipment review sites. Each one of his reviews is painstakingly detailed, but for one who might sound like a total geek, his photography is refreshingly immediate and natural. Gordon’s photography is on average very good, with some truly outstanding examples.

Most of the photos were taken during Gordon’s travels across the world, so there’s lots of variety there: landscape, cityscape, architecture, food, people. So, even if one just wanted to admire some great photography and leave the technical explanations aside, this would make for a great coffee-table book. To me personally, there is also the fact that many of those photos were taken during trips that we took together–to England, Ireland, and Scotland–so they bring back memories I’m very fond of.

If I absolutely had to find something to complain about the choice of subjects is that I would have liked to see more travel portraits, but that’s just me. This is a book that can be read cover-to-cover, but also picked up and opened at random. Each photo and the accompanying story stand on their own.

You can buy the book on Amazon through this link. If you do, I will receive a small commission, but the price for you is absolutely the same.

Gordon was also the guest of episode 74 of my podcast. You can listen to it here: TTIM 74 – Gordon Laing “In Camera”. 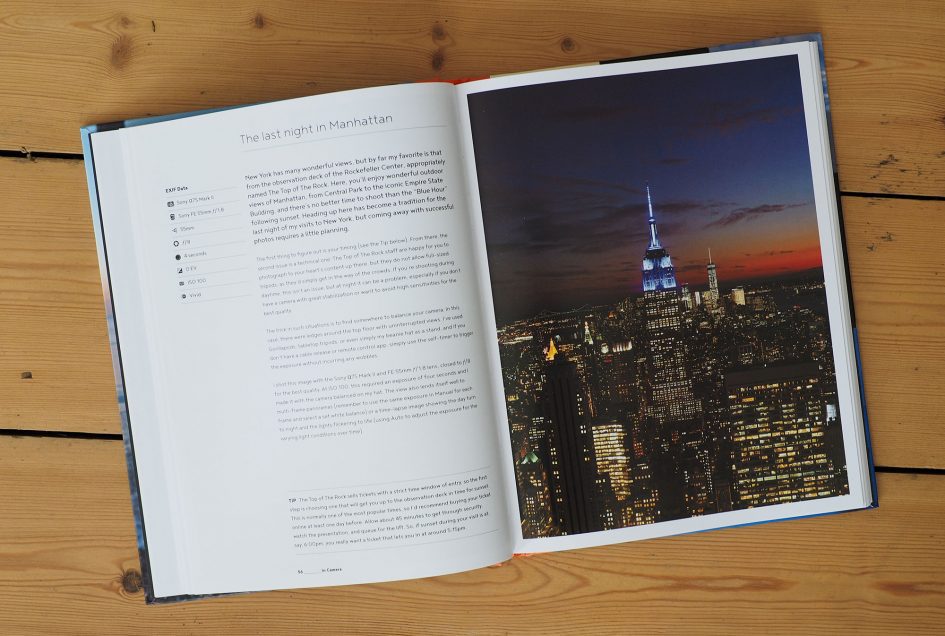