Recently I’ve been doing some experiments with high speed flash photography and wanted to share the method I used with my readers here. While I still have a lot to learn in this field, I am getting good results by following the steps I have outlined below and using a modicum of reasonably priced equipment. 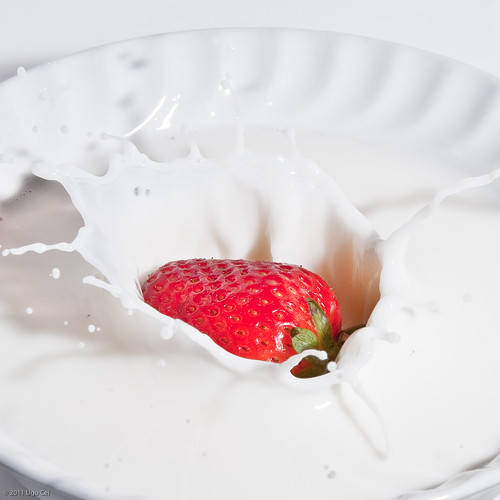 You might wonder why a speedlight is needed and ask yourself why you can’t get the same results by using a very fast shutter speed. Actually, you could, in theory. In practice, though, this is harder than it sounds.

For one thing, the fastest shutter speed that you can select on a typical camera is between 1/4,000s and 1/8,000s. My D90 doesn’t go faster than 1/4,000s. While this is a respectable speed, it can still introduce motion blur for subjects that move very fast (think bullet smashing through a lightbulb). Even if your subject isn’t very fast, in order to get capture enough light for a good exposure, at 1/4,000s you must use a very large aperture, a high ISO, and have a very powerful source of continuous light. A large aperture might not give you enough depth of field, and high ISO means noise. If you don’t have motion blur, you get blur due to lack of focus and noise reduction. Not a good idea, I think.

So, if we can’t leave the shutter open for such a small interval, we will keep it open for much longer and use a short burst of flash light to freeze the motion of the subject. You might not be aware of the fact that the duration of the flash emitted by most speedlights can be very short. The effective duration is actually a function of the power that is required from the speedlight: the lower the power, the shorter the burst. For my Nikon SB-900 in manual mode, flash duration is 1/880s at full power and goes up to 1/38,500s at 1/128 output. This makes for stopping pretty fast moving objects.

This, however, leaves us with the issue of timing the very short burst of flash with the interesting moment in the trajectory of our projectile. It would definitely be possible to use light- or sound-activated triggers for this, but I have none at my disposal. Fortunately, it turns out that, for subjects that move relatively slow, like the strawberry in the picture above, manually triggering the flash at the right moment is easier than it might seem. With a bit of practice, you can become very precise and your timing can get pretty repeatable.

With this in mind, our sequence of events becomes:

Now, the time that it takes you to move away from the camera, or drop the remote release, place the subject at the starting position, if necessary, start its motion, trigger the flash, and close the shutter, having picked up the remote release again, can be on the order of a few seconds, unless you have three hands or an assistant. Even with the latter, you will still need a second or more to coordinate everything.

This brings us to realizing that this technique requires the camera shutter to be open for a relatively long time, possibly a few seconds. What you want to avoid, during this time, is letting the sensor of your camera capture enough ambient light that it starts being comparable to the exposure given by the flash, therefore “polluting” your image with the contribution from the ambient. To avoid this effect, you can use a low ISO combined with a small aperture. Your aperture, however, cannot be too small, because this will require having a more powerful flash from the speedlight. Basically, with a shutter speed on the order of seconds, you will be forced to operate in the dark.

I did the above shot during the day, but closed all the windows’ shutters and all the doors of the room. It wasn’t totally black, but I could barely see the contours of objects with my eyes, so I had to turn the lights on in order to set everything up, then turn them off again before shooting. Having a flashlight can be helpful too. What you want to do is to set an exposure that, with your chosen shutter speed, results in an almost completely black image.

Another thing that you must do before turning the lights off is setting your focus. Put the subject where you want it to be when the picture is taken, like the strawberry in the middle of the bowl, and set the focus. You should switch the lens to manual focus in order to lock it afterwards.

The next thing you must do is setting the right flash power level. Leave the strawberry inside the bowl, set the speedlight at some power level like 1/16, turn the lights off, open the shutter, fire the flash, and close the shutter. Now check the exposure and focus and correct as required. Remember that you have three variables that you can use to adjust the exposure, without changing the contribution from ambient: flash power, flash distance, and aperture. Don’t change shutter speed or ISO, because the first will have no effect on flash exposure, and the second will change ambient exposure. If you can get closer with the speedlight, do it. There’s no point in wasting power by keeping the light source far from the subject and remember that halving the distance will gain you two stops.

I have to admit that I forgot to include one very handy piece of equipment in the list above: a computer for shooting tethered. Being able to immediately look at the results on a large screen, without poring over the camera’s back LCD, which might be in an uncomfortable position, can save you a lot of inconvenience and grief. For the Mac, I recommend Sofortbild, which is free.

At this point, you should have locked your focus and exposure and it’s time to set the shutter speed. You can either use B (for “bulb”) or a speed of a few seconds. In my experiments, I ended up setting it to 3s, which gave me enough time to carry out all the necessary steps. I tried using B first, but kept forgetting to close the shutter at the end.

Now it’s time to pick up the remote shutter release and turn the lights off. At this point, I normally picked up the strawberry and kept it above the bowl with one hand, holding the remote release with the other one. Open the shutter, put the remote down and put your finger on the test button of the flash (did I tell you that having an extra hand would have been useful?). If you have a remote trigger for the speedlight, more power to you! I just ordered a pair of Cactus V5 radio triggers, but I still do not have them.

This is where it gets tricky: you have to drop the strawberry and, after a fraction of a second, press the speedlight’s test button. More often than not, one of these things will happen:

If any of these things happens, rinse and repeat. When I say rinse, I do not mean it figuratively: I had to throw away a number of pictures that were timed perfectly because the straberry was dirty with milk. You want it to be unspoiled the moment it hits the surface.

After a number of hits against the rim of the bowl, the strawberry will be rendered unusable and will have to be substituted. Keep a number of good-looking strawberries at hand. You will spill milk all over the scene. Use a plastic sheet to cover the table and make sure you have lots of tissue to dry it up from time to time.

After a while, you will get a feeling for the exact timing and will start to get some candidates. Look for those with a nice shape for the splash and a pleasant orientation for the strawberry. At this point, you will realize that you lighting was too flat, you are overexposing the milk, you have drops on your lens, or some other issue that spoils the shot. Too bad, but don’t give up, these things happen. Fix the issue and repeat.

Personally, I think the image above, which was the result of a morning of set-up and trials, still has many issues, but I am going to try again and do better next time. To wrap up this tutorial, I have one more image, this time with a glass of water. This was even harder than the one above: because the glass’s mouth was pretty narrow compared to the size of the strawberry, I ended up hitting the rim or completely missing many many times, but succeeded in the end.