Philadelphia has been called both the “city of neighborhoods” and the “city of parks”.  Either way, Philadelphia has many unique areas with a mix of old and new architecture that sometimes abut one another.  Some of these are historical landmarks from America’s revolutionary era while others represent specific architectural eras like the Baroque period exemplified by the old Lit Brothers building on Market Street.

For most of the city’s modern history, there was an ordinance in place that prohibited any new buildings from being higher than “Billy Penn’s hat” (a large statue of William Penn rests atop City Hall).  Once the ordinance was abolished, modern skyscrapers began springing up mostly in the uptown area at 17th Street and above keeping the historic district mostly unaffected. 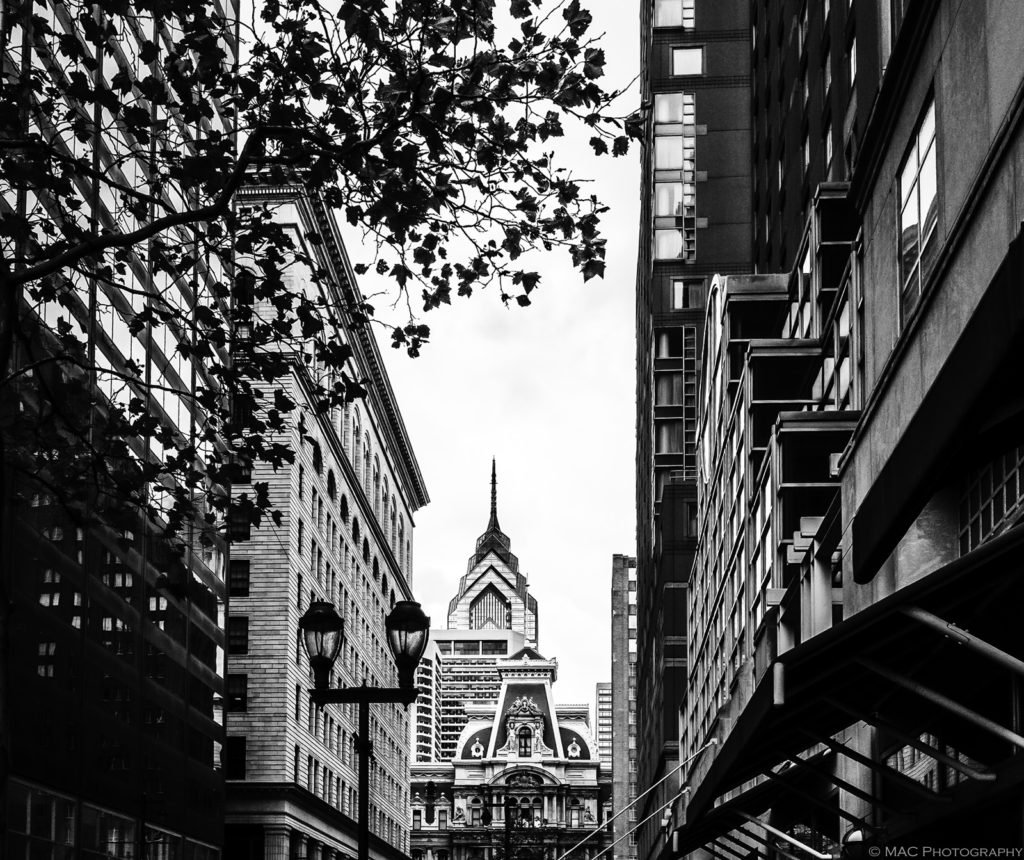 A wing of City Hall sits in front of the modern Liberty One office building seen from Commerce St. 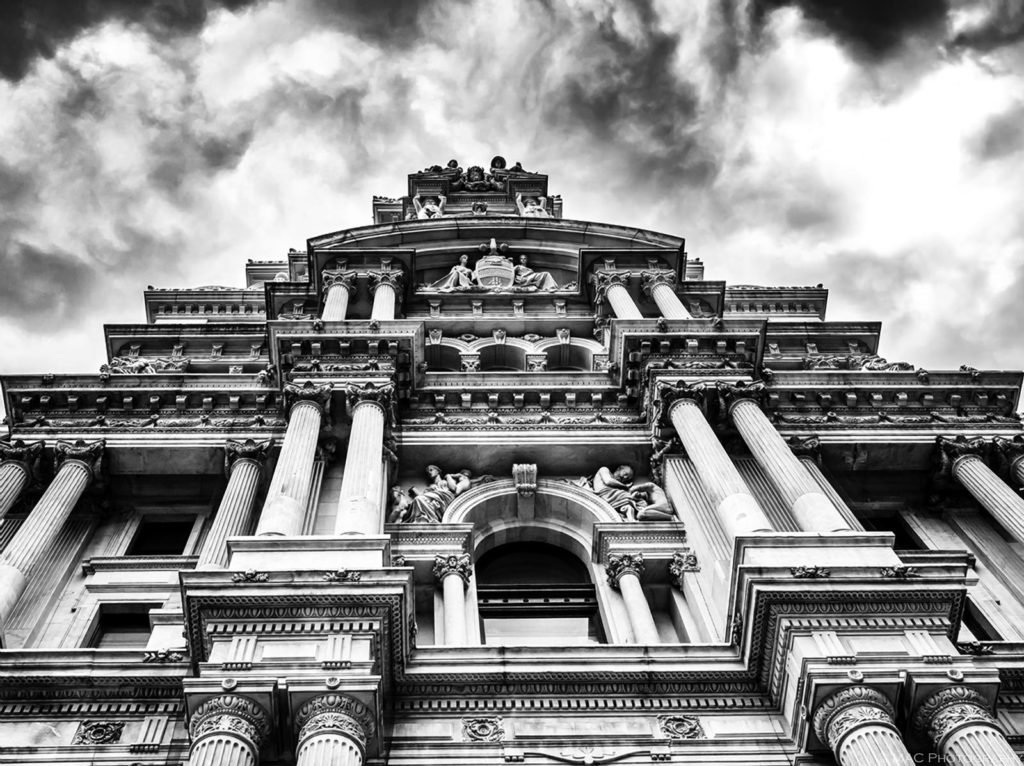 “Seat of Power” – looking up at the main edifice of City Hall. 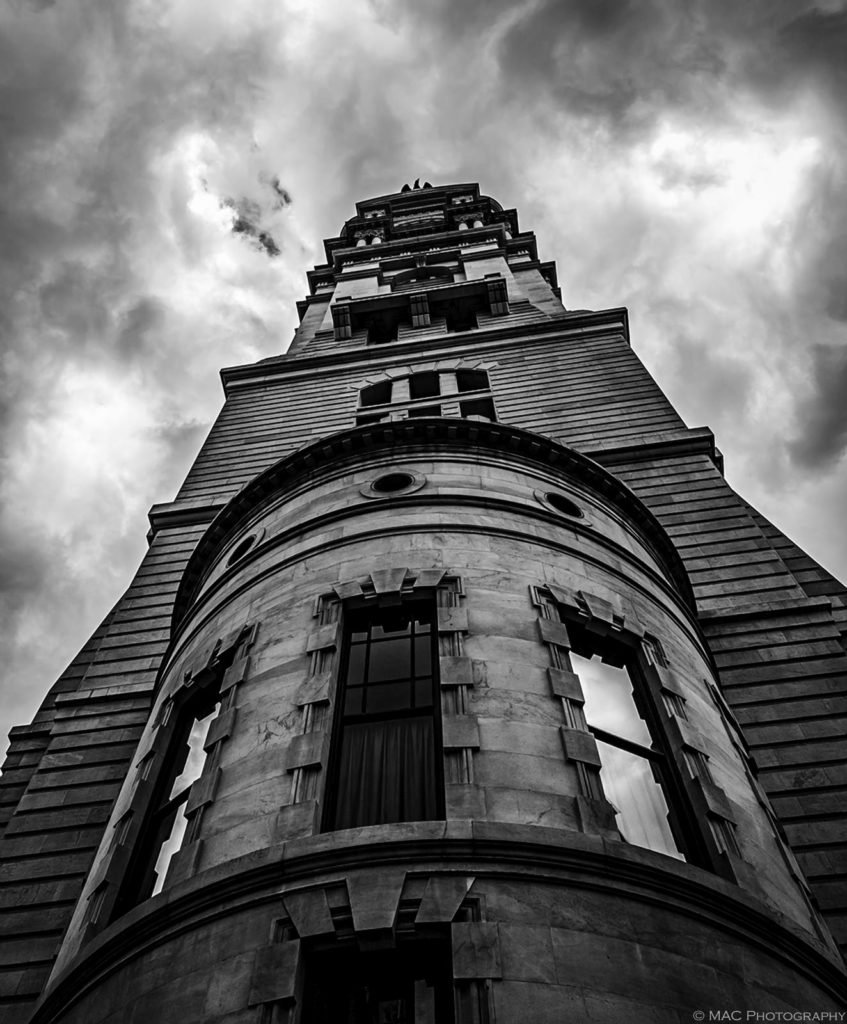 “Where Eagles Dare” inside the courtyard of City Hall 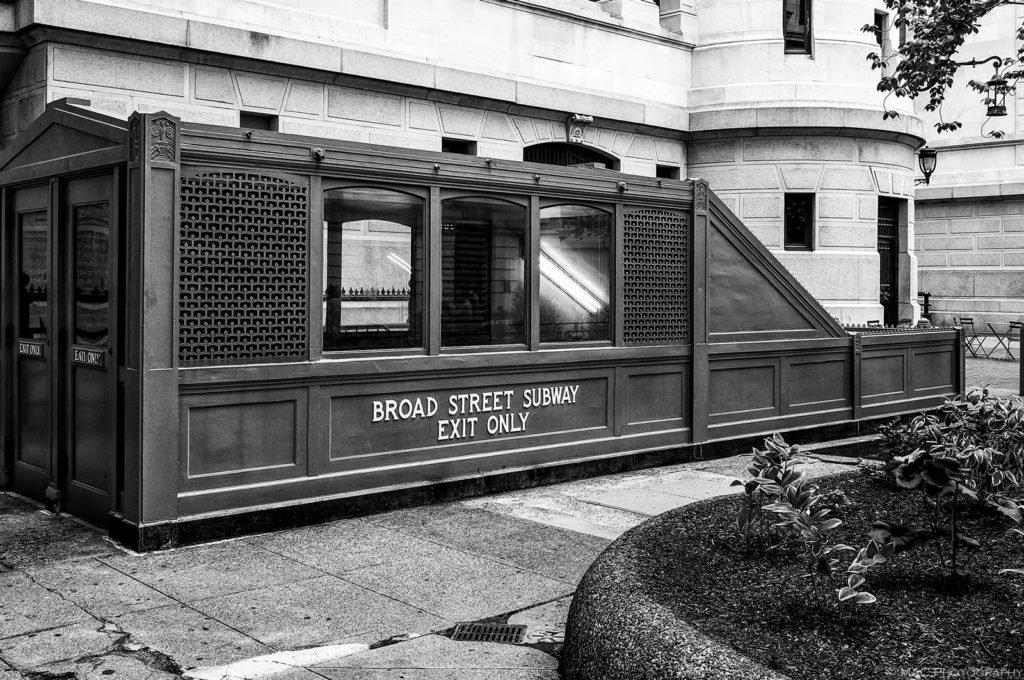 Subway station inside the courtyard of City Hall

The fountains at Dilworth Plaza sit on the opposite side of City Hall facing the uptown area. Dilworth Plaza also hosts an ice rink in the winter months. 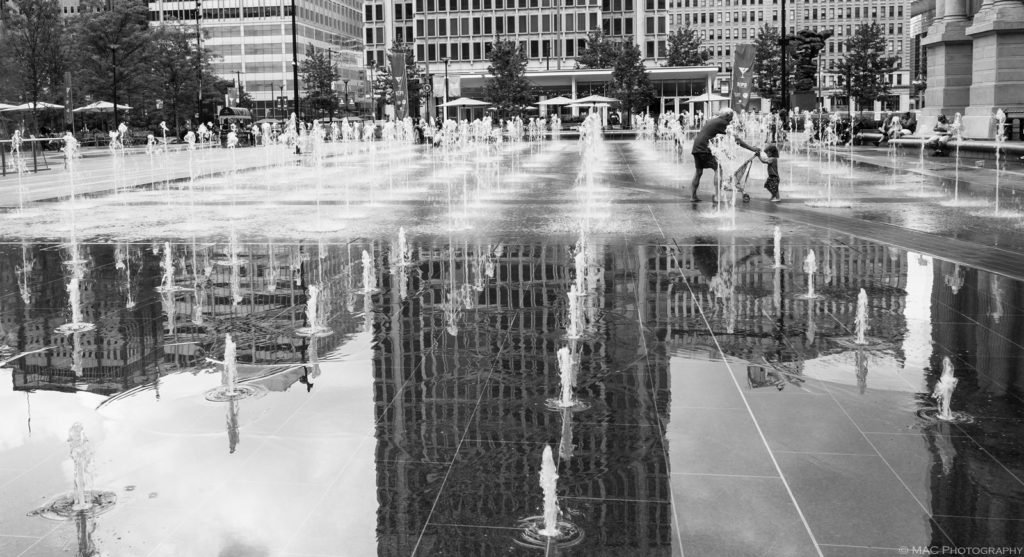 Dilworth Plaza in the summer

Sitting at JFK Boulevard and Broad Streets on the plaza at the Municipal Services Building, the “Government of the People” statue by Jacques Lipchitz. Looking up at the statue from the plaza where it sits, it is an enigma as to what it represents until you read the plaque with its title. The statue in my mind perfectly represents the disorganization and competing interests of any government enacted by people. In the picture below, the spire of the Arch Street United Methodist Church sits in the background and provides an unintended point for the separation of church and state enshrined in the Constitution. 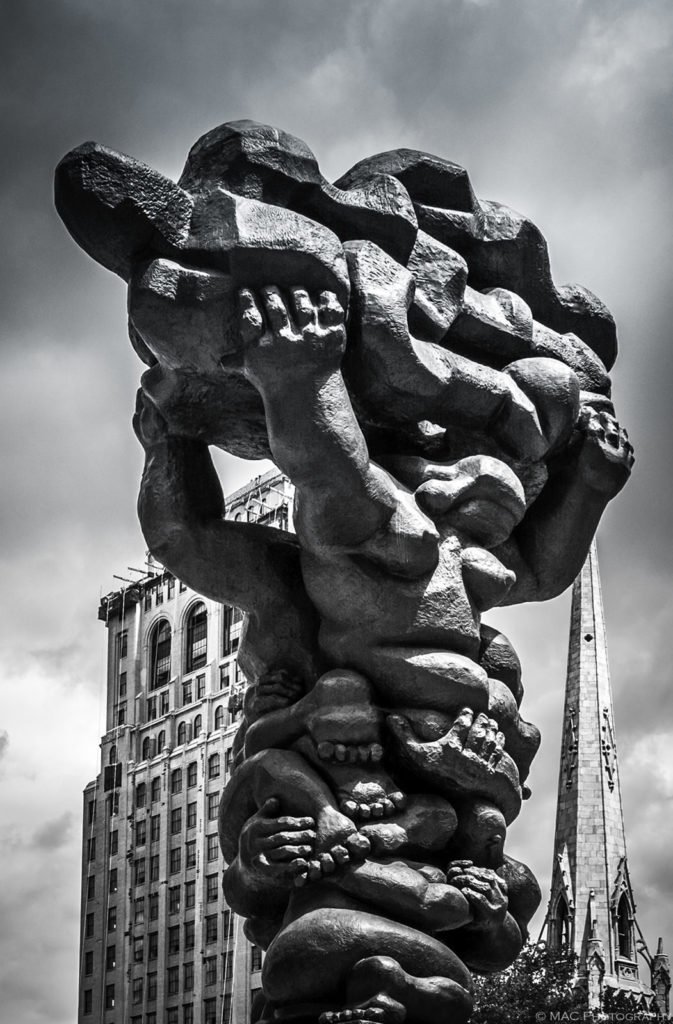 “Government of the People” by Jacques Lipchitz

Directly across 15th Street from your view of Government of the People is John F. Kennedy Plaza. The plaza gets its nickname “LOVE Park” due to its famous sculpture “Love” by the artist Robert Indiana. It was first placed in the Plaza in 1976 as part of the United States’ Bicentennial celebration. The plaza was designed by the former Philadelphia City Planner, Edmund Bacon (father of the actor Kevin Bacon). The park sits diagonally across from City Hall and offers a panoramic view down the Benjamin Franklin Parkway which ends at the Philadelphia Art Museum. At Christmas time, the park hosts a European themed Christmas Market like those that you might find in Germany during the Christmas season. 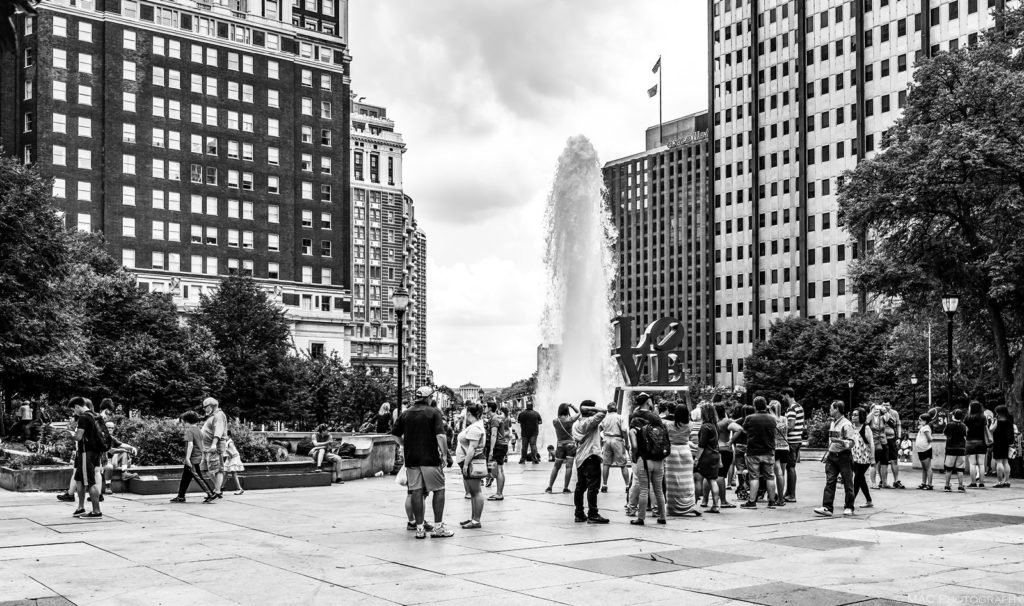 Walk a few blocks south from City Hall to 12th and Arch streets and you’ll arrive at the Reading Terminal Market. Established in 1892, it is the “nation’s oldest continuously operating farmers’ market”. The Market occupies the ground floor and basement levels of the old Reading Terminal’s former train shed.

Walking through the Market your senses are deluged with an almost overwhelming variety of different sights and smells from the food stalls offering their daily fare. You can find virtually any type of food you may want to try including some South Philly favorites.  The Market also has various stalls where fresh produce and meats can be purchased daily. Traditional Pennsylvania Dutch fare is also available from the largely family-run stands in the Market although some of these stands are only open a few days a week. While you’re here don’t forget to try an authentic Philly Cheesesteak. 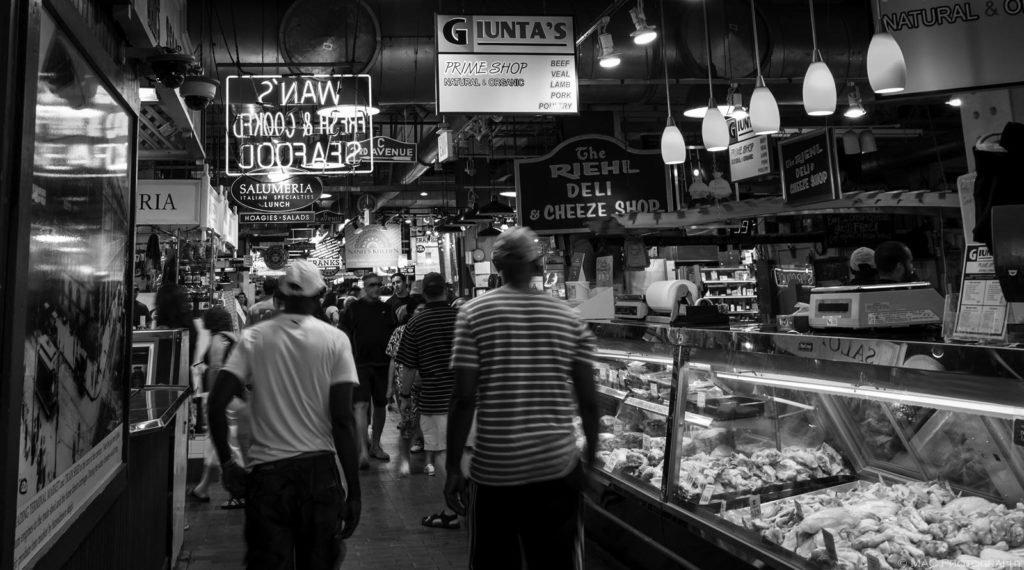 Inside the Reading Terminal Market 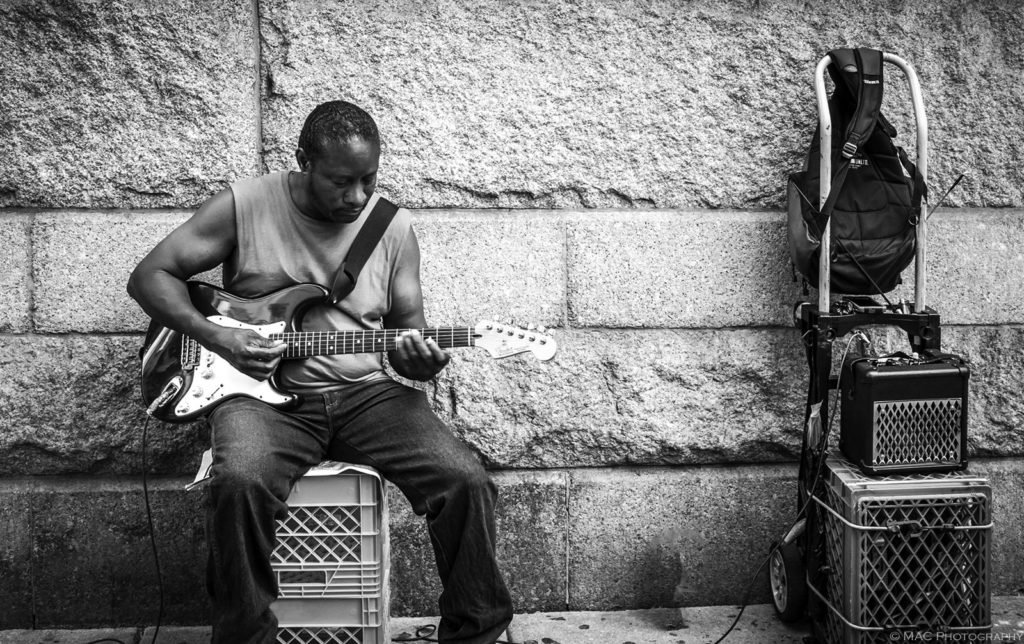 Continue your tour by exiting the Market on Arch Street and walking down to 10th Street. Turn to your left now and the 40-foot Chinatown Friendship Gate will be immediately in front of you across the street. The Gate marks the entrance to Philadelphia’s Chinatown neighborhood (as in many major US cities). While known as “Chinatown” it is really an international neighborhood featuring shops, festivals, events and food from a wide variety of Chinese, Korean, Vietnamese, Thai and Burmese businesses. 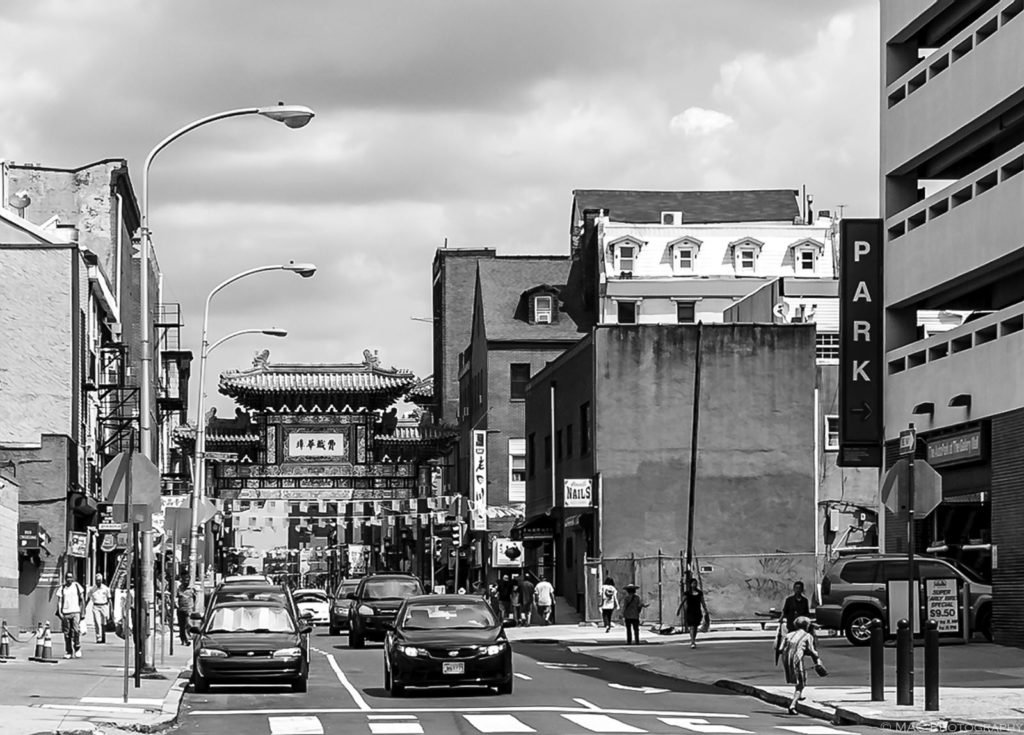 Moving on to the Historic district (also known as Old City), walk four blocks South down to 6th Street and hang a right turn.  Continue walking down 6th Street until you hit Independence Mall on your left. 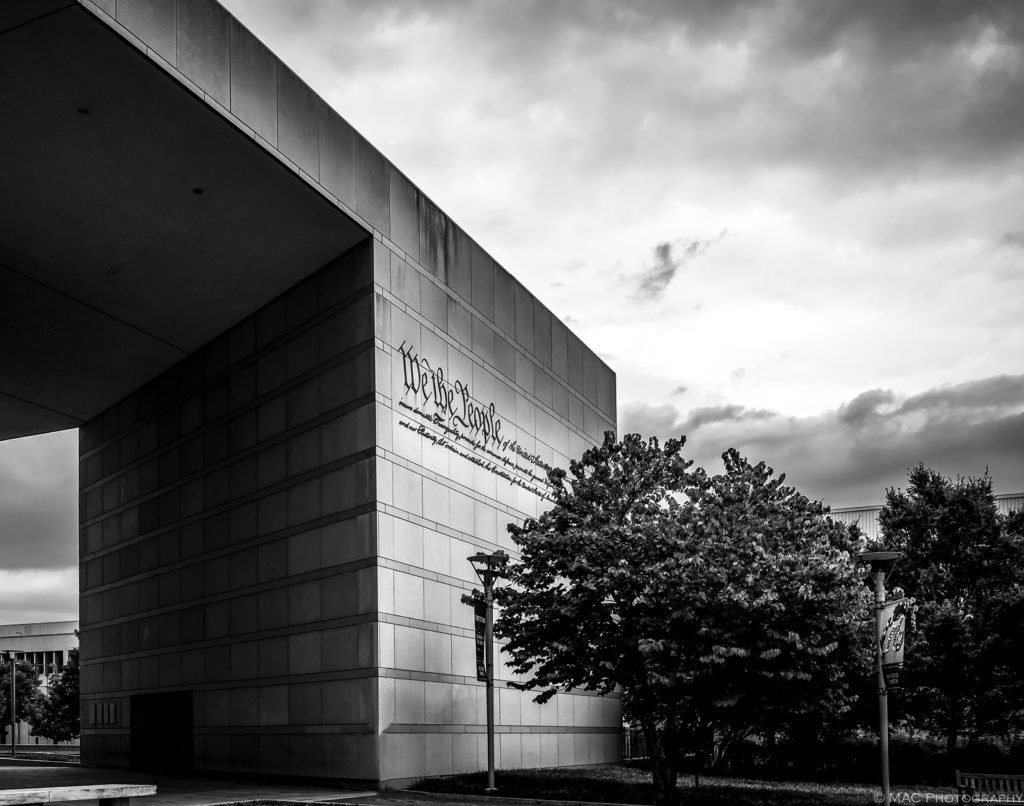 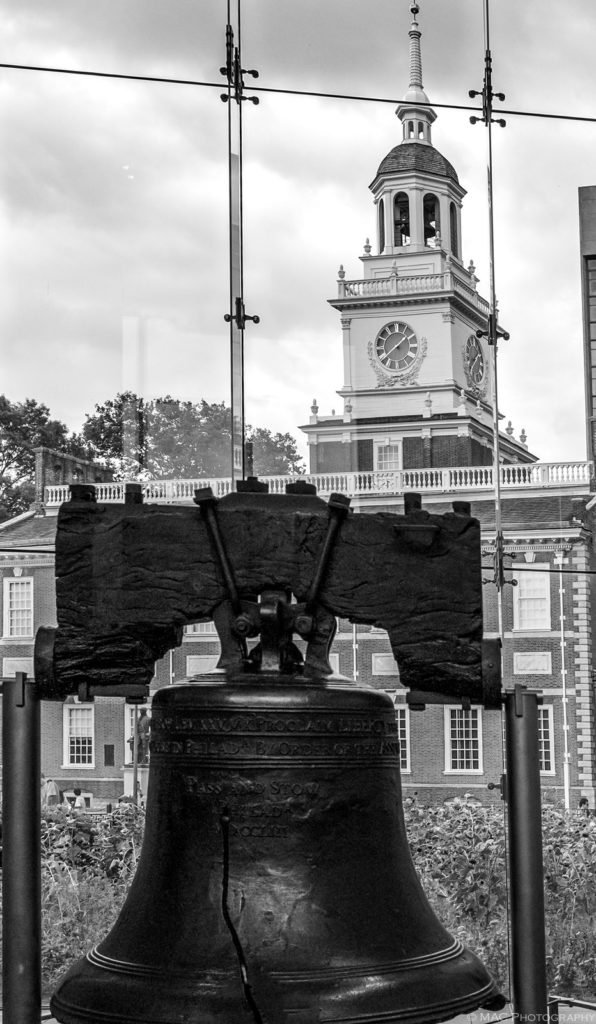 The Liberty Bell with Independence Hall in the background

Continue walking down 6th Street to Independence National Historical Park where you’ll find Independence Hall. Located on Chestnut Street between 5th and 6th Streets, be aware that the Park is a security screening area with measures like those that you will find in airports. I used to work in a building at 5th and Walnut Streets in an earlier life and the park was a frequent after lunch visit to walk around during the warmer months. Of course, that was during saner times before 9/11. 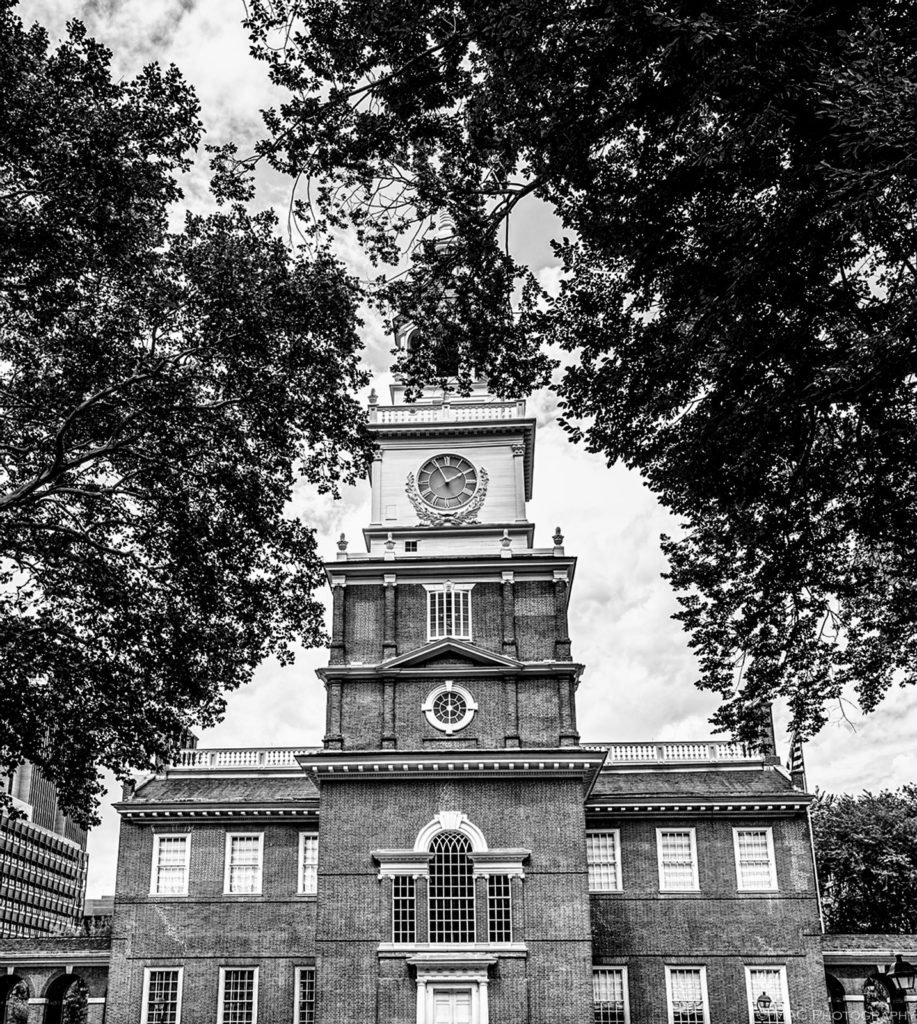 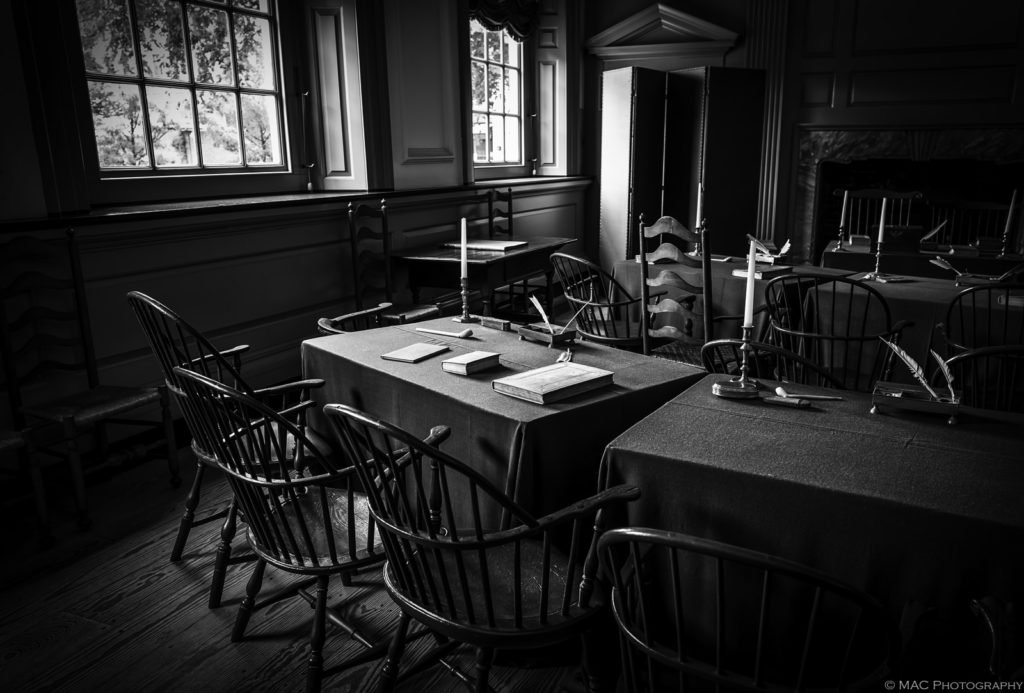 The tomb of the Unknown Revolutionary War Soldier is the main monument in the park. It’s not known whether the remains interred here are Colonial or British. The park is dotted with a variety of trees and benches which makes for a wonderfully shaded area for a rest in the heat of the summer. 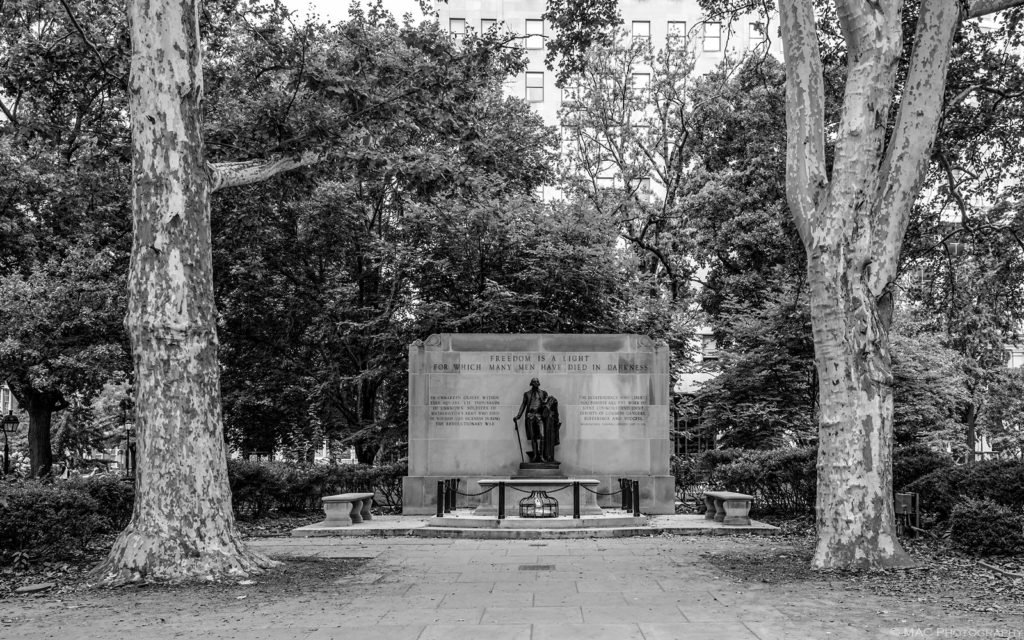 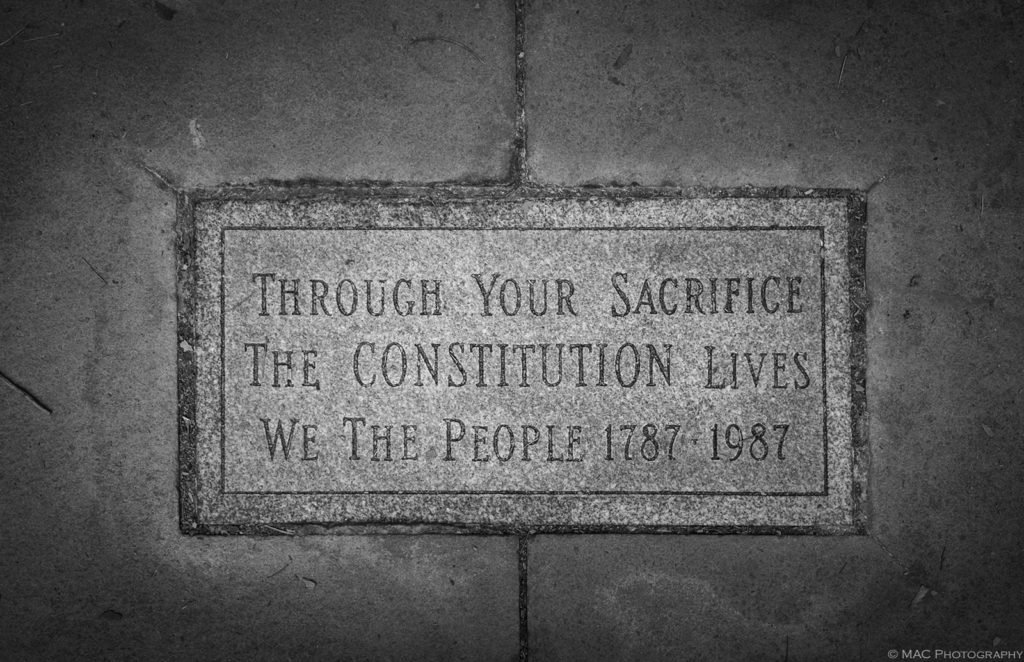 No visit to Philadelphia is complete without a visit to the B. Free Post Office at 316 Market Street. From Washington Square, exit on 6th Street and walk East to 4th Street. Make a left of 4th Street to Market Street. Make a right on Market Street the Post Office will be on your right a short walk down Market. “The B. Free Franklin Post Office & Museum is the only Colonial-themed post office operated by the United States Postal Service. It is the only active post office in the United States that does not fly the American flag (because there was not yet one in 1775 when Benjamin Franklin was appointed Postmaster General). The postmark “B. Free Franklin” is still used to cancel stamps.” 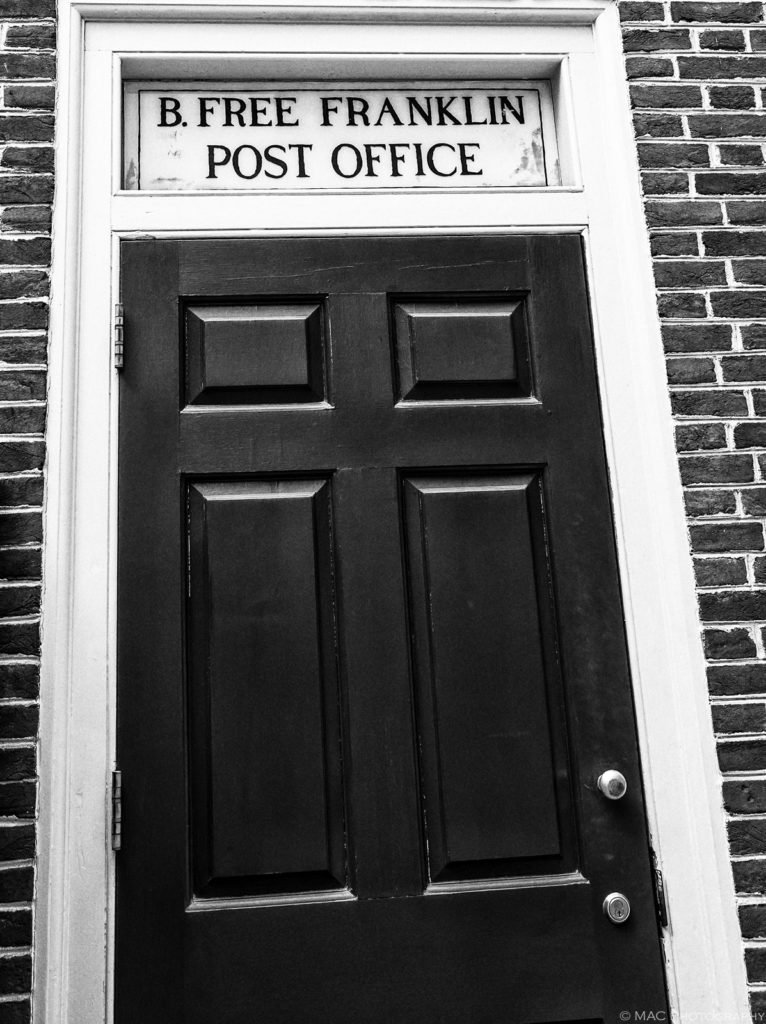 This article only provides a brief glimpse of Philadelphia and what it has to offer. There are many museums (both art and scientific) where you can easily spend a full day exploring each one. If you’re in New York or Washington, Philadelphia is a relatively short train ride away; do yourself a favor and hop on Amtrak for a visit to Philadelphia you won’t forget!

I was asked why I submitted this project with monochrome photos instead of color?  After reviewing the photos many times, I decided that the color rendition didn’t convey the mood I was hoping to impart.  Philadelphia is a city with grit! If you had spent any time in the various working class neighborhoods that segment the city and proudly extol their ethnicity, you would understand how each feels their contribution to the city makes it what it is today.

While the essay essentially focuses on Center City and the Historic district, I feel that the monochrome treatment best reflects that grit I feel everytime I’m in the city – in any neighborhood in the city. Additionally, the monochrome photos better highlight the contrast between the old and new within the city. 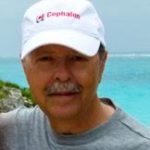