It can be a dangerous world out there for photographers. Whether we’re trying to find that perfect angle or capture the decisive moment, sometimes photography can be deadly. And not only for people who take crazy risks for their images, as we shall see later on.

But first, the paparazzi are one type of photographer that many people love to hate. Freelance photographer Chris Guerra was following Justin Bieber’s Ferrari when the sports car was pulled over by the police for speeding. As Chris approached, trying to take photos, the police told him to return to his own vehicle. After some persuasion, Chris did walk back to his car, when he was struck by an oncoming SUV and killed. Ironically, Justin Bieber was not driving his Ferrari at the time, so Chris wouldn’t even have nailed the shot before his untimely demise.

Then there’s the “Darwin Award” type photographers. People who photograph on operational train tracks could fit into this category, such as John DeReggi from Boyds, Maryland, USA. It seems that John, aged 16, was photographing a friend on the railway tracks for a school assignment when an Amtrak train struck and killed him. The friend saw the train and successfully dived one way, but John tried to go the other way, to no avail. Active train tracks are particularly risky places to shoot because oncoming trains are not easily heard until they are upon you. The train that killed John reportedly travelled at 110 mph (180 km/h) which would have left him almost no time to react. 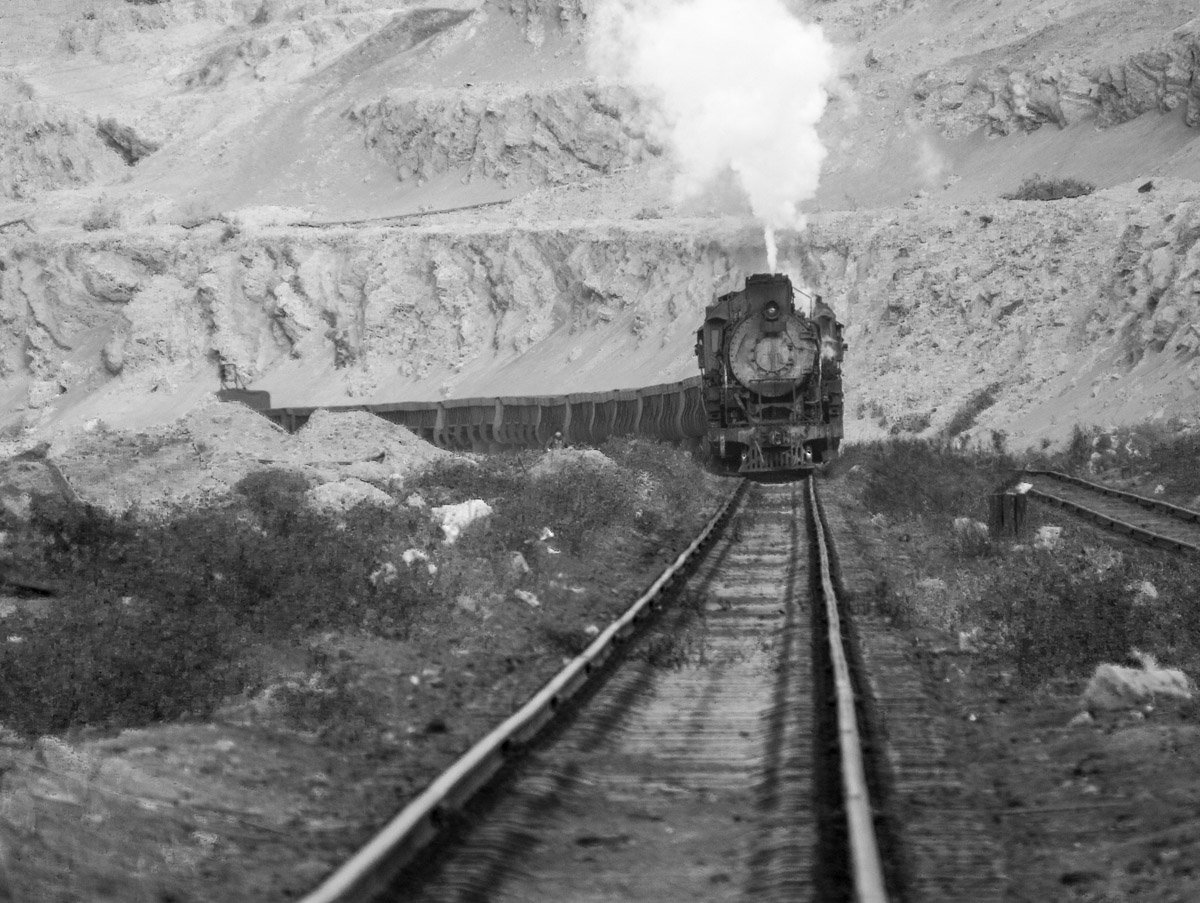 Dangerous? Crazy? This coal train was actually travelling in reverse, but taking this shot whilst standing on the railway tracks would still be considered too risky by some. Sandaoling Coal Mine, China

It isn’t just children who die being silly on railway tracks. Photographer Christopher O’Guinn, aged 25, was doing a model shoot between two sets of railway tracks in Fresno, California, USA, when trains arrived on both lines at once. The trains were travelling in opposite directions which would have given him little chance to avoid being killed. Except, of course, if he wasn’t at the railway tracks in the first place.

A special Darwin Award category could probably be made just for crazy selfies. Leornad Tonui and Michael Shikuku were reportedly in Kenya taking a selfie whilst standing next to and touching a wild elephant. Unsurprisingly, they received decisive retribution from the camera-shy elephant who squashed them, killing them both.

A Polish couple also tragically died trying to take a selfie after stepping over a safety barrier at the ocean cliffs in Cabo da Roca, Portugal. Climbing the barrier in front of their young children, the couple slipped and plunged to their deaths. I can’t imagine the trauma faced by their children, who had to be placed in temporary care before relatives could travel to Portugal to collect them. 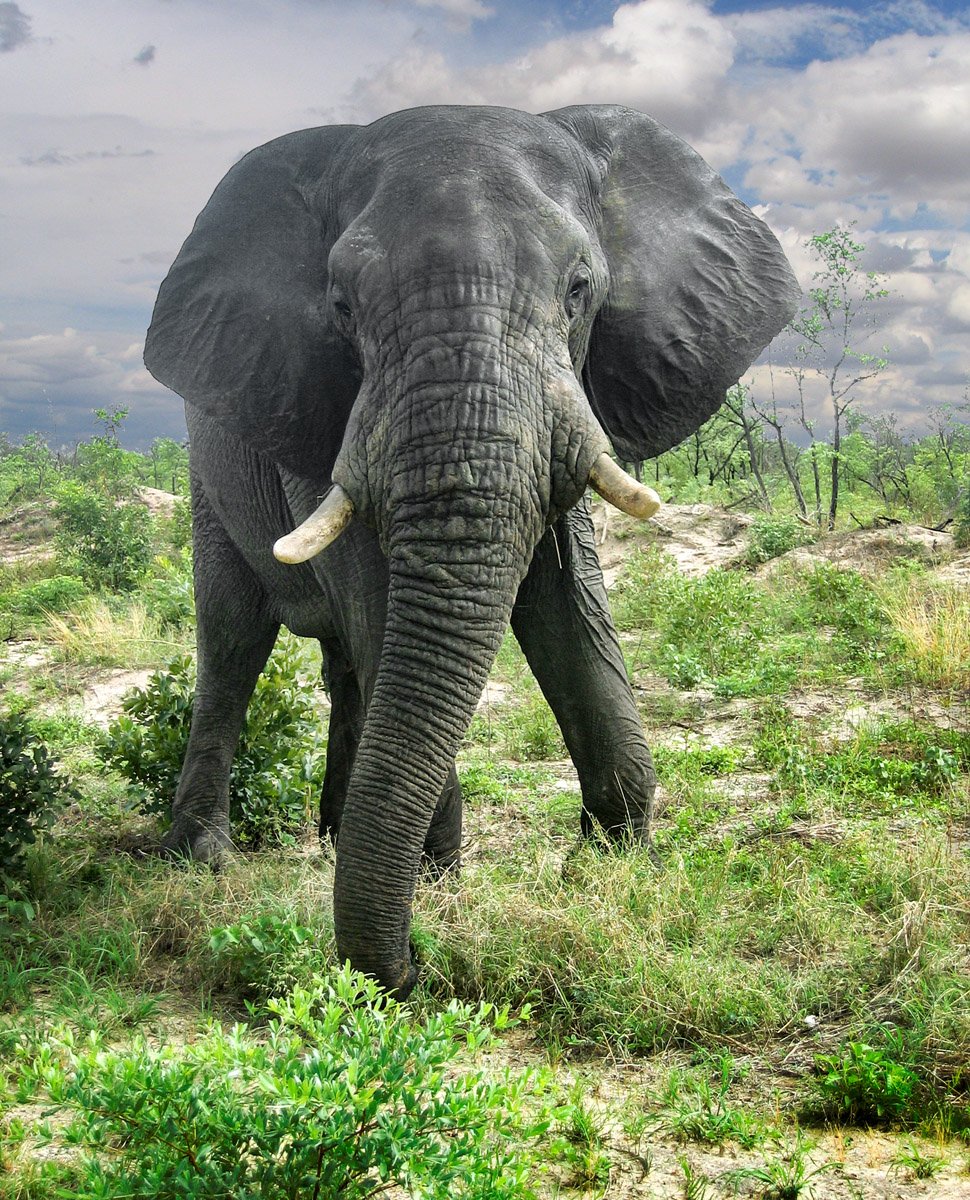 Wild elephants are beautiful, but standing next to one for a selfie is a guaranteed Darwin Award. This wild elephant was standing at the side of a highway, not within a national park, in Botswana, Africa.

We’ve all heard of photojournalists who have died in far off places. In January 2016, photographer Leila Alaoui was killed by a jihadi gunman in Burkina Faso, Africa, during a terrorist attack. Leila was sitting in a car outside a cafe when she was shot multiple times along with her local driver. Thirty victims ultimately died in the terrorist attack, which was targeted at a hotel very close to Leila’s car. Burkina Faso is one of the world’s poorest nations and has been subject to multiple coups in recent years, so Leila was possibly taking an above average risk by being there. Her death is still incredibly unfortunate and tragic.

Rooftop climbers are also well known photography risk takers, sometimes receiving instant capital punishment for the crime of trespassing on skyscrapers. Connor Cummings of New Jersey, USA is one example. Connor had successfully reached the top of New York’s 52 story Four Seasons Hotel and was photographing the scene below when he stepped back and fell through an opening in a catwalk ladder. Although he was approximately 680 feet (210 metres) above street level, he actually only fell 25 feet (7.5 metres) to a rooftop below. Unfortunately, this drop was still enough to kill him. 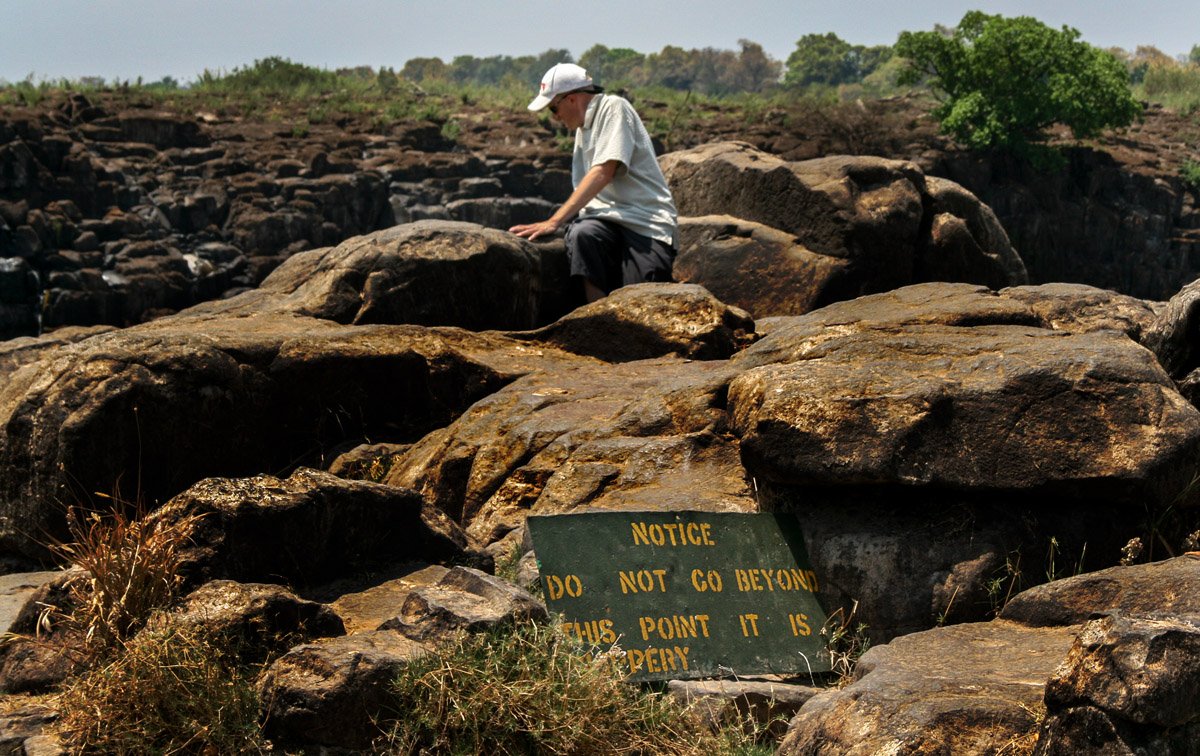 “Do not go beyond this point it is slippery”. Overlooking a 100 metre (330 feet) drop at Victoria Falls, Zimbabwe, sometimes the lure of a better view is too tempting.

Photographer Richard Green was killed in a helicopter crash along with his wife Carolyn and filmmaker John Davis as they attempted to fly over densely vegetated mountainous terrain near Sydney, Australia. Richard’s love of “helicamping” enabled him to fly to the most remote and inaccessible places to photograph creatures and scenes rarely seen by humans. Richard was reportedly known as a risk taker in his helicopter, and this time he paid the ultimate price for it.

It’s not just Darwin Award winners and photographers at insane locations who die in the pursuit of photography. Father-and-son duo Chris and Brendan Powell, in Brisbane Australia, were making aerial photos from a large cherry picker when it toppled over and crashed onto a nearby street. The cherry picker was up to 40 metres (120 feet) tall and its collapse killed Chris and injured his 17 year old son. Reportedly “vigilant about safety and blameless for the accident”, Chris Powell’s death serves as a reminder that all aerial photography requires extra precautions, even if you’re not flying. 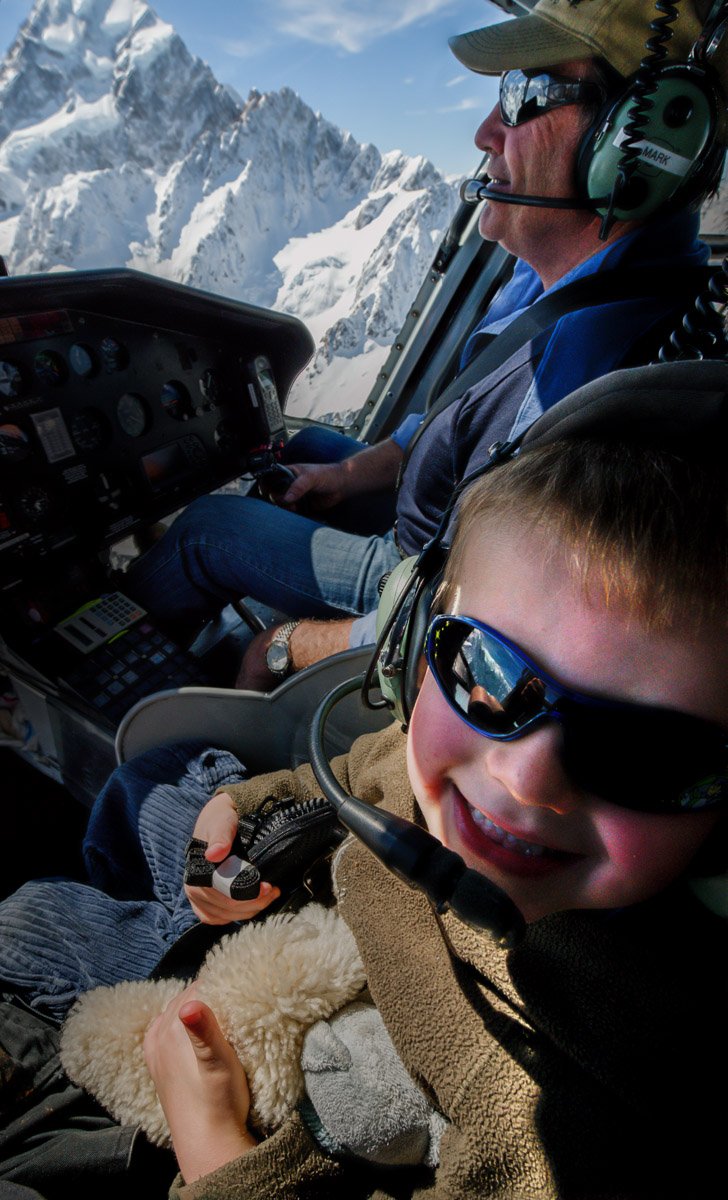 Every now and again, a helicopter crashes. Too much risk? Not this time, thankfully. Mt Cook, New Zealand.

Other experienced photographers have also taken things one step too far at their peril. John McCourt from the Antrim Camera Club, Northern Ireland, died trying to photograph stormy weather in Co Donegal, UK. John slipped off a cliff into a wave-battered ravine, an experience local coastguards described as “would have been like a washing machine”. Sometimes the best landscape images are made in the most dramatic weather, but this photographer’s misjudgment of the conditions cost him his life. 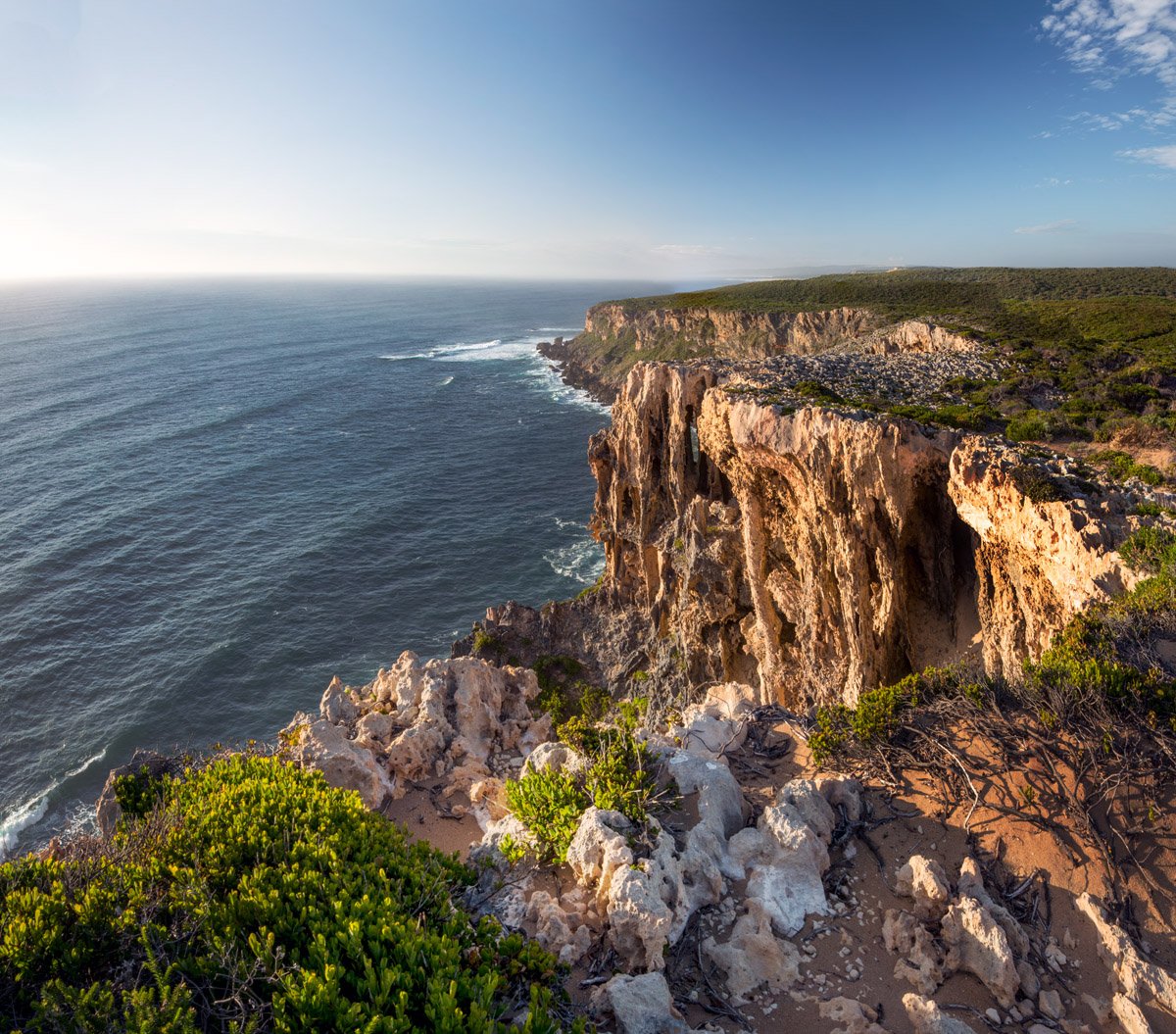 The limestone cliff edge is very unstable and the ground is slippery, but the shapes and colours of this location are appealing at sunset. How much closer to the edge could we safely go? Windy Harbour, Western Australia

Every photographer so far was either doing something extraordinary or especially risky. Not so for Sarah Frazer, a photographer who had journeyed alone photographing third world countries, before heading home to her quiet Australian country town. Her car broke down relatively close to home, so she wisely pulled off to the side of the road, when she was struck by a truck. The truck driver was not alcohol or drug affected and had not been speeding. It appears he was simply momentarily distracted when his truck hit and killed Sarah. Sarah’s dad reportedly quoted her as having said “I’ve looked after myself travelling in Third World countries, you don’t need to worry about me, I’m only just going to Wagga”. How sad and unlucky that this proved not to be the case. 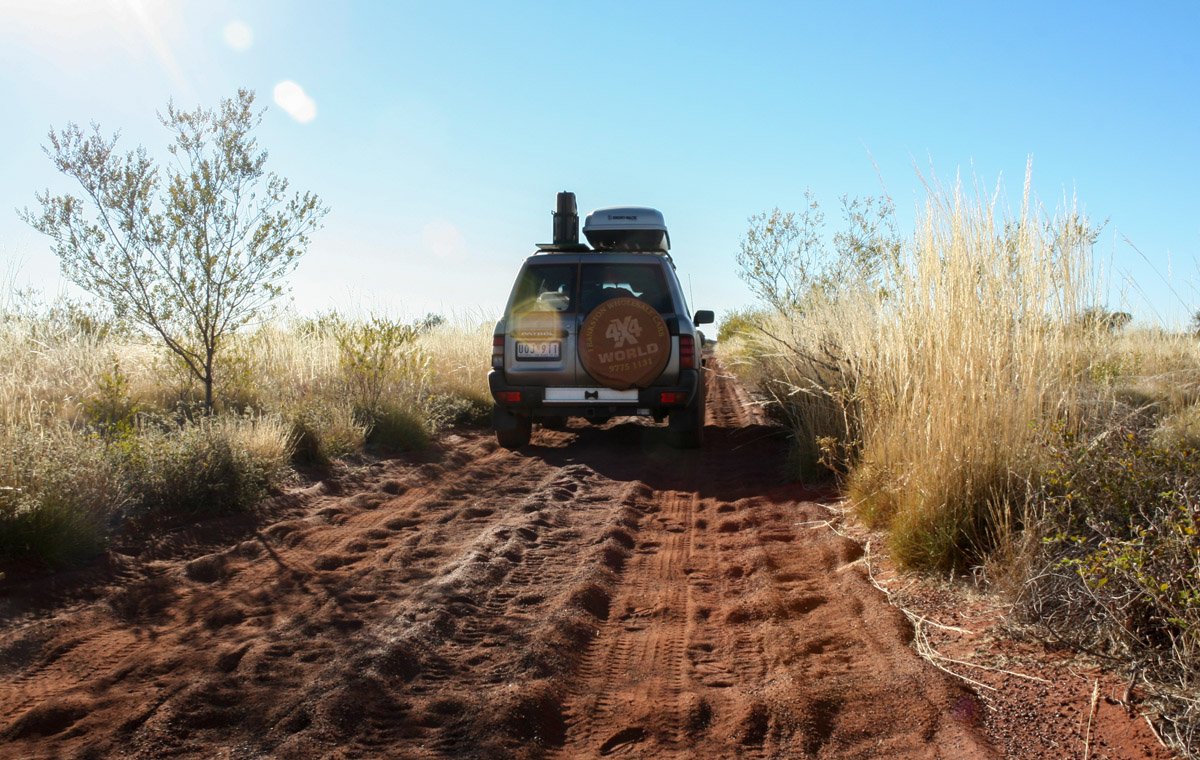 What is the risk of driving a car to and from your photo shoot, compared to the other risks? Gunbarrel Highway, Western Australia

Photographer and TV cameraman Adam Ward, and journalist Alison Parker, were famously killed by a lone gunman whilst filming a live TV interview in Virginia, USA. The gunman was disgruntled after having been fired from the television station almost a year earlier, and he also had a history of interpersonal issues with colleagues. It seems that Adam was primarily a victim of simply working in the wrong job at the wrong place during the wrong time.

Finally, someone who didn’t die but got very close. Photographer Ian Parr of Esperance, Western Australia was standing on some rocks at his local beach, photographing the ocean, when a freak wave dragged him out to sea. Thankfully, after swimming to the point of exhaustion for nearly an hour, people came to the shore and heard Ian’s cries for help. Ian was rescued and revived, and lived to tell the tale. A lucky escape! 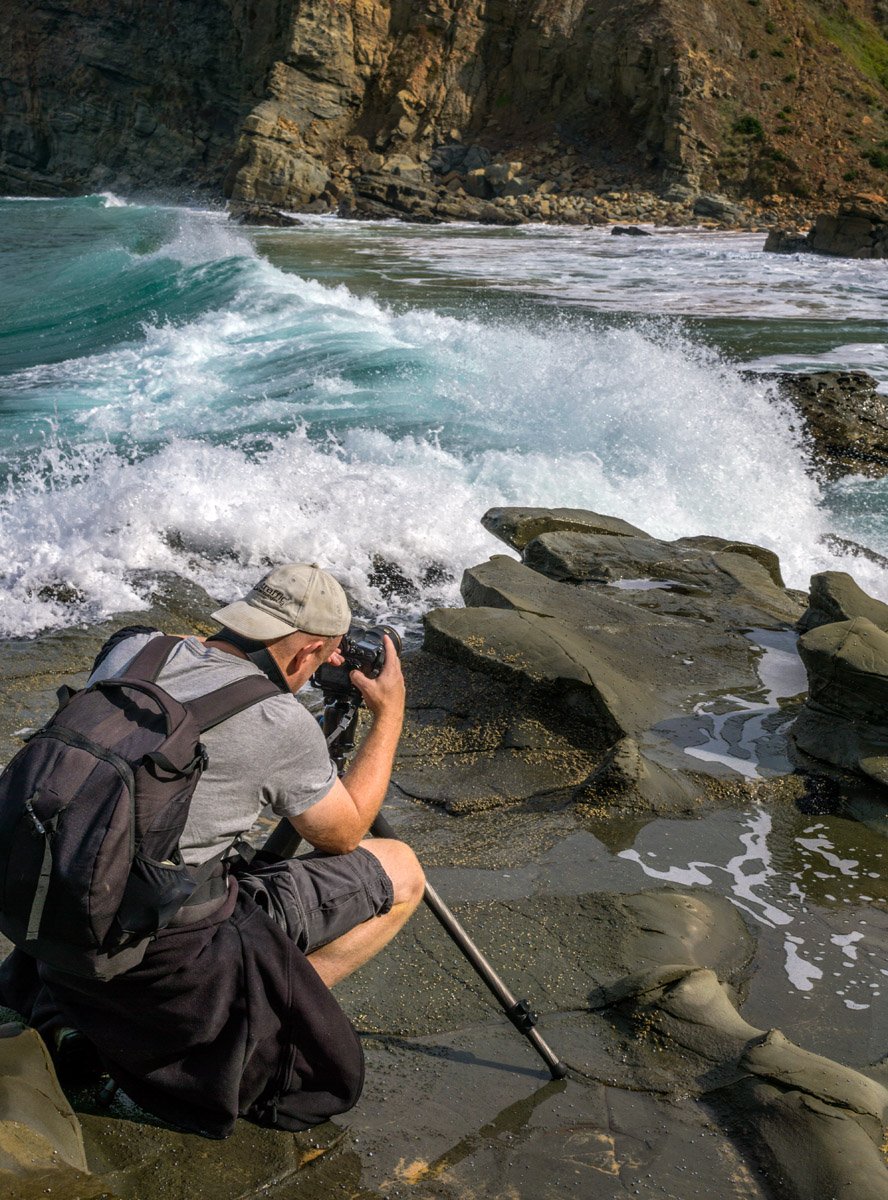 There is the risk of being swept away by a freak wave whilst shooting at the ocean. Phillip Island, Victoria, Australia. Photo of the author courtesy David Wilkinson.

So what can we learn from all this? We already know that a worthwhile life involves risk, and the best photographs are taken because they portray something special, different or risky. To make the best of a scene, thousands of photographers have successfully flown in a helicopter, climbed past a fence or barrier, stepped off the marked path, or weathered a storm. Many photographers have captured an image whilst briefly standing just a little too close to busy traffic and some of us have even pressed the shutter button whilst uncomfortably close to a moving train. Many photographers have also photographed beside the ocean, always being susceptible to being swept out to sea by a freak wave. Most of us have worked with a prickly colleague. And we have all travelled by car, one of the activities in life that is possibly most likely to kill us.

But neither you nor I have died doing it….yet. So what level of risk do you think is acceptable to make the best pictures you can? It is worth considering this carefully, to hopefully avoid your friends and family reading your name in an article like this. 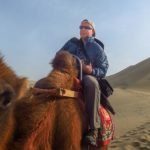 Simon Patterson is an enthusiastic photographer who also likes discovering the truth about things. He loves hiking and camping in the wilderness and the challenge of learning to communicate through the art of photography. Simon aims to create images that affect people emotionally. When not out shooting or processing images, he reads everything he can about photography. Simon resides in country Victoria, Australia.