When people think of landscape photography, what most have in mind is a pristine wilderness, completely devoid of any human presence. In this day and age, however, landscape that is untouched and not shaped by the human hand has become very hard to find and many popular and beautiful locations are often overrun by hordes of tourists.

While landscapes with no people in them are often sought (and I even created a tutorial on how to remove crowds from a photograph) sometimes a human presence can enhance what would be a rather ordinary scene instead.

The photo below, for example, is just a nice but not particularly spectacular shot of the shores of Pemaquid Point, Maine. If you look closely, however, you will notice a woman sitting on the rocks, looking towards the open sea. 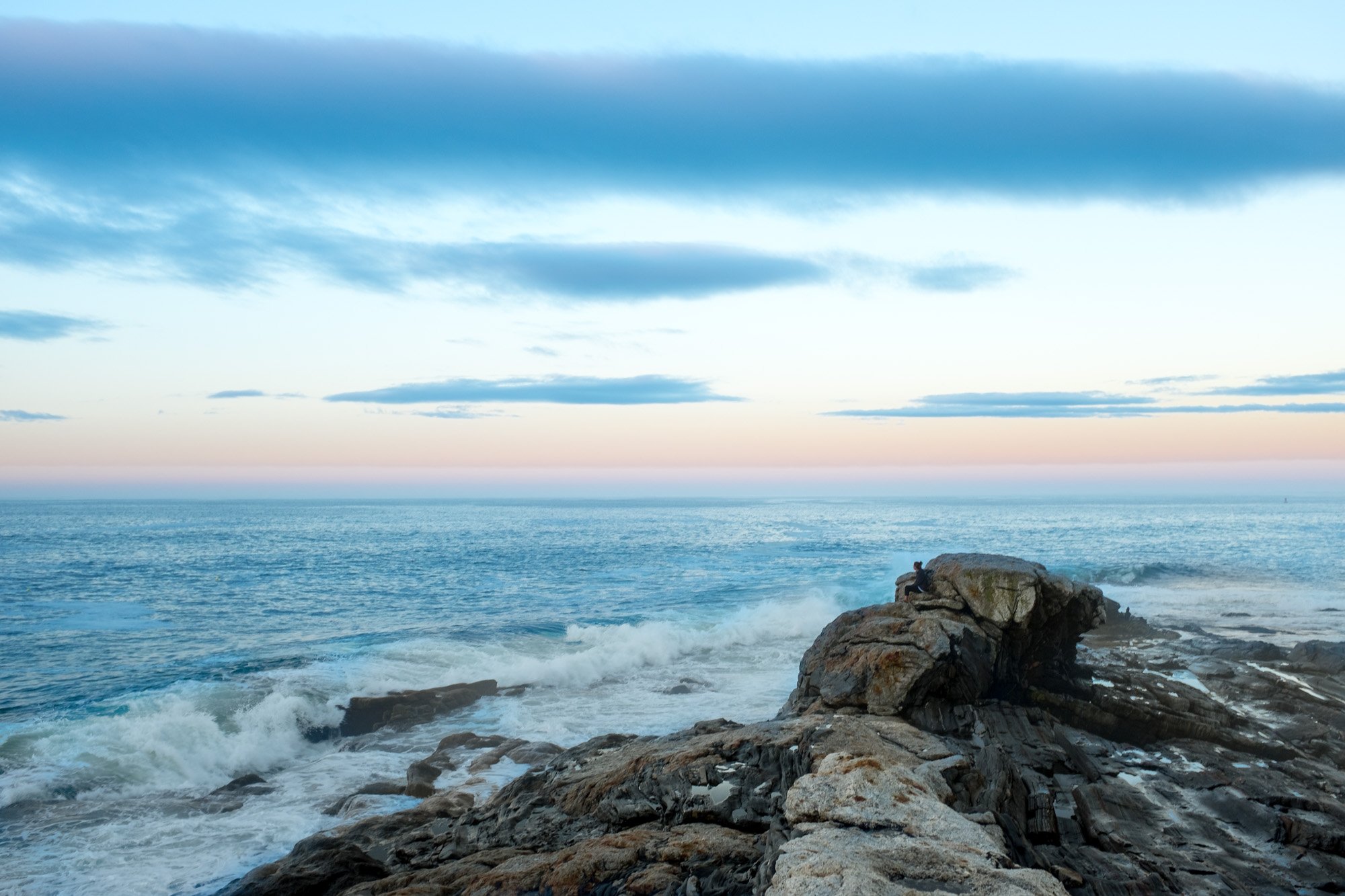 The presence of that lone person, to me, provides a focal point that would otherwise be missing and naturally poses questions that infuse the image with more meaning: Is she contemplating the vastness of the ocean? Longing to cross that distance? Remembering someone who left long ago? Or is she simply bored while her photographer boyfriend is busy taking pictures around the place?

I have to admit the latter option is very likely, from what I remember, but let’s not be too prosaic and mundane.

In this case I think the presence of a living human being adds to the landscape and doesn’t make us want to clone-stamp it away in Photoshop. This is not always the case, of course, so it behooves us to ask ourselves in what situations people in the frame make a photograph more interesting.

Before we are able to answer that question for a specific image, we should ask ourselves these other ones:

To Clone Or Not To Clone

Photoshop is a fantastic tool and it enables us to do things that until a few years ago we could only dream of, like cleanly and easily remove distracting elements from a photograph, using just a few clicks of the mouse.

When confronted with a photograph of a landscape that contains some people in it, the temptation to use the healing brush or the content-aware fill tools is strong. However, we should always ask ourselves whether the human presence adds or subtracts from the composition. The choice is not always obvious and a lot depends on what is our intent with the image. What kind of feeling or atmosphere do we want to convey to the viewer?

Of course, the sensations a viewer feels when watching one of our images depend a lot on the viewers themselves and we can’t always control them. At least in my case, but I think this is true for many, I am almost never conscious of what precise emotions I am putting in my pictures. I suspect that whoever sees my photos is able to perceive my own emotions better than myself. I also do not believe fine art photography should be didascalic and intentionally transmit a precise message. But I digress.

By way of example, here is a photograph I took a few years ago at the Pura Batu Bolong temple in Bali, a truly magical place where lots of people gather to admire the sunset. 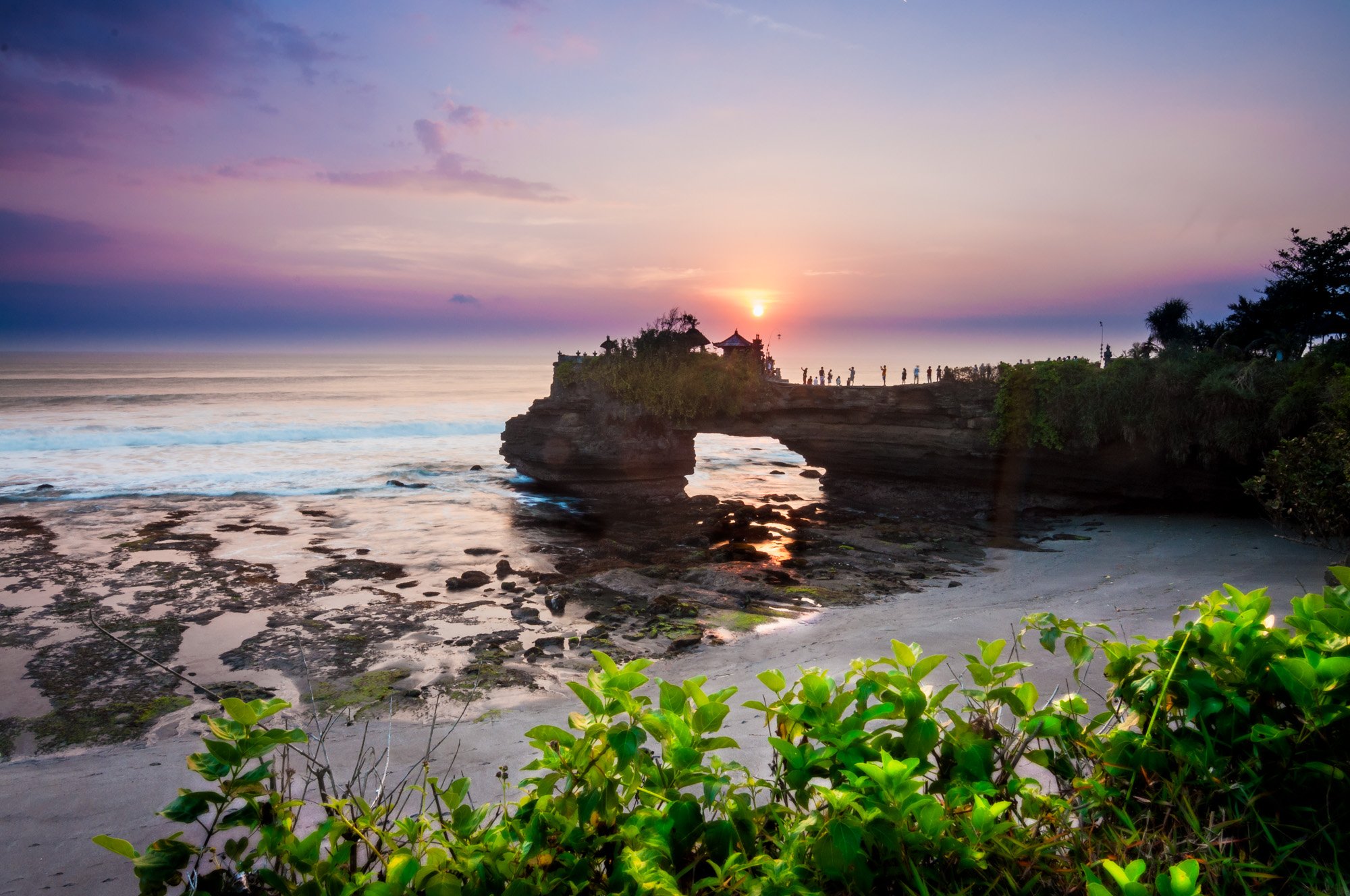 Here below is a previous version of the same image. Aside from some tonal adjustments, if you look closely (click on the image to enlarge them) you will notice I removed three people from the beach. Two of them were wearing white t-shirts and I judged those bright spots to be way too distracting. 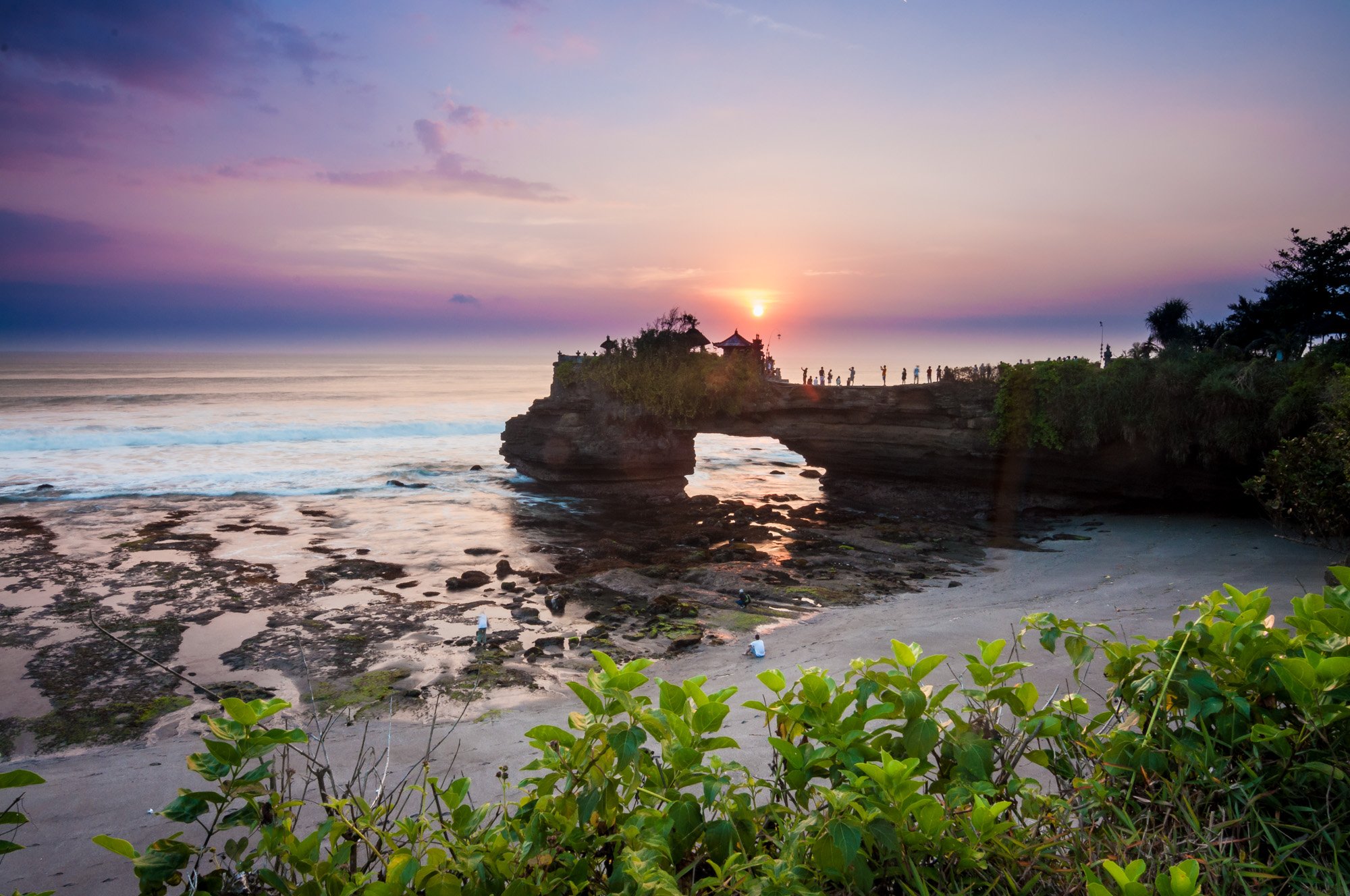 At the same time, I decided to leave alone the people standing on the stone bridge that connects the temple to the mainland, who were waiting for sunset. In a way, I think they help establishing the atmosphere of festiveness of the moment, but it could be argued that the photograph would be better if I removed them, which would be fairly easy.

There is no question, in my mind, that the people on the beach must be removed, however.

Here is another example where the choice to clone or not to clone people is not so obvious (click to enlarge).

While it could be argued that the two human figures in the middle one provide a sense of scale and appear as climbers who have just reached a summit (which, thanks to the perspective distortion afforded by the wide angle lens used here, looks much taller than it is in reality), in the end I decided to print the third version, which depicts a pristine (one could even say Jurassic) natural scenario.

Again, it’s all a matter of intent and we, as photographers, must always reflect on what is the intent of our images. If we don’t, we might as well be shooting casual snapshots.

A Matter Of Relationship

To conclude this article, I want to share some of my opinions on the main factor to consider when deciding whether to opt for a photo devoid of any human presence or, conversely, whether to leave the people in.

The concept of relationship can be broken down in two separate, but related (excuse the pun) aspects:

The first kind of relationship exists when the people in the picture have a reason to be there and are therefore related in some way to their environment. The picture below might serve to illustrate this.

I took this picture while sailing across the Aegean Sea. We were passing by the island of Nisyros while the sun was setting right behind it. I could have easily zoomed in (and in fact I did) but I also took a few shots with a wider angle, including some passengers at the edge of the frame. While the guy standing there is probably just admiring the sunset, I like to think of him as somebody who left his home on the island long ago and is now returning to it.

Maybe I’m just imagining things, but to me, his is a longing gaze. Photography succeeds when it elicits emotions in the viewer and if I have succeeded in conveying the same emotions I was experiencing at the time, then I feel I have succeeded. The version with just the island is nothing more than a nice sunset picture.

In the photo below, there is no meaningful relationship between the people and the environment. They just happen to be walking along a walkway in the Plitvice Lakes National Park in Croatia, simply because there is no other place they could be walking. There is no emotional connection visible between them and the beautiful nature they are immersed in, so their presence conveys no emotion other than a mild annoyance at seeing how crowded that place can be.

Coming now to compositional relationships, here is another example.

The two people sitting at the bottom of the picture break the symmetry of the composition. When I look at it, I start from the top, follow the sun beams down towards the center, I linger on the cross, then descend down the column and end up looking at the human figures, where my eyes can rest. The human presence provides a sort of closure to the examination of the photo.

Notice also how the dark pavement below acts as a blocker, preventing the viewer’s gaze from dropping out of the bottom of the image.

If you are always undecided about whether to include people in your landscape photographs, I hope my article has given you some meaningful criteria and, if you want to receive more tips like these, right in your inbox, consider becoming a member of my photography community. You can use the form below for this.