This is a photo I took during my last visit to Venice. I had taken the vaporetto to the island of San Giorgio Maggiore, in the Venetian Lagoon, hoping to get a few great sunset photos. Actually the day had been for the most part gloomy, but the forecast said there would be openings in the cloud cover, so I went there, hoping for the best. 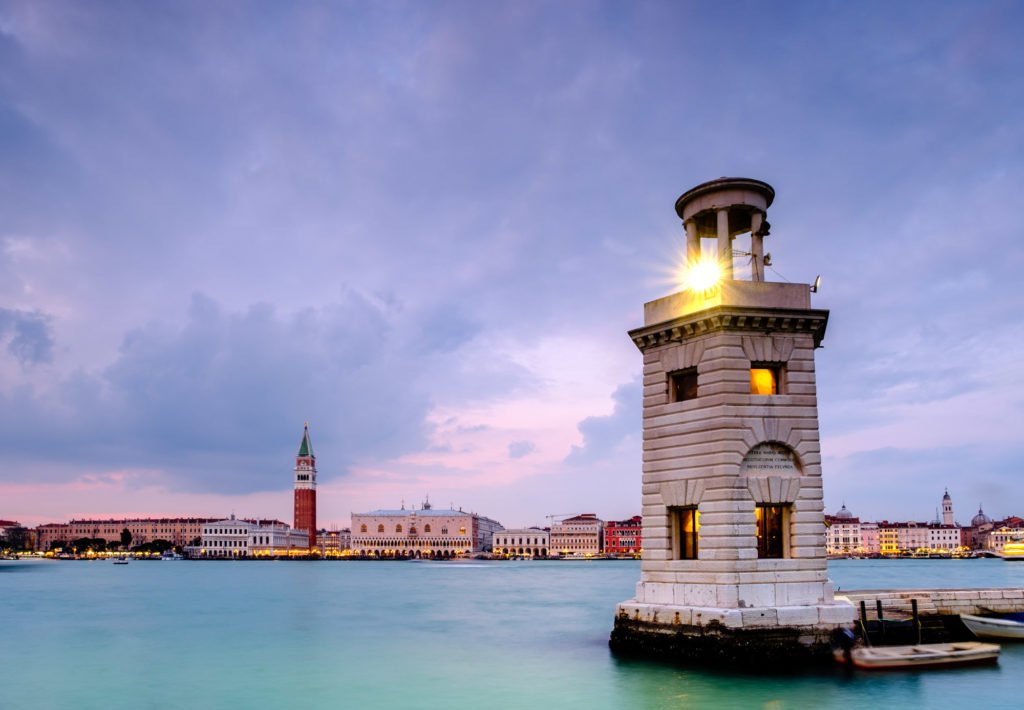 While the sky did open up a bit, there were still dark rain clouds to the west. I was hoping for the sun eventually to peek beneath them, as it was about to set. When this happened, the cloud cover was still too thick, so the sunset was limited to a thin band of orange on the horizon. This light was enough to throw some pink it the sky, but not much.

Disappointed with the sunset, I decided to turn my camera towards the north and the city of Venice. I knew that the lights of the city would eventually be turned on and hoped that there would still be some color in the sky, at that hour.

I also noticed the tower or lighthouse that stands at the entrance of the small harbor on the island and hoped that the lights on it would turn on as well.

As luck would have it, everything I was expecting conjured to happen at the right moment, allowing me to take the photo you see above.

If you’d like to know how I shot this image, what equipment and settings I used, why I settled for this specific composition, and how I processed it, starting from the out-of-camera version, you can join my free webinar, The Making of ‘Rainclouds Over Venice’ – From idea to final image, on March 28 at 6PM CEST / 12PM Eastern / 9 AM Pacific.

I will let you peek behind the curtain of my thought processes and of my digital darkroom. I am sure this will be informational and entertaining as well. Hope to see you there!