I was recently in Chicago for the Out Of Chicago Summer Photography Conference, an amazing event, now in its fourth year, that I had the honor to present at for the first time. It was such a blast that involved meeting old and new friends and walking around the city.

Since I had decided to dedicate most of my time to networking, I didn’t get to see as much of Chicago as I could have done, but what saw made me realize the city is certainly rich in photographic opportunities, so I will certainly be back next year, possibly for more days.

I shot a bit of everything, starting with my favorite kind of urban photography: blue hour cityscapes. Here is Buckingham Fountain and the Chicago skyline in the background. This is a stitched panorama comprised of 10 vertical shots and the resulting image is much wider, but I cropped it to a 16:9 format, as it looks better on the web page.

Buckingham Fountain and Chicago skyline at the blue hour

I also found some time to fly my DJI Mavic Pro high above Grant Park and capture another panorama of the skyline, this time at sunrise.

Chicago skyline from the air

Here’s another aerial photo, this time a single shot of Shedd Aquarium. 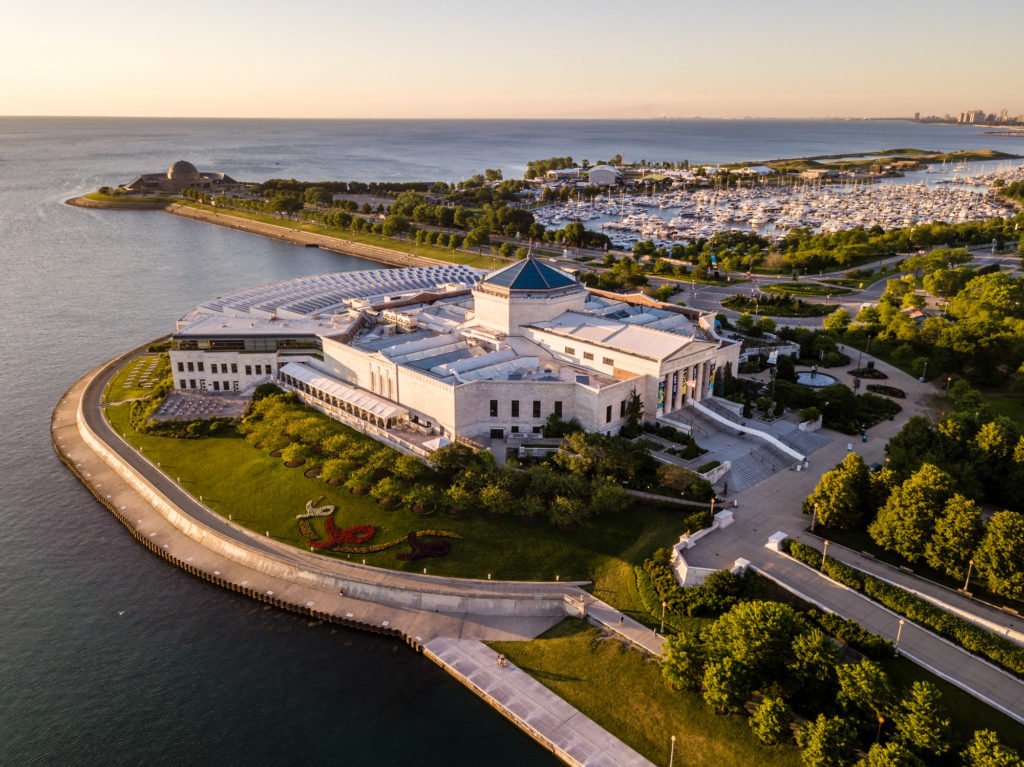 Speaking of friends, it was great to reconnect with Valérie Jardin. I put on my street photographer hat and switched my camera to black-and-white mode to go and shoot with her for a few minutes. This is looking down from one of the ‘L’ train’s platforms and playing with the shadows of the pedestrians in the late afternoon. The light was just perfect for this kind of photography. 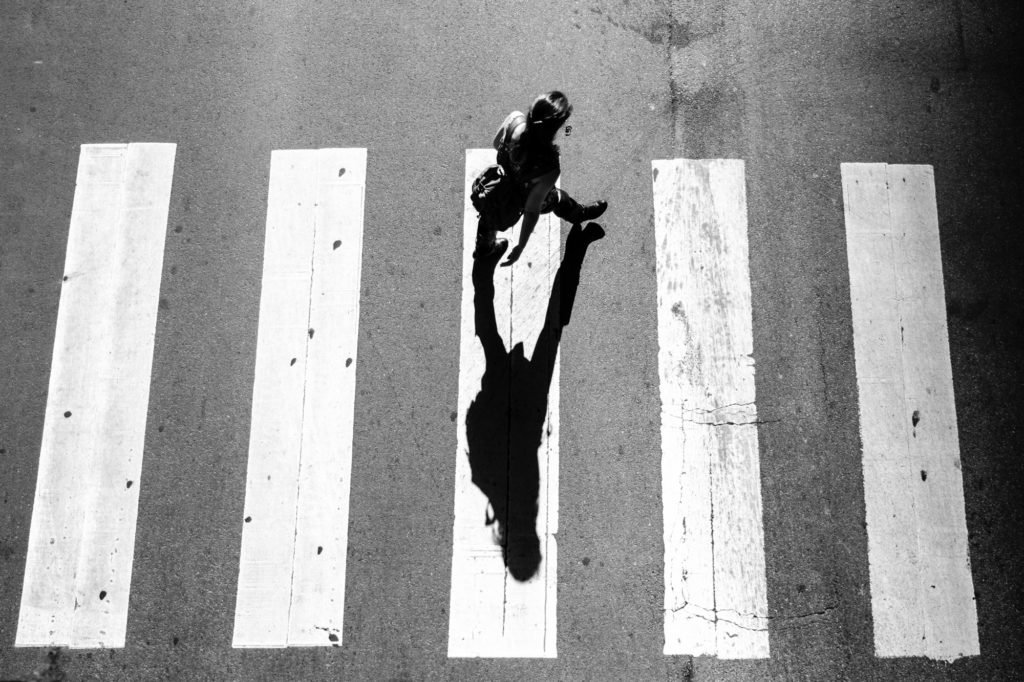 A view from the ‘L’ platform

This is the ‘L’ train, seen from below this time. 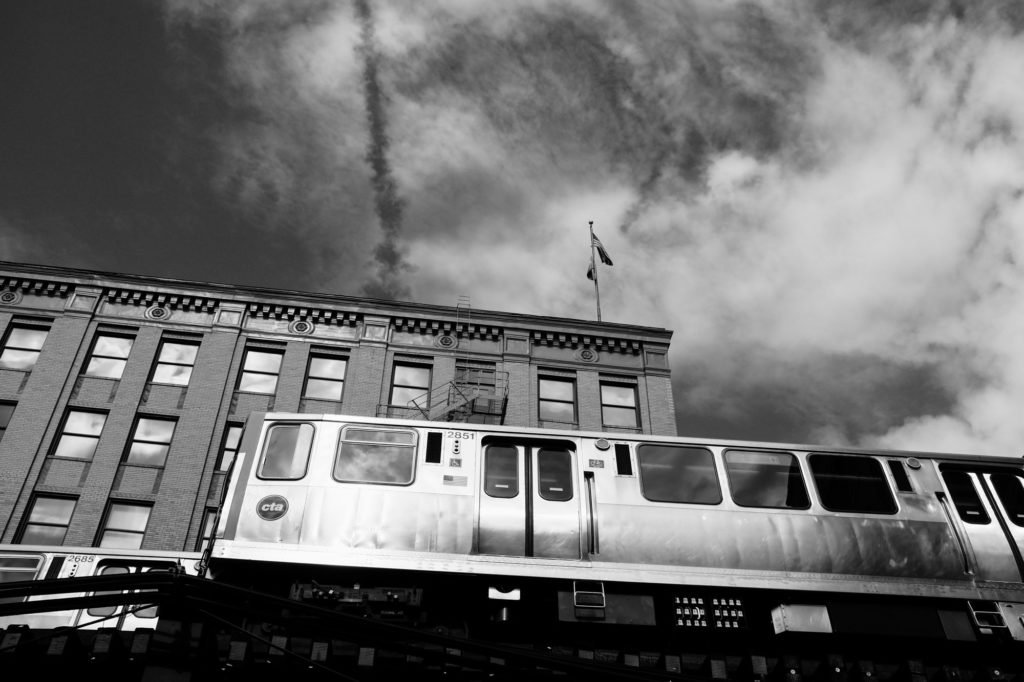 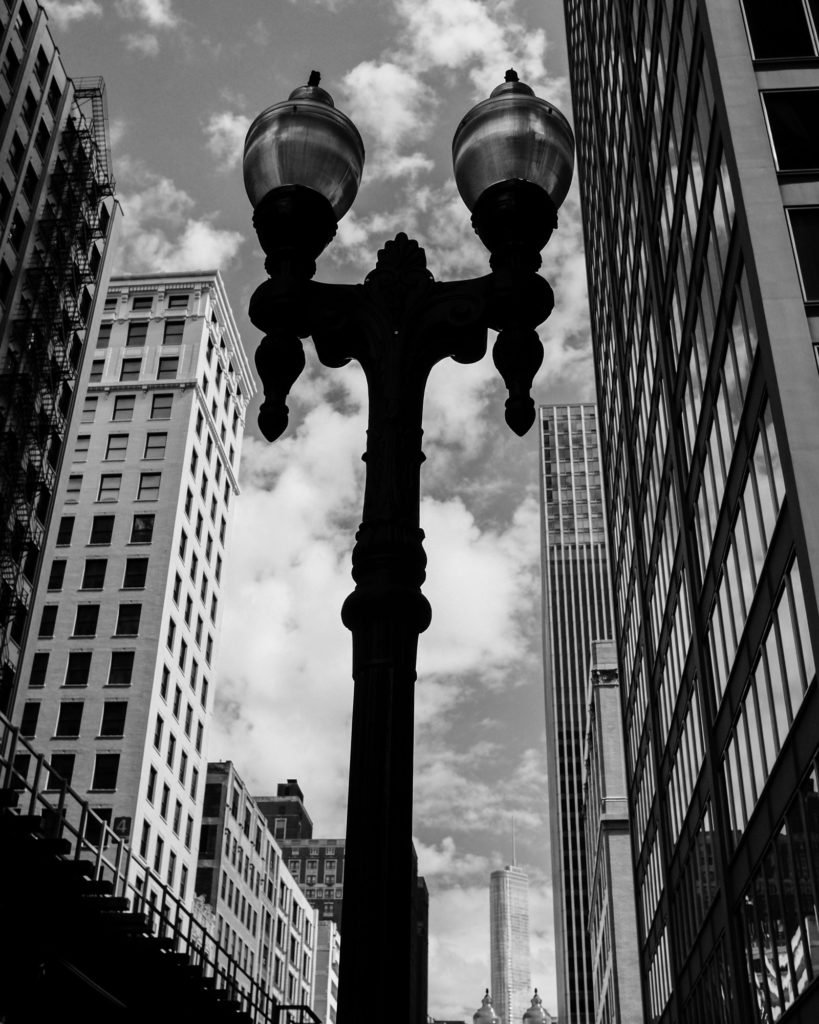 They say Vivian Maier used to buy her rolls of film here. The store probably has the same sign it had back then. 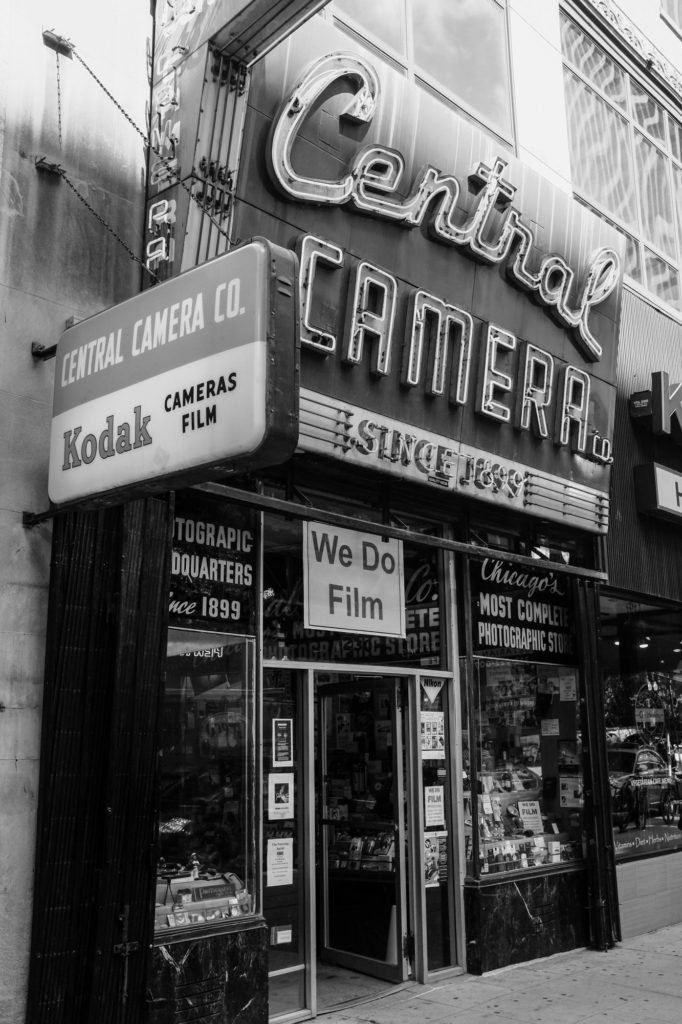 I also led a photowalk that was all about photographing strangers in the street, having asked their permission. To warm myself up, I got a few portraits on my own before the photowalk, like this one of two interesting guys. Curiously, it was the one on the left who approached me first, asking me if I was Jewish. If you are scared about asking someone to pose for you, in a big city pretty soon somebody will make contact first, and then it’s the time to ask for a photo. They have already broken the ice. 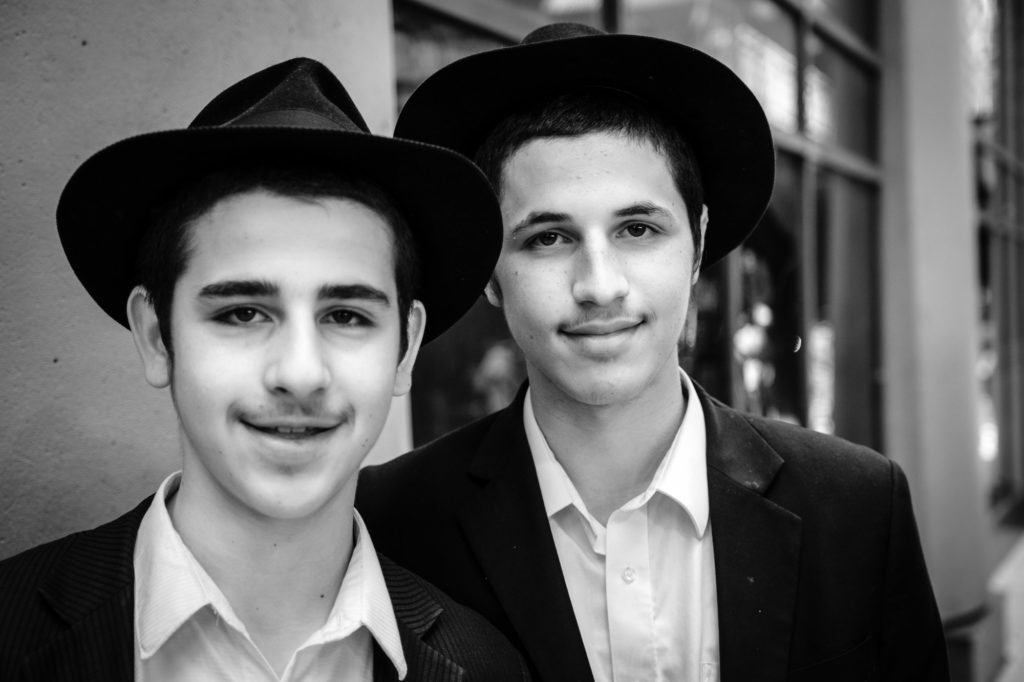 Here’s a portrait of a very nice lady we met during the photowalk. 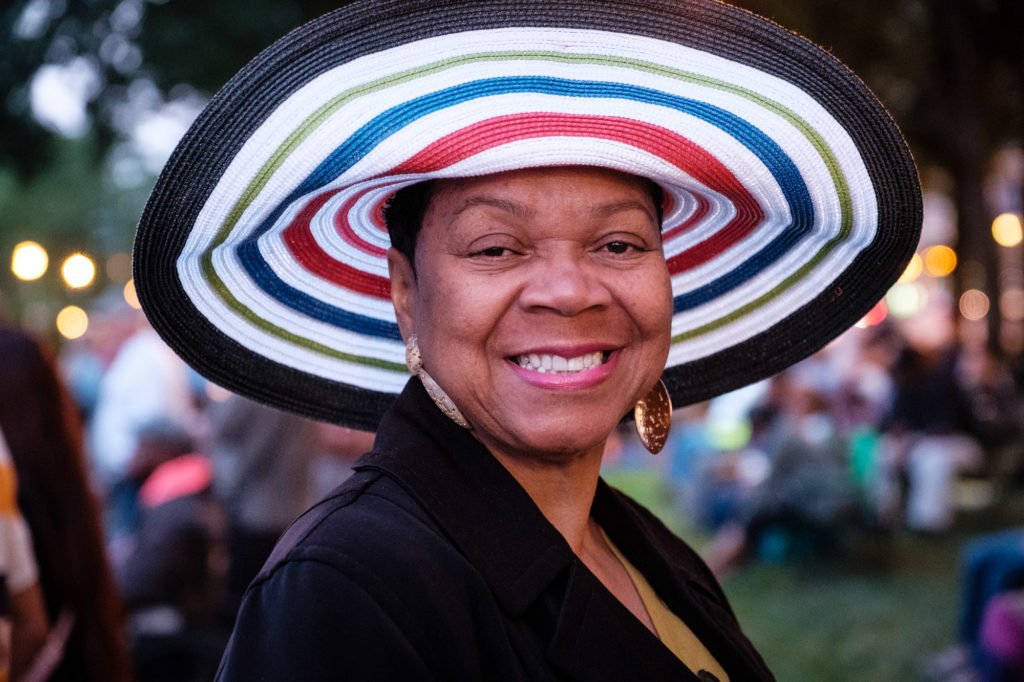 Smiling lady in a hat, Chicago

A cool biker and clearly a Cubs fan. 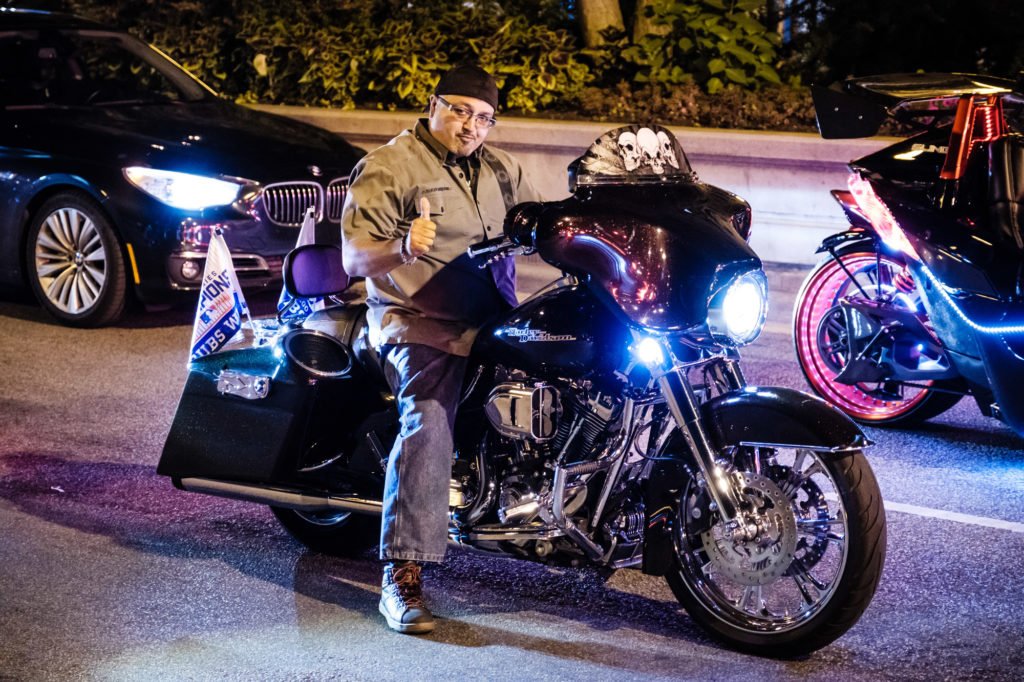 Steve Simon, who I had only talked to on the phone in the past, revealed himself to be a true gentleman, a super nice guy, and a passionate photographer, of course. Here he is, explaining some concept to his students. We might have some stuff coming up soon that will involve both of us. Stay tuned! 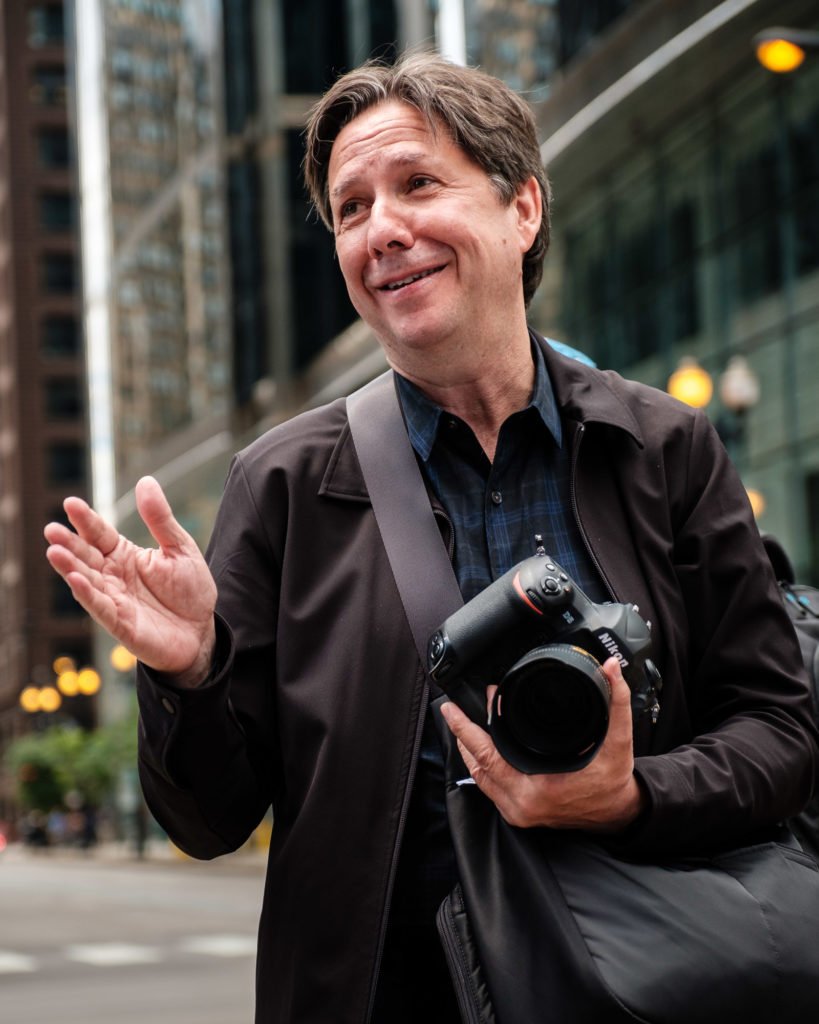 I also had the opportunity to stand in front of the camera for once. Here I am posing for Vanelli, who made me look really badass and athletic. Good job, paisà! 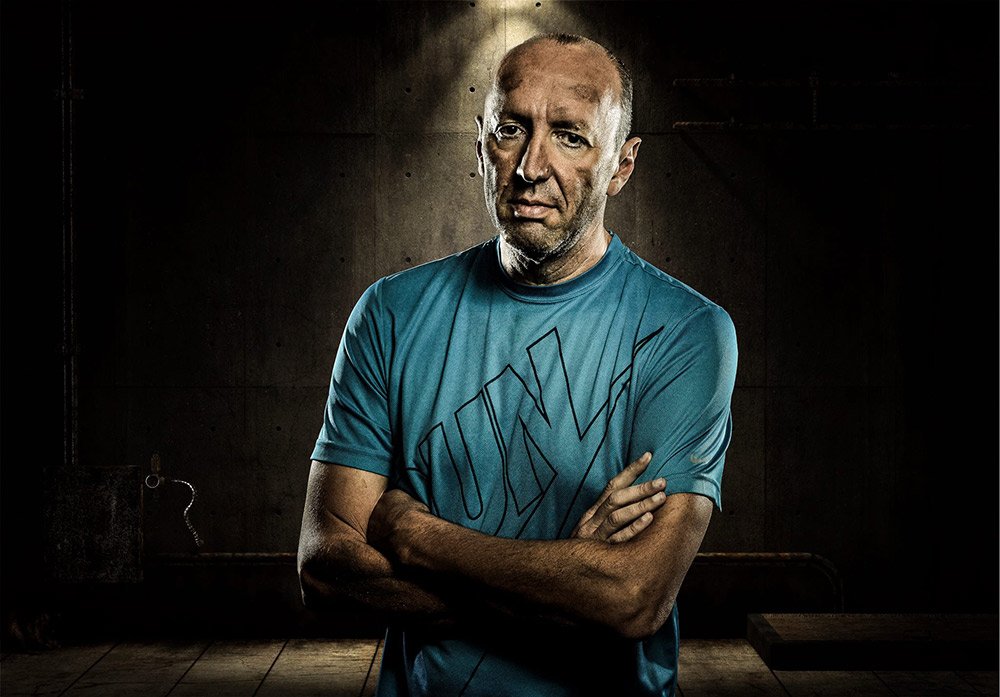 Myself by Robert Vanelli

I’m already looking forward to Out Of Chicago Summer 2018. This is an event that can’t be missed.