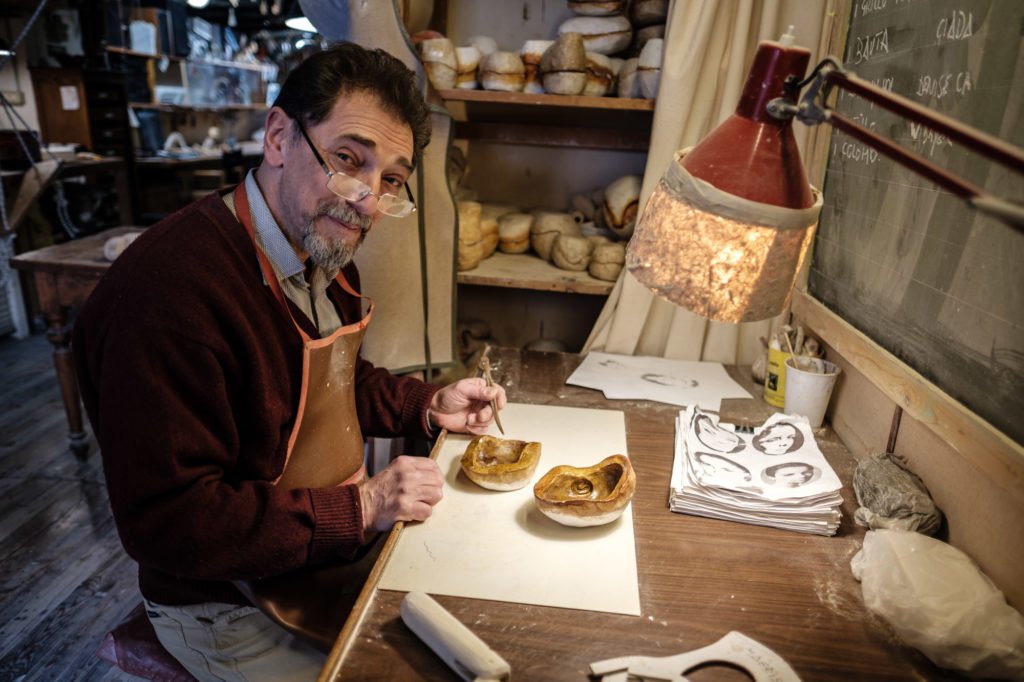 “Geppetto” at his work desk

Like a modern Geppetto, Roberto Comin slowly and carefully chips away at blocks of pinewood to make unique creations in his workshop in Venice. Without a shop window and betrayed only by a discreet sticker affixed to an anonymous iron gate, L’isola di Pinocchio is not easy to find.

I didn’t know about its existence until a good friend of mine asked if I might be interested in photographing it, together with the students of my Venice Carnival photography workshop. he wasn’t really sure that Roberto would allow a bunch of photographers to storm his laboratory and take photos of his puppets, but a phone call reassured him that my students were well behaved and an appointment was promptly arranged. 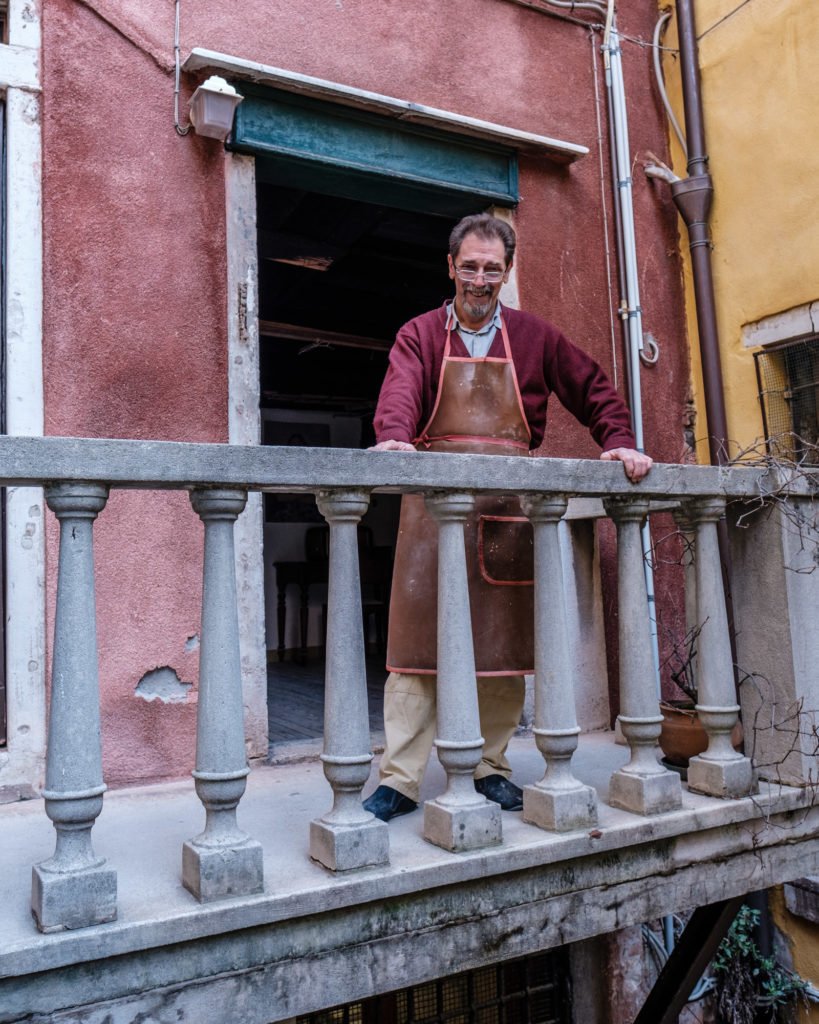 Roberto in front of his workshop’s door

At the agreed upon time, we rang on his door and Roberto welcomed us with a gentle smile. He proved to be much more accepting of our invasion than we had feared and very open to talking about his art and to be photographed.

He showed us how he carves wood to make trunks, arms, legs, and feet that he then binds together with elastic ribbons and nails to create little bodies that move realistically when the puppet master pulls on their strings.

The heads are cast from the sawdust that results from the carving process, made into a pulp with the addition of glue and vaseline, then hand painted and covered with wax for lustre and protection. His sister, a professional costume designer, tailors the sometimes very elaborate and rich clothes that the puppets wear. 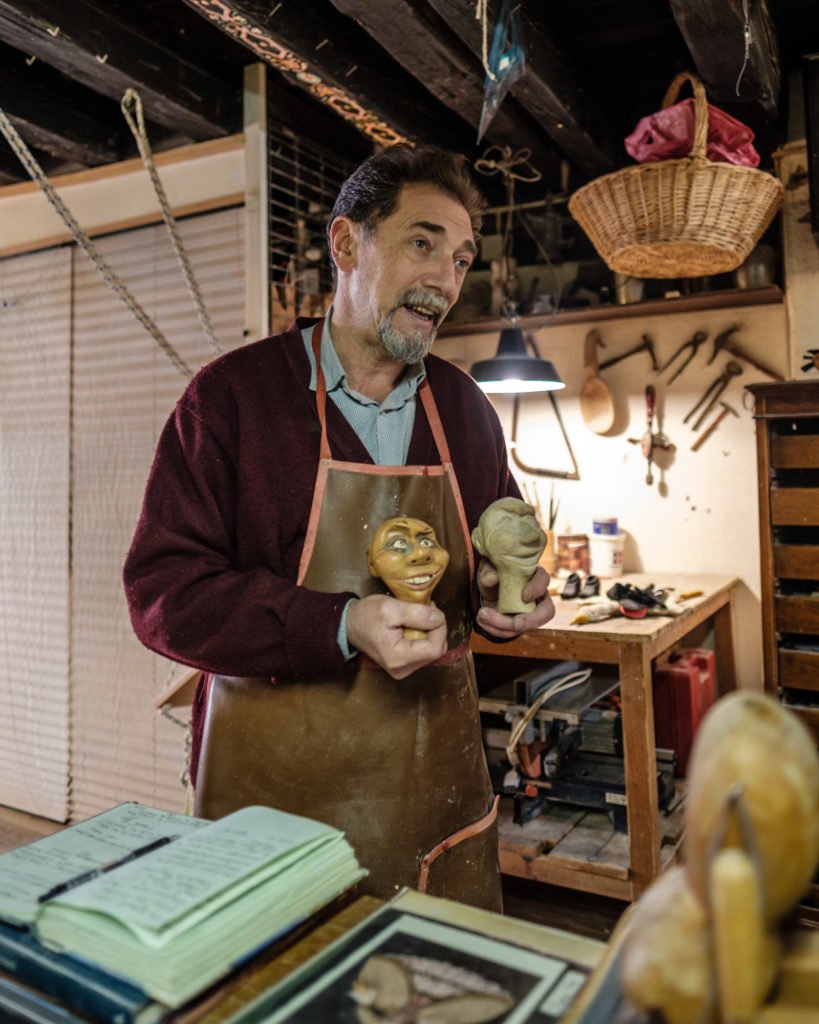 Roberto showing a finished and an unfinished puppet head 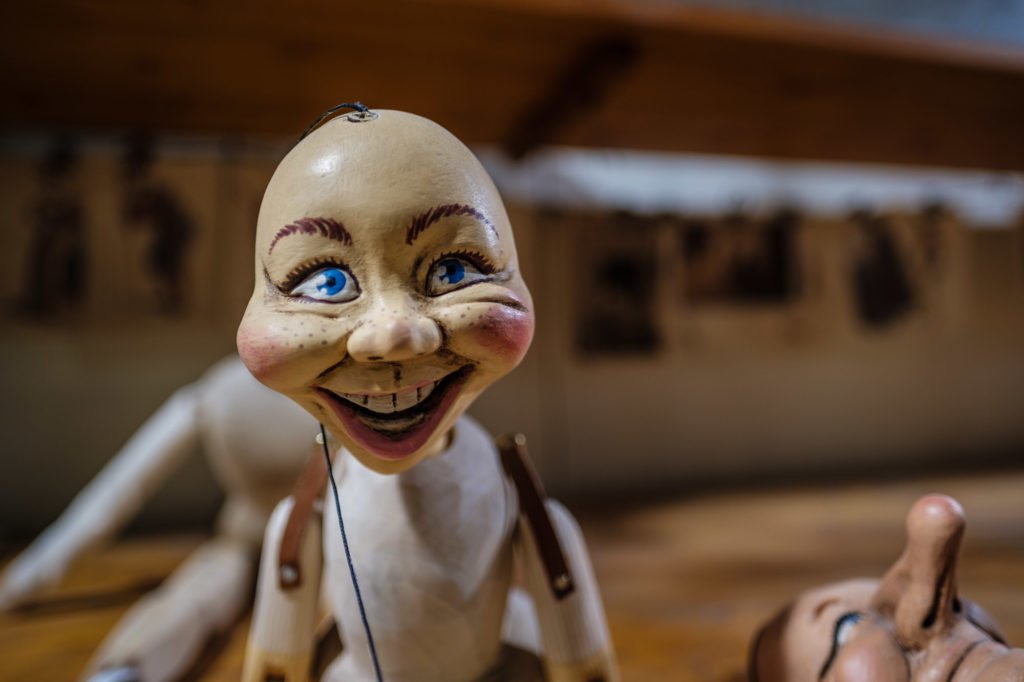 The designs for the puppets themselves are based on characters from the Commedia dell’Arte, Disney movies, historical figures or the protagonists of books. He was commissioned a series of marionettes representing William Shakespeare that some English schools use to teach literature to young pupils. 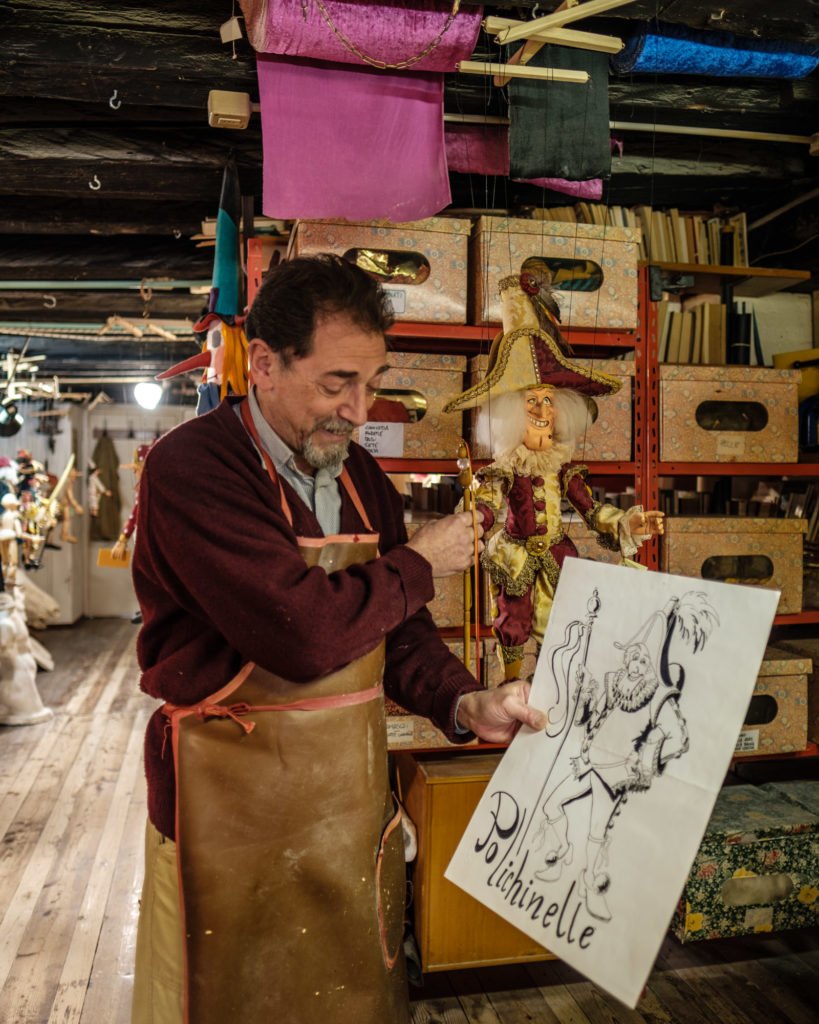 Roberto and the sketch for Polichinelle

An American ex-baseball player wanted a marionette of himself wearing a Red Sox uniform and Roberto made it able to hold and swing a bat when the appropriate strings are pulled. Another customer wanted a Cleopatra with the face of Elizabeth Taylor and a friend of Johnny Depp’s ordered a Jack Sparrow for the actor’s birthday. Every time, Roberto does an iconographical research to create puppets that resemble the original character as much as possible. 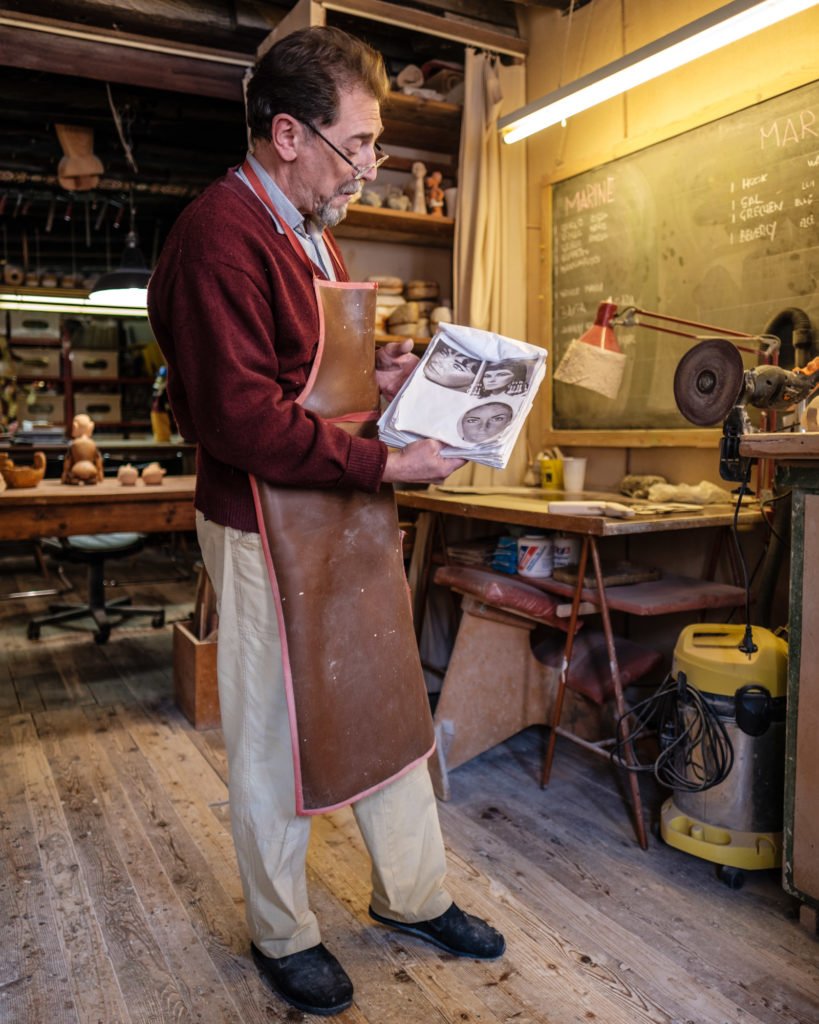 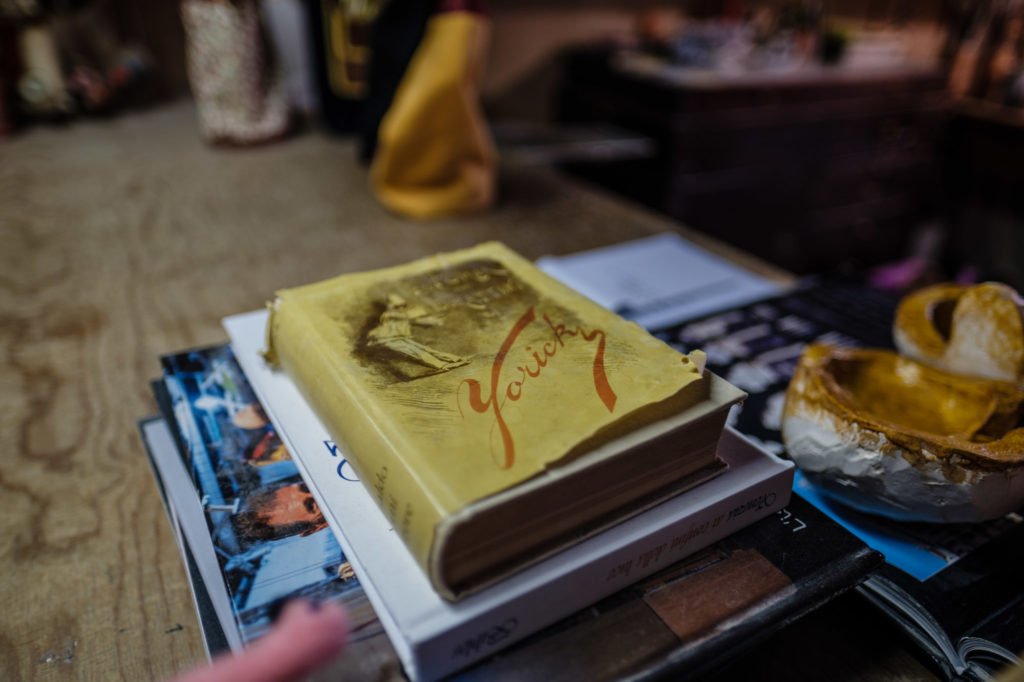 Some of the books Roberto uses for inspiration

Roberto Comin left a job as a building surveyor to pursue his life’s passion. His creations might look like toys, but they are the works of an artist that has few equals in the world and whose art will disappear with him, as he has no apprentices.

I will make sure to include a visit to Roberto’s atelier in my future tours of Venice. In the meantime, you can check out his website and maybe order a puppet or two. 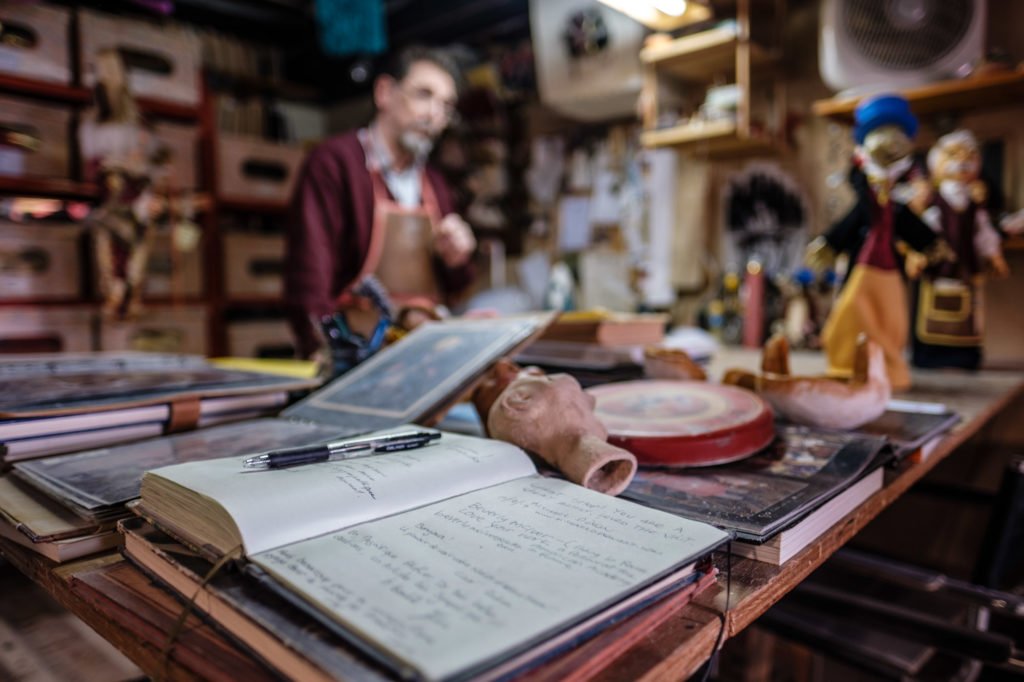 Places like Roberto’s workshop are exactly the kind of discoveries you will make if you join me in my Venice Unknown photo tour. 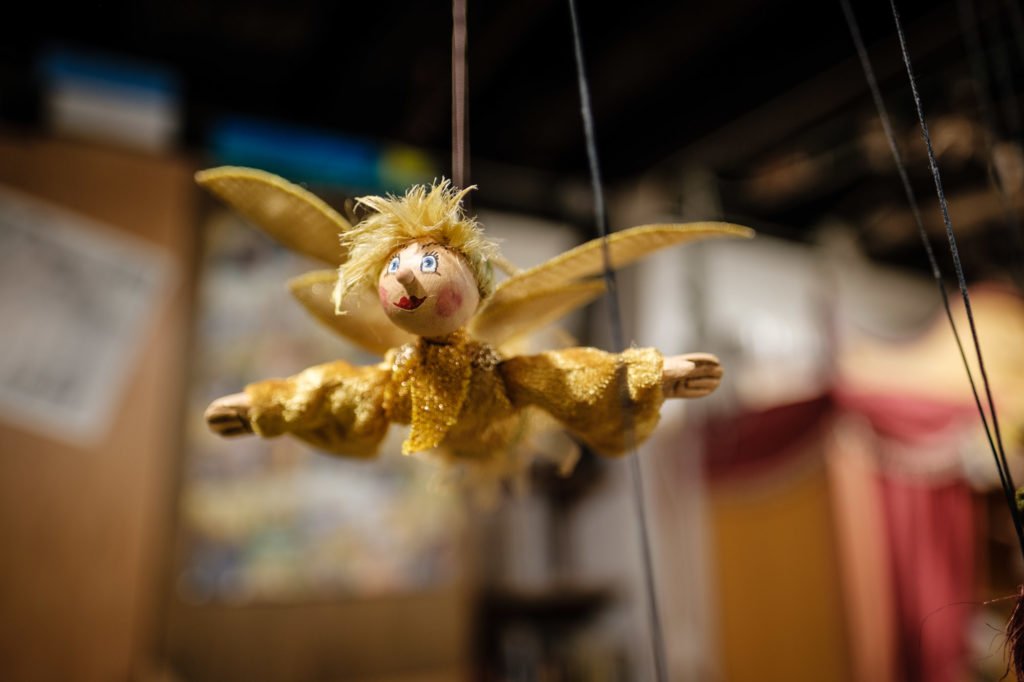 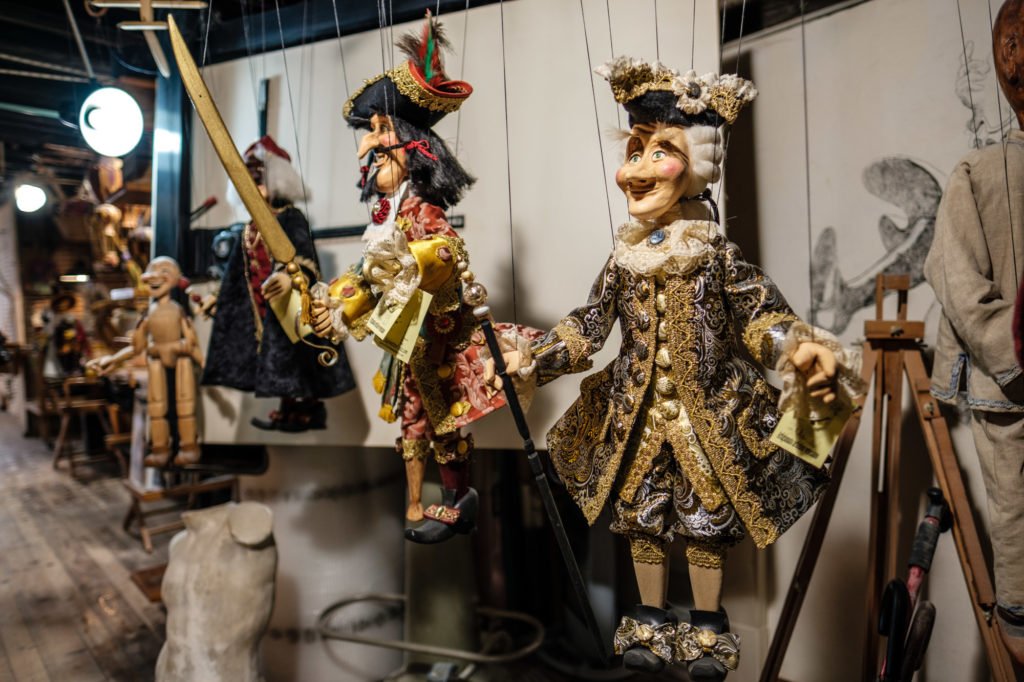 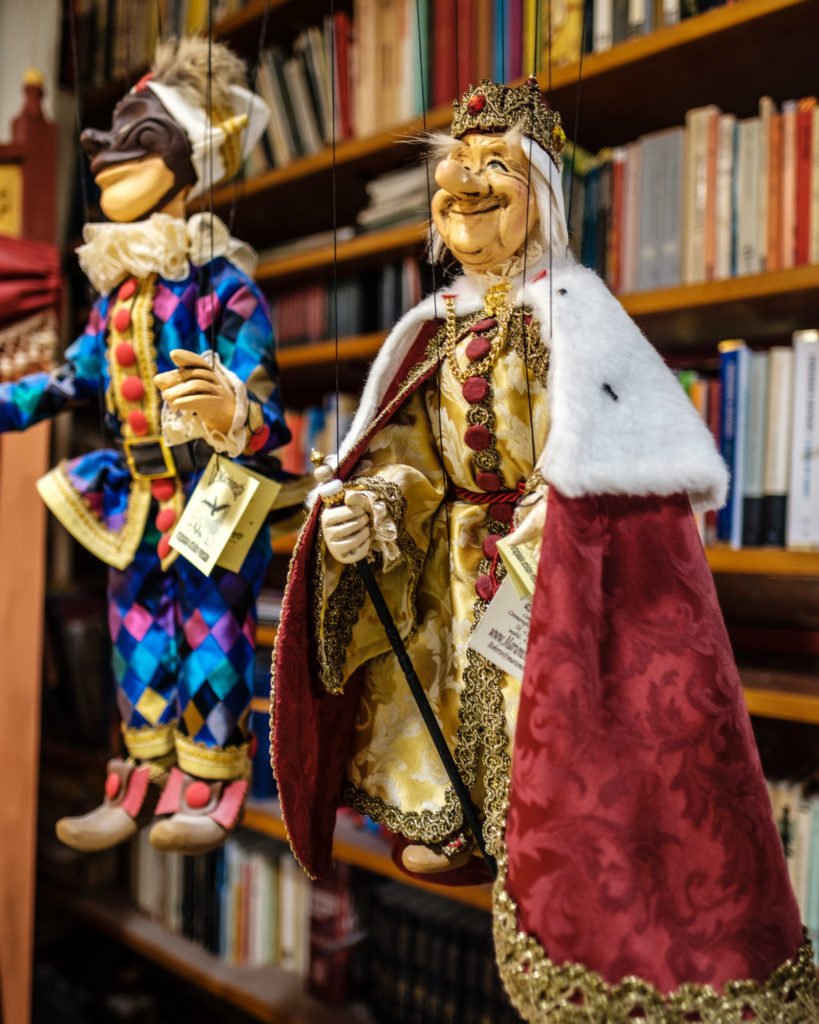 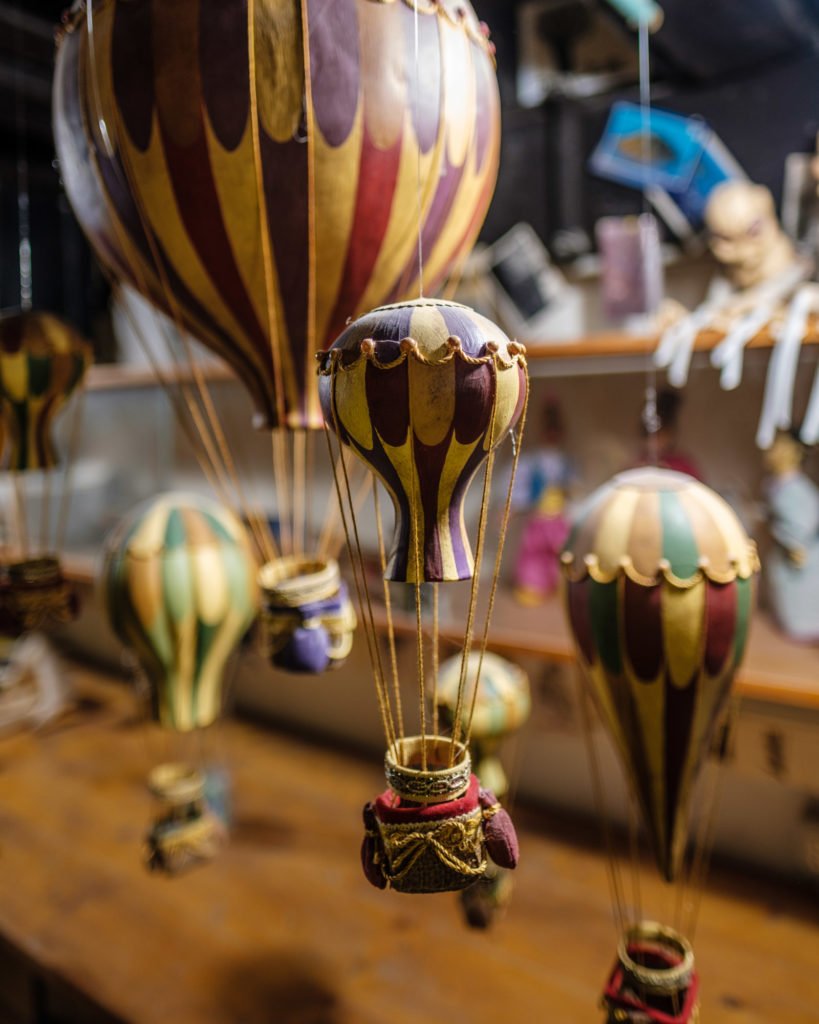 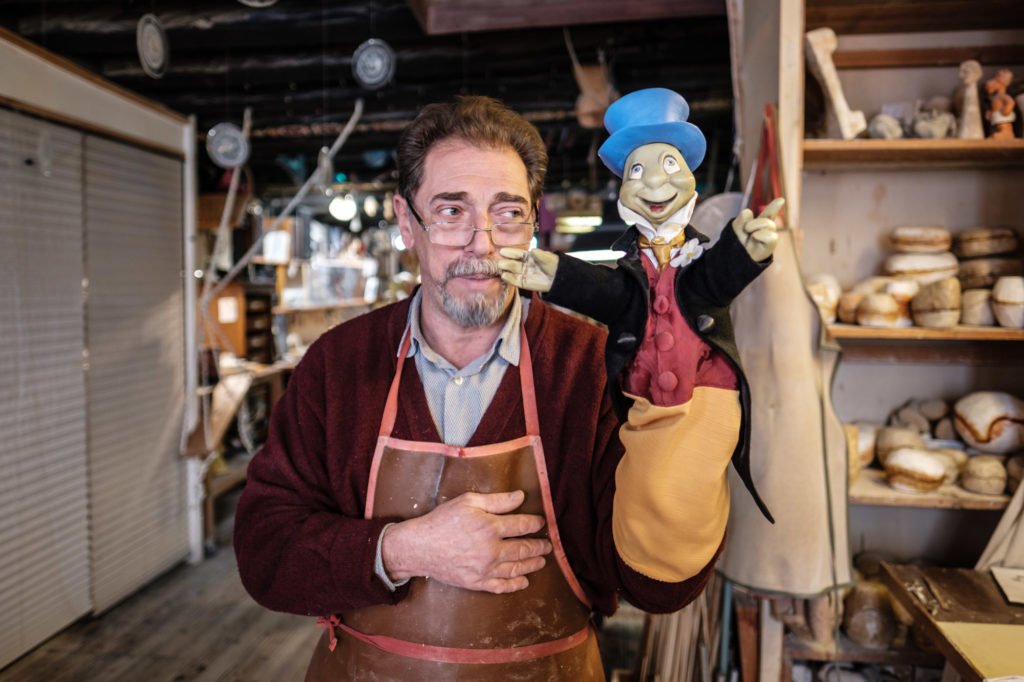 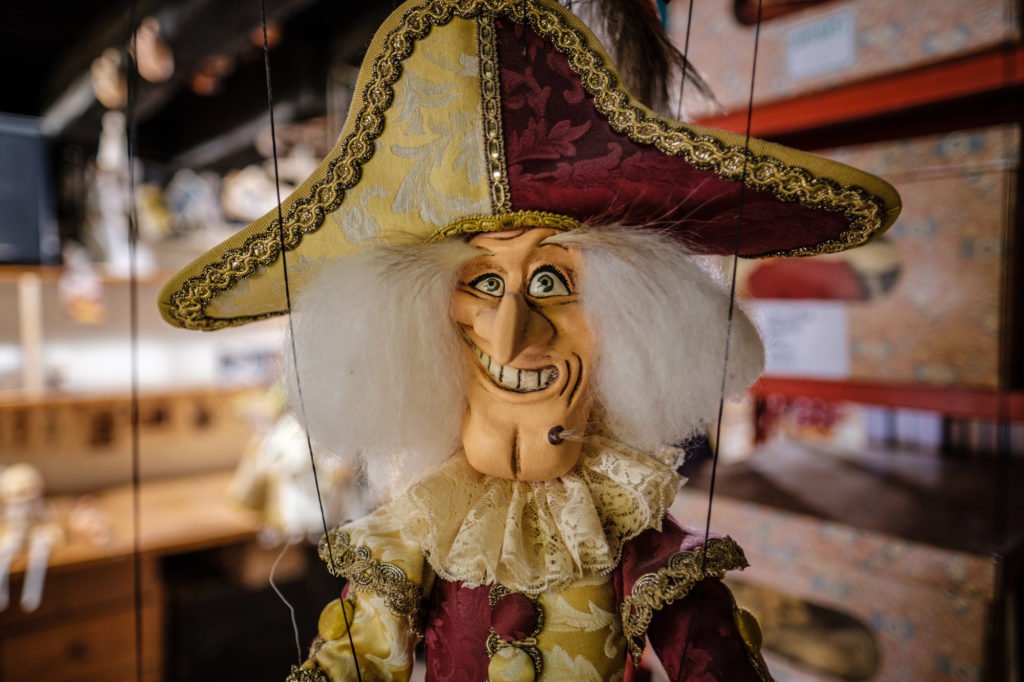 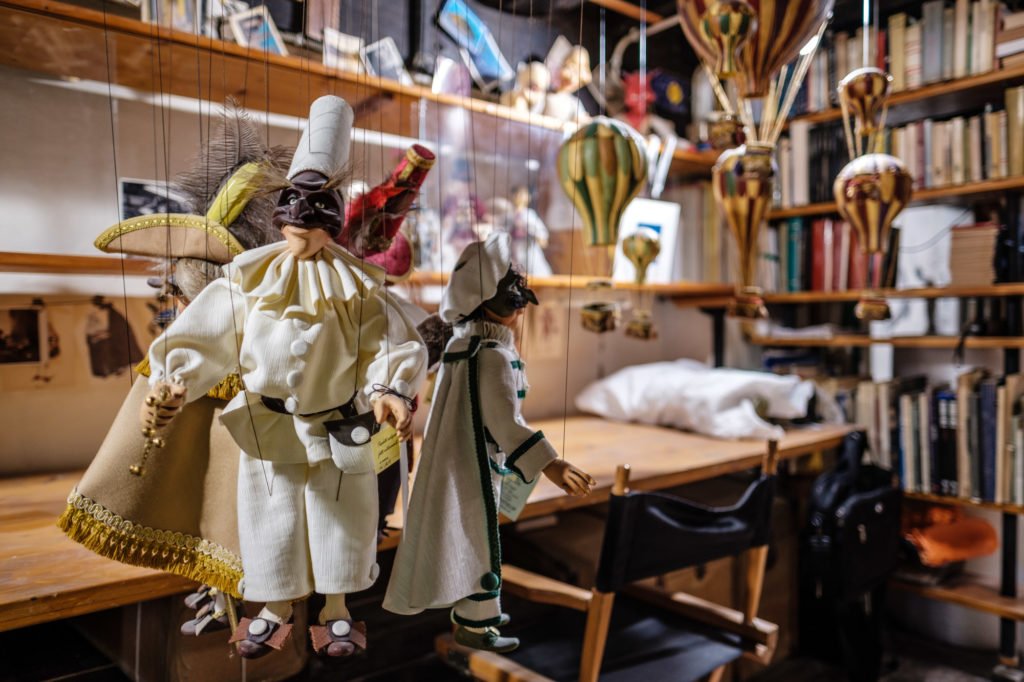 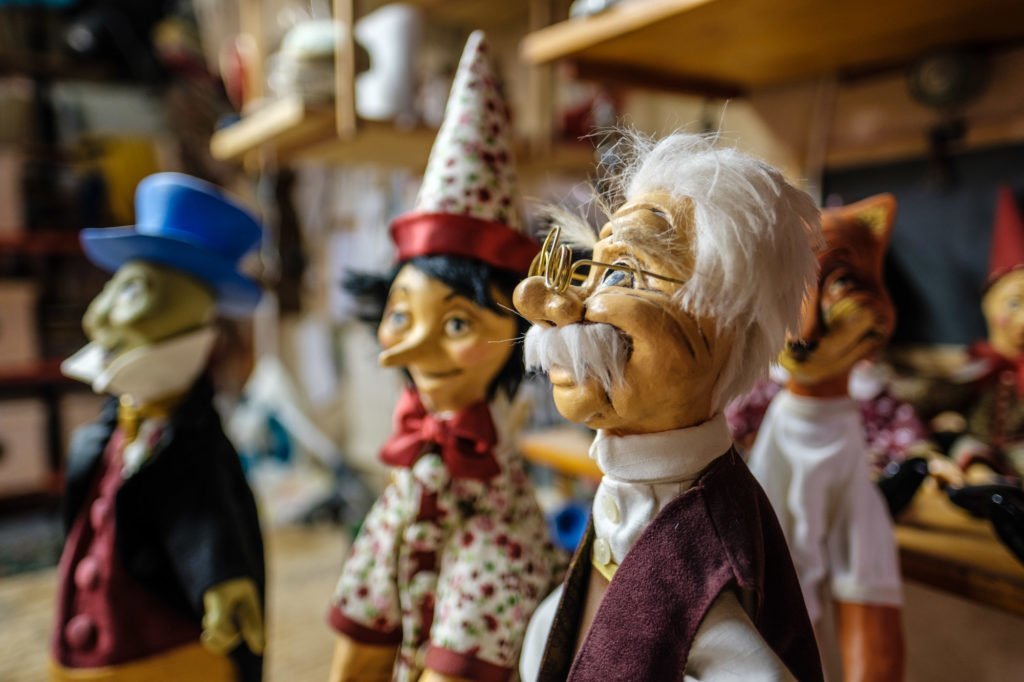 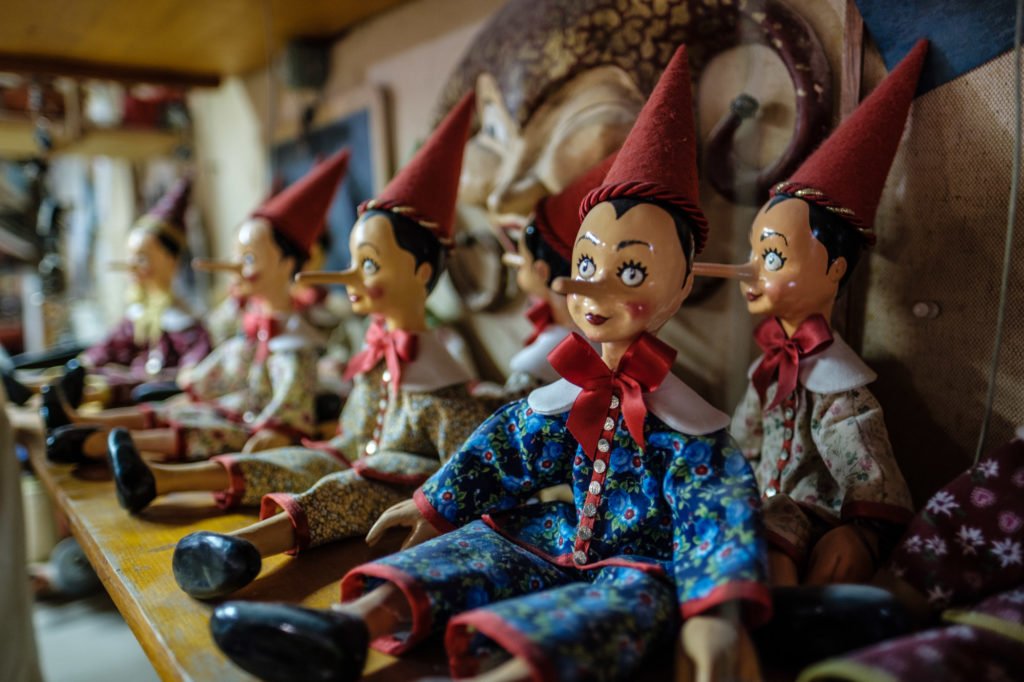 An array of Pinocchios 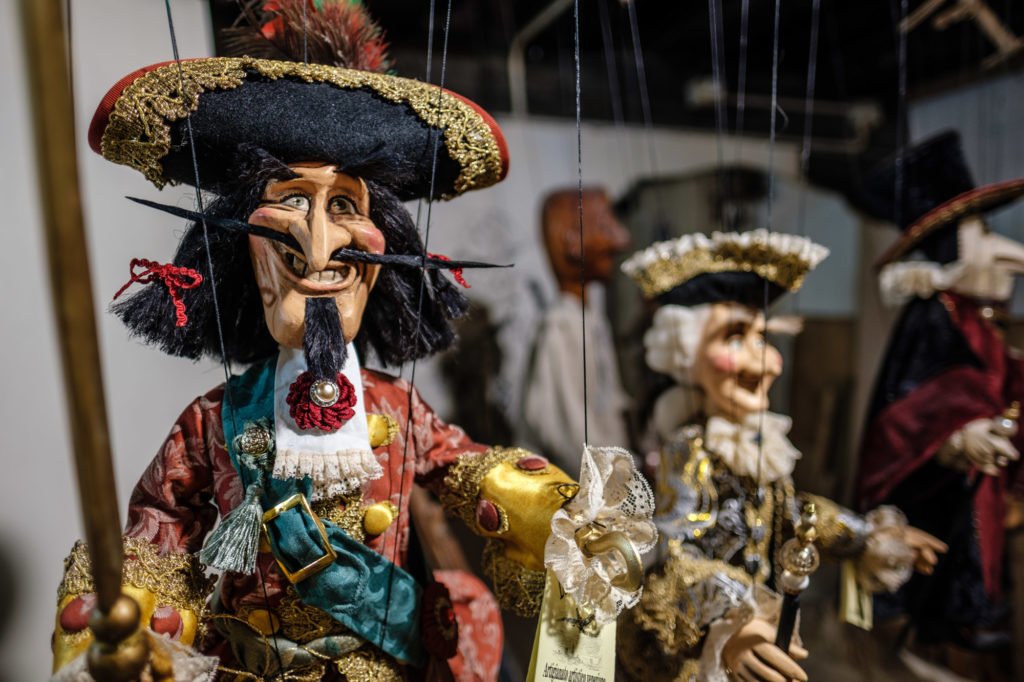 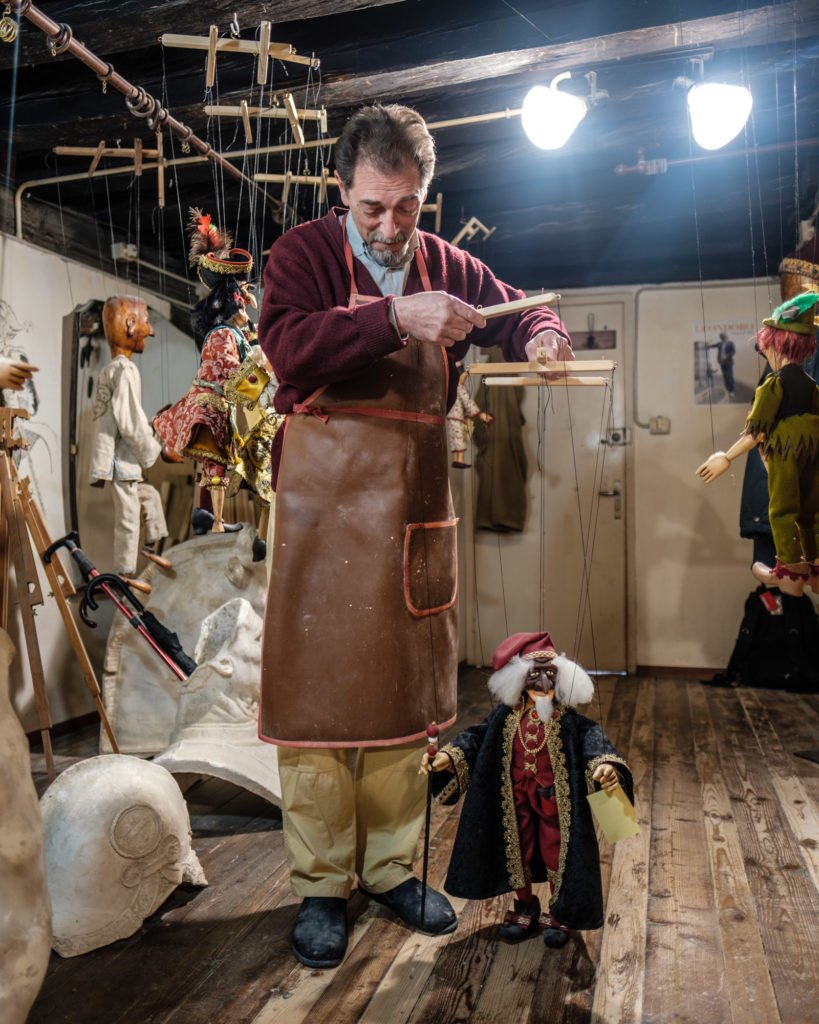 Roberto operating one of his marionettes