One year after my latest foray into Venice for the Carnival I was back there with a new group of students, new equipment and a number of new ideas about portrait lighting that I wanted to experiment, having at my disposal an endless supply of subjects in the form of some of the most beautiful Venetian masks.

You can find a detailed tutorial about the techniques we used back then in my two-part article Venetian Carnival Portraits with Off-Camera Flash (Part 1 is here, Part 2 is here).

The previous year I had limited myself to using one flash and one modifier, but this time me and my partner Robin were definitely going to push the boundaries of our creativity. One of our devious plans was to shoot some of our close friends’ movie-inspired outfits to create what Robin calls the Venetian Movie Series. We just couldn’t do that with a single light source and our intent was to raise the bar for everyone. I think we succeeded brilliantly!

A word on equipment. I still had my old and trusty Nikon SB-900 speedlight with me, mostly because it’s a very sturdy and reliable piece of gear, but using that would have meant changing the power setting manually on the flash every time. Kind of impractical if I had to use another flash. I also brought along a large octagonal softbox that requires you to put the speedlight inside of it. Consequently I would have had to open a corner of the diffuser and reach inside with my hand every time I needed to change the flash settings. This called for a way to set the flash power remotely.

So I did a bit of research to find a product that would fit the bill, while at the same time being lightweight and not expensive. I use flash only occasionally and had no intention of investing big bucks on studio strobes. In the end my choice fell upon the Godox TT685F speedlight and its companion trigger, the X1T-F.

The Godox is cheap, reasonably well built (though not on par with the SB-900, of course) and packs a good amount of power. It has a built-in radio receiver so, in order to pilot it remotely, you only need a transmitter and not any additional receivers. The X1T-F can drive up to four groups of flashes independently.

An additional advantage is that Godox makes versions of its flashes and transmitters for various brands of cameras, including Fujifilm. The “F” at the end of the model names indicate those are the Fujifilm versions that allow shooting in TTL mode and that also enable High-Speed Sync when used with a Fujifilm camera.

While our students during the workshop had cameras of different brands, it was still possible to use the flashes in manual mode (no TTL) and tweak the power remotely, without having to go to every flash individually to push the buttons. The very clear and illuminated LCD display on the transmitter unit makes this a breeze. At the same time, I now have the option of using TTL and HSS with my Fujifilm cameras, both remotely and on the hot shoe.

I ended up ordering two TT685F units and one X1T-F transmitter. In addition to those, I also brought to Venice a Neewer 480 LED panel, in case we wanted to use continuous light.

To create this image (photo by Robin Yong) we used a speedlight inside a softbox as the main light, camera left. Another speedlight was placed bare on a stand, behind and to the right of our models, to act as rim light. You can clearly see how it lights up the rim of the figure on the right and helps make her stand out from the background. 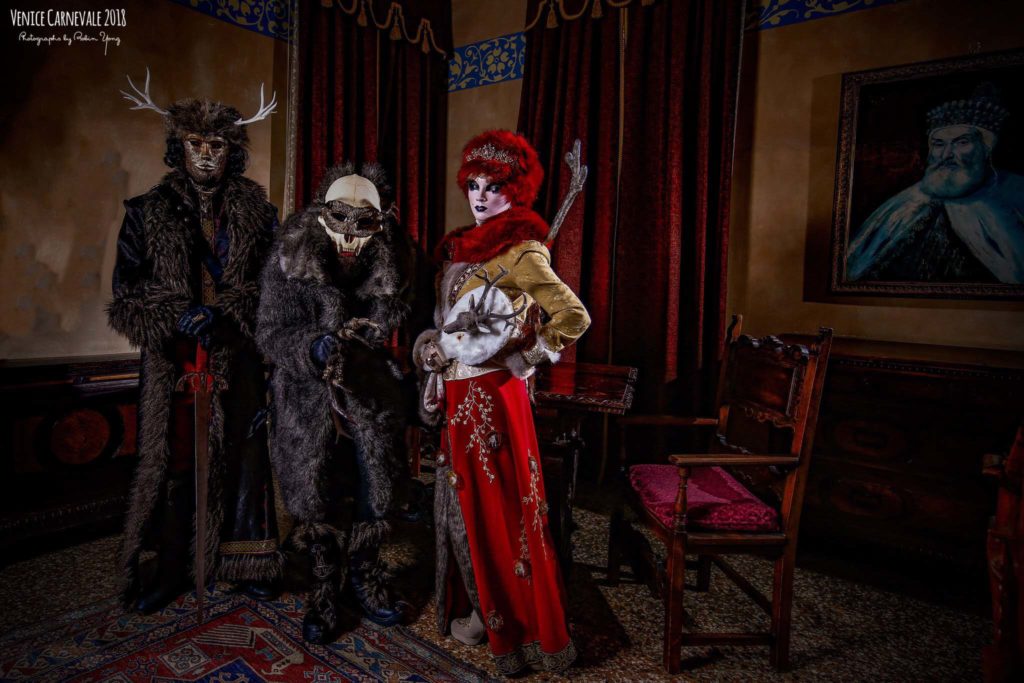 This is another shoot where we used two lights. I wanted to give a lot of punch to this photo of Gianluigi Merisio and his “Illuminato” character, so I put a speedlight on the ground on a small stand, right behind him and pointed towards his back. This makes him really pop out of what would have otherwise been a very dark alley. 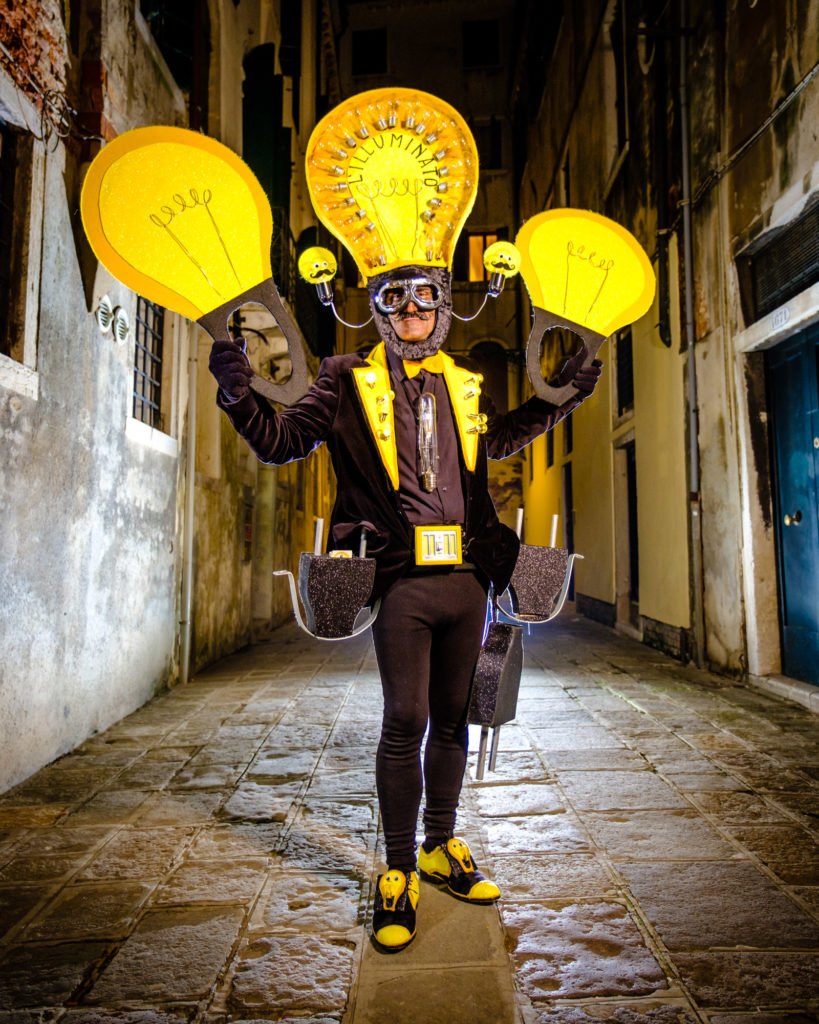 The main light in this case is provided by the LED panel on a stand, camera right, plus a smaller LED panel on the left. For this type of situation, the LED lights proved to be not powerful enough. Consequently we had to slow down the shutter speed and get more than the usual number of blurry pictures, because of camera shake.

Not wanting to make the same mistake again, we used both speedlights for the next session. One is in front, camera left and inside the softbox. The other one is behind the subjects, on a stand, pointed towards the back of the alley, bare and with a green gel. It only takes a little suspension of disbelief to think that the green halo in the back is caused by the streetlamp above.

Not having to rely on the relatively dim and continuous provided by LED panels, I could shoot at 1/250s and never have a problem with slow shutter speed and camera shake. The contribution of ambient light here is negligible. 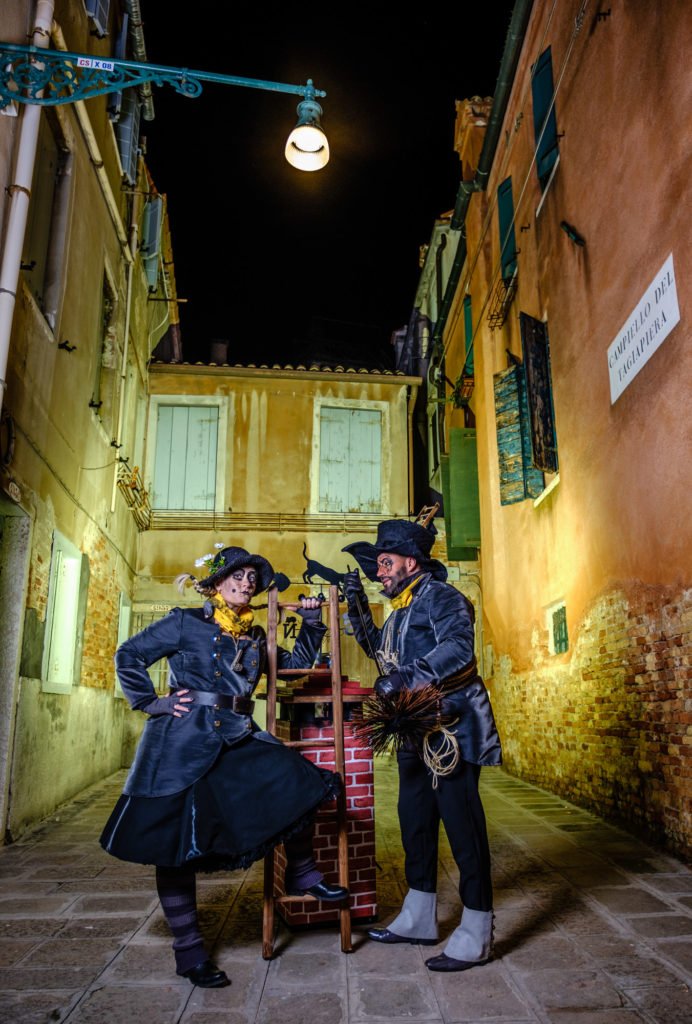 We started using two lights during our indoor sessions too. This one again used a speedlight as the main light. The room, however, was very small and putting a light to one side of the group would have created too much of a difference in illumination between the side nearest to the flash and the opposite one. 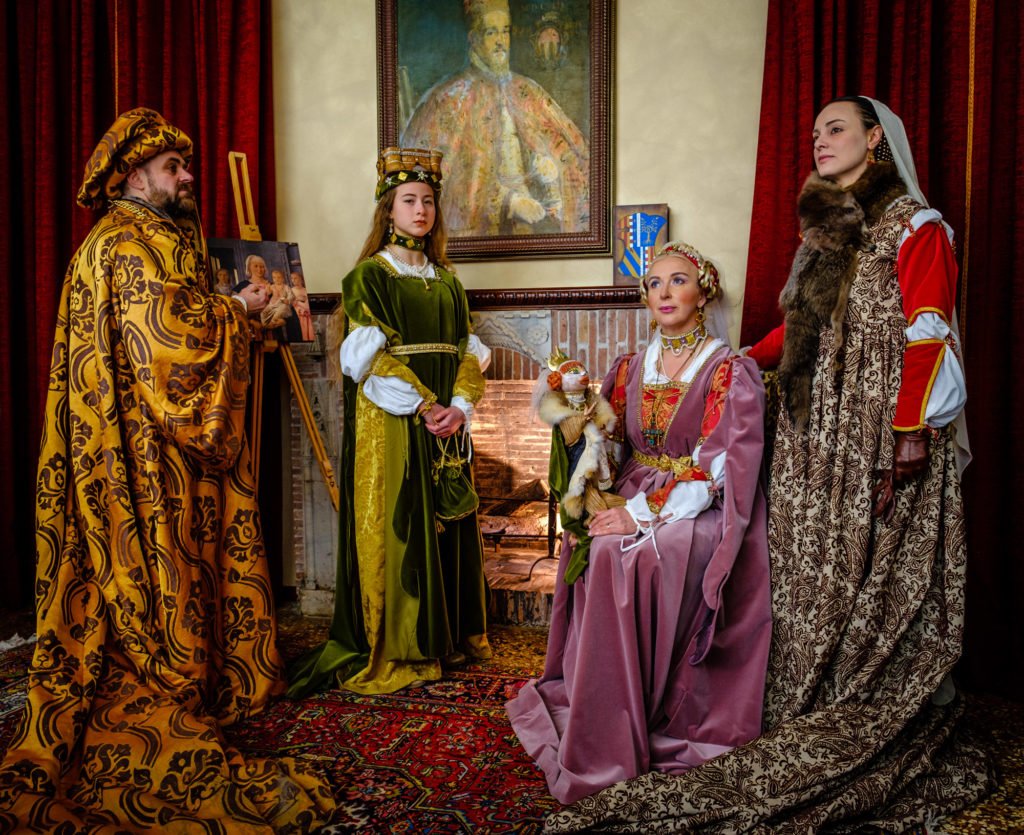 When shooting groups, the recommended solution is to use one light on either side and have each light point towards the opposite end of the group. Having destroyed my second softbox on our first night of shooting, however, I would have had to use one light bare. The room was also so small that I didn’t want to put down another stand, as this would have made it difficult to frame and to move around.

The solution I adopted in this case consisted of bouncing the main light off the back wall and the ceiling. I did this by turning the softbox around and removing the diffuser. The loss of power was significant, so I had to set the single unit to maximum output, forcing us to shoot at a slower pace in order to give it time to recharge between shots.

It would have been better to use two speedlights together, each one set at half power, but my only surviving softbox had no room for two flashes, whereas the dead one had.

We still used a second flash in this shoot. Can you guess where? See the orange glow inside the fireplace? It was created by placing the speelight inside it, at a very low power level and with a red gel in front. Brilliant!

Before closing, I want to show you a couple more photos. When shooting inside those kinds of rooms, we always have to pay attention to the reflections on the shiny surfaces of the oil paintings and of wooden furniture. Even after you have taken care of those, other can appear when the subject wears eyeglasses. In this case we were still bouncing the light off the walls, but enough light filtered in the space between the flash mount and the softbox to create an ugly reflection in spectacles worn by the model. 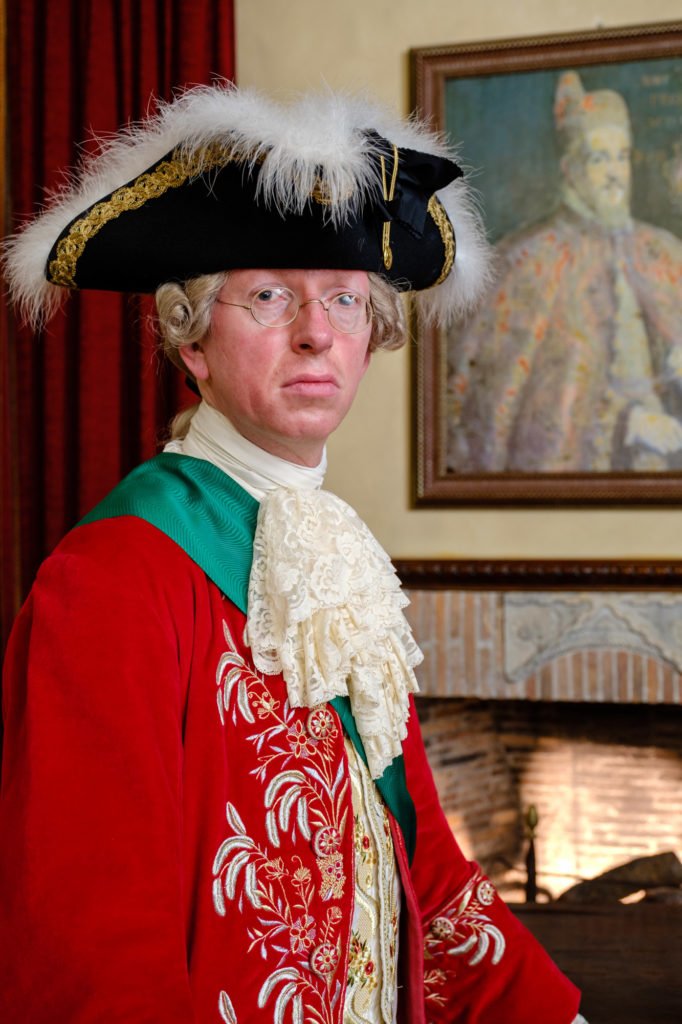 Reflections in the eyeglasses

The usual solution in this case would be to either ask the subject to remove his glasses or to move them forward, so that they are almost sitting on the tip of his nose, and to orient them downwards. Both of these solutions proved to be impossible, since in order to do so, he would have had to remove his wig.

So I just asked him to tilt his chin slightly downwards. Et voila! 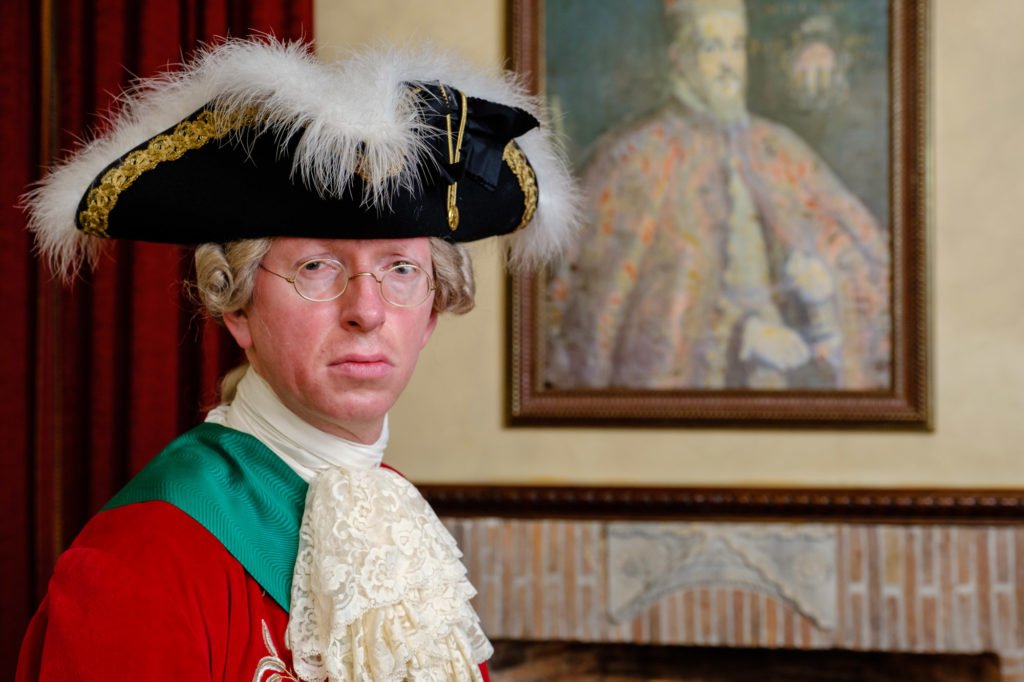 We are already thinking of what we can do next year to raise the bar of creativity even higher. The Venice Carnival with us is an experience unlike those offered by any other photography workshop, so why not check out our program for 2019 and join us there next year?