I was recently in Venice during the Carnival celebrations, leading a workshop there. One of the things we wanted to teach our attendees was an introductory lesson on off-camera flash photography. This is kind of a necessity during the heyday of Carnevale di Venezia, which can be pretty crowded and chaotic. Forget about taking photos of the most extravagant costumes during the day, because your subjects will be constantly surrounded by crowds of tourists who only want to take a selfie together with them.

In the first article of this series, I explained the challenges a photographer has to face and the benefits afforded by the use of flash. In this second part, I will provide more technical details about the equipment and the settings we used.

No time to read this article now? Click here to download a free PDF eBook containing my best selection of articles about photographing Venice.

While it would have been nice to have multiple lights and various modifiers at our disposal, we had to face constraints that severely limited our choices.

First of all, we wanted a very compact kit. We moved across the city, setting up and taking down everything in different locations. Keep in mind that you cannot drive a car in Venice and that the only means of transportation are boats and your feet. We just had to walk a lot and I didn’t have an assistant to carry my equipment.

The second consideration was that we needed something compatible with our students’ cameras, which were all over the place. We had people with Fujifilm, Canon, Olympus, Sony, and Panasonic cameras in this group. We just couldn’t afford to have one flash of each brand! Curiously, even though we didn’t have any Nikon cameras in our group, the flash we used was my old, but dependable Nikon SB-900 speedlight.

I bought that flash back in the day when I was still shooting Nikon and I kept it even after I moved to Fujifilm. The reason is that it is a very powerful, flexible, and reliable unit. Of course, using a Nikon flash on a Fujifilm camera (or a camera of any other brand) makes it impossible to use the flash in auto (TTL) mode. Even if I had a Fujifilm flash, while I could use it in TTL mode with my Fujifilm cameras, that would not have helped the others, so manual mode it had to be.

I had no doubts that the SB-900 would perform flawlessly and in fact it did.

Another essential piece of equipment was a radio trigger, which would enable us to put the speedlight off-camera and inside a modifier, without using cords that would pose a danger, in case people tripped on them. I chose to use the super-simple and pocketable FlashQ triggers. Again, the choice was determined by the desire of saving as much weight and space possible and of setting up everything as quickly as possible. 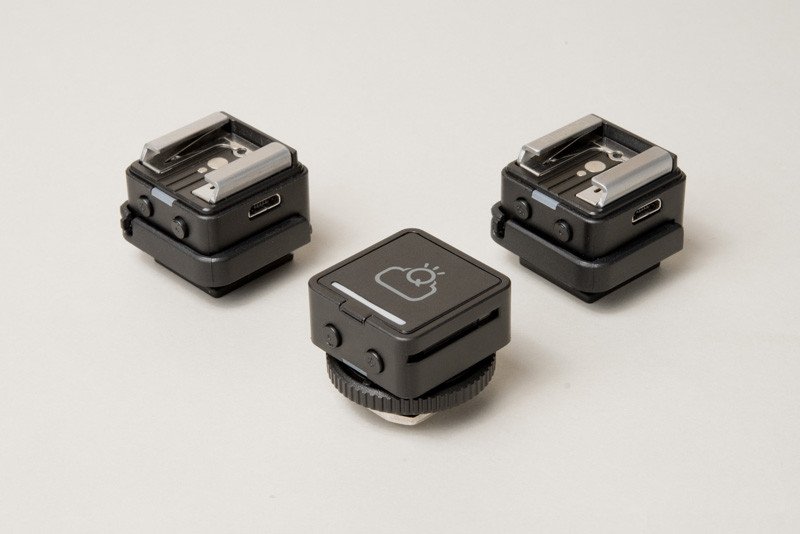 The FlashQ are incredibly small. Even too small, maybe, since I often had to wonder where I had put them. Their transmitters and receivers will also pair automatically, so you don’t have to fiddle with switches or dials to set channels. The main drawback of the FlashQ system is that you can’t have multiple transmitters pilot a single receiver. That was only a minor inconvenience, since it meant that the transmitter had to be passed from one person to another, as they were taking turns shooting with the flash.

The FlashQ performed flawlessly until the last day, when at some point they stopped pairing and communicating with each other. Rather than trying to fix the issue on the spot, I brought out a small LED panel and we switched to using continuous light. Next time, I will make sure I have a spare FlashQ pair ready to use as a backup.

The main modifier we used was a softbox. Again, I had to accept some compromises for the sake of portability, so I elected to bring with me an 80x80cm foldable Godox softbox. It’s cheap, lightweight and folds down to nothing, so it was a pretty obvious choice. If this had been a serious assignment, I would have liked a larger softbox, but for teaching purposes, it was just about right. We also tried using a grid in at least one session, but we weren’t completely satisfied with the results.

We always had the flash and the softbox atop a Manfrotto 5001B light stand. Once more, a piece of equipment that is incredibly useful, but is lightweight and very foldable. We just had to be careful not to let people bump into it and topple it over. At one point, when we were shooting on the Accademia Bridge, we caused quite a commotion. Evidently, our professional-looking equipment attracted a lot of attention and somebody must have thought our models were VIPs or something. We were quickly surrounded by a crowd with cameras and smartphones trying  to get their piece of the action and I had to hold onto the light stand all the time, lest it end up head-first into the Canal Grande.

Shooting at the Edge of the Day

We did a few sessions right after sunset, trying to get a perfect balance between a nicely lit foreground subject and a deep blue sky, with the addition of some nice Venetian architecture, like the Basilica di Santa Maria della Salute, in the background.

The trick here is to “gel” the flash with a CTO (Color Temperature Orange) gel and set the white balance of the camera to incandescent (usually identified by a light bulb symbol). The CTO gel is nothing more than a piece of orange film that you stick in front of the flash head. While this makes the light from the flash orange, the incandescent setting of the white balance compensates for it. At the same time, everything that is not hit by flash, including the sky, gets much bluer.

Underexposing the ambient light makes colors more saturated and you end up with something like this. 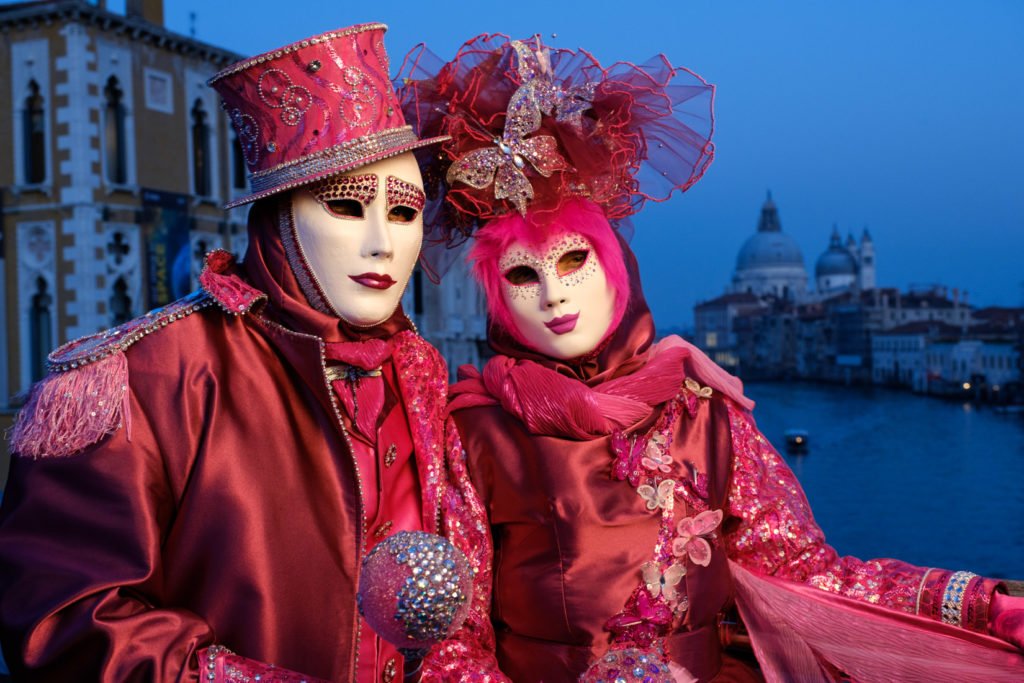 Of course, it is imperative to shoot  in manual mode and to remember that shutter speed is the independent control that lets you change the ratio between ambient and flash light, as the latter is not influenced by it. So, by varying shutter speed, it is possible to make the environment darker or brighter, without impacting exposure from the flash.

The main problem, in a situation like this, is that ambient light changes rapidly, as the sky after sunset goes from light blue to deep black in less than one hour. To account for this, you need to “drag” the shutter, that is to make exposures longer and longer.

As the evening progresses, shutter speeds become so low that ambient light “bleeding” onto the main subject makes it blurry, especially at the edges. At this point, it might be necessary to increase aperture or ISO, keeping in mind that this will affect flash exposure as well. You must of course take the flash power down proportionally, to avoid overexposure.

This is exemplified by these two images. The first one was taken at the beginning of our session. Settings were 1/125s, f/2.8, ISO 800. 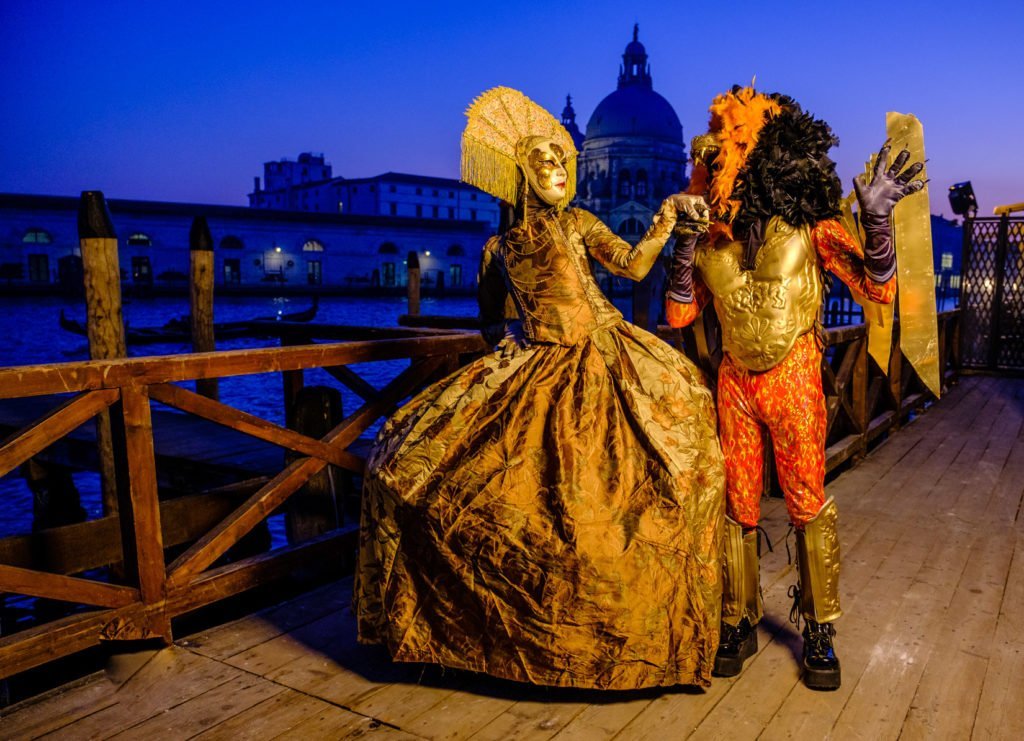 The second one was taken right before we started packing everything up, only 23 minutes laters. Setting were 1/4s, f/2.8, ISO 1250. The difference in ambient exposure is staggering: almost 6 stops! 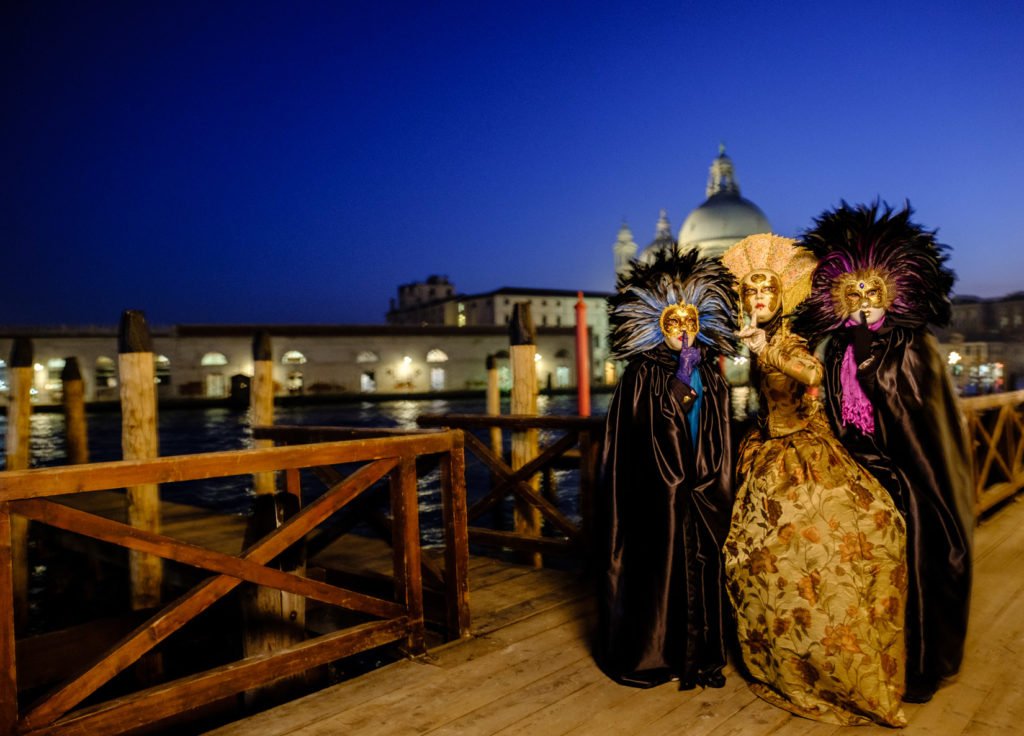 For illustration purposes, here’s a couple behind-the-scenes images, showing our setup. You might notice that we kept the softbox at some distance from our models. While I would normally bring a softbox of that size much closer, in order to get softer light, our students were sometimes shooting really wide, in order to include as much of the scenery as possible, so the softbox might have intruded into the edges of the frame, had it been moved closer. 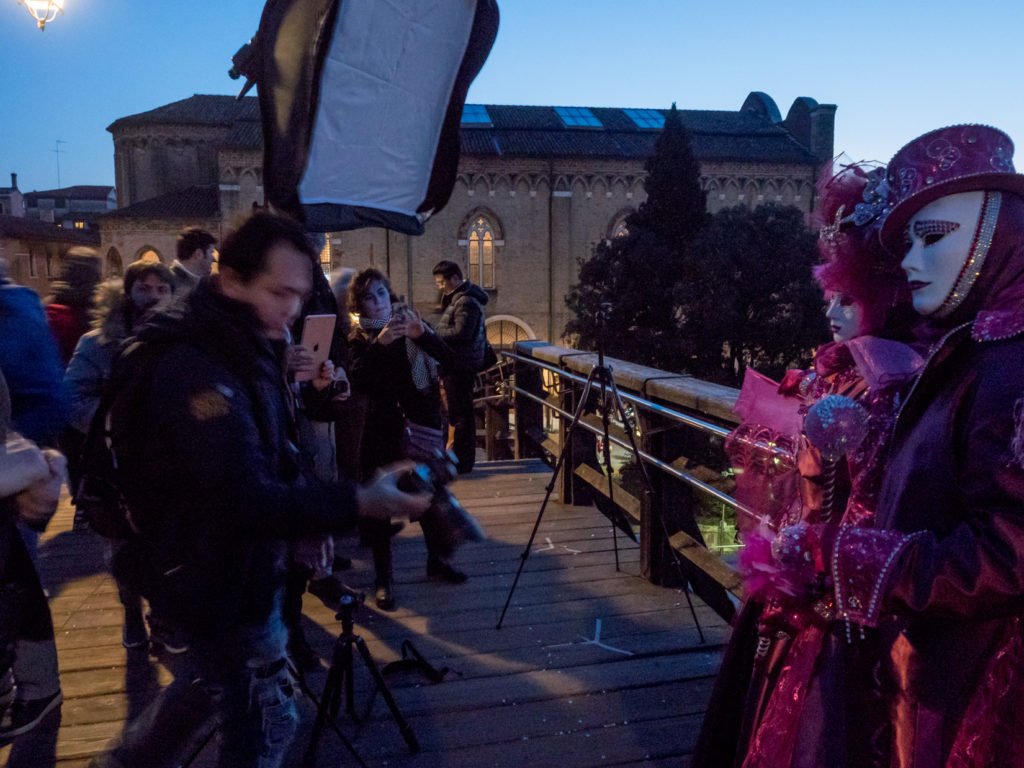 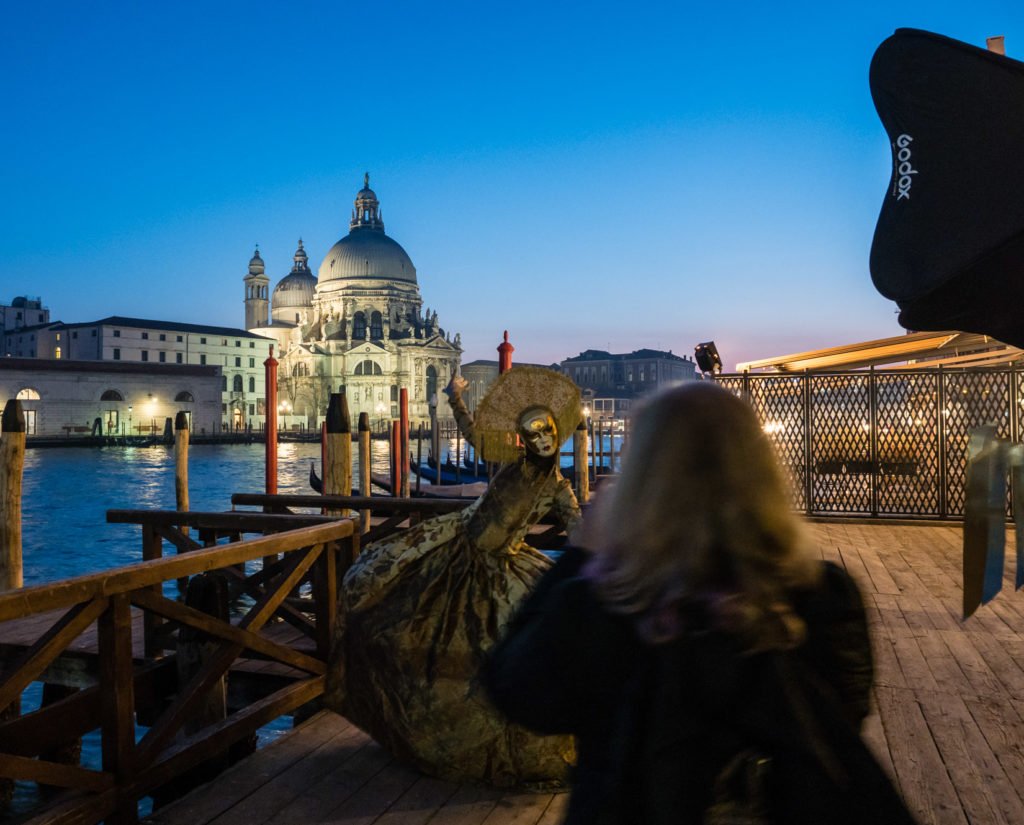 Our indoor sessions were, by comparison, a much more relaxed affair, since ambient light was not changing as fast. Sometimes we had natural light coming in through the windows and that tended to change during the day, but not by much.

The biggest issue we faced were reflections of the light source caused by paintings on the wall or, in some cases, furniture. We tried to fix those by moving the softbox around, but since we were quickly going through different angles and poses, that was not always practical. We also didn’t have any “gobos” to flag the light, but again, the intent of these sessions was not so much to get the perfect picture, but to teach our students the basics of mixing natural and artificial light.

You can see a little bit of glare in the painting on the wall in this picture. 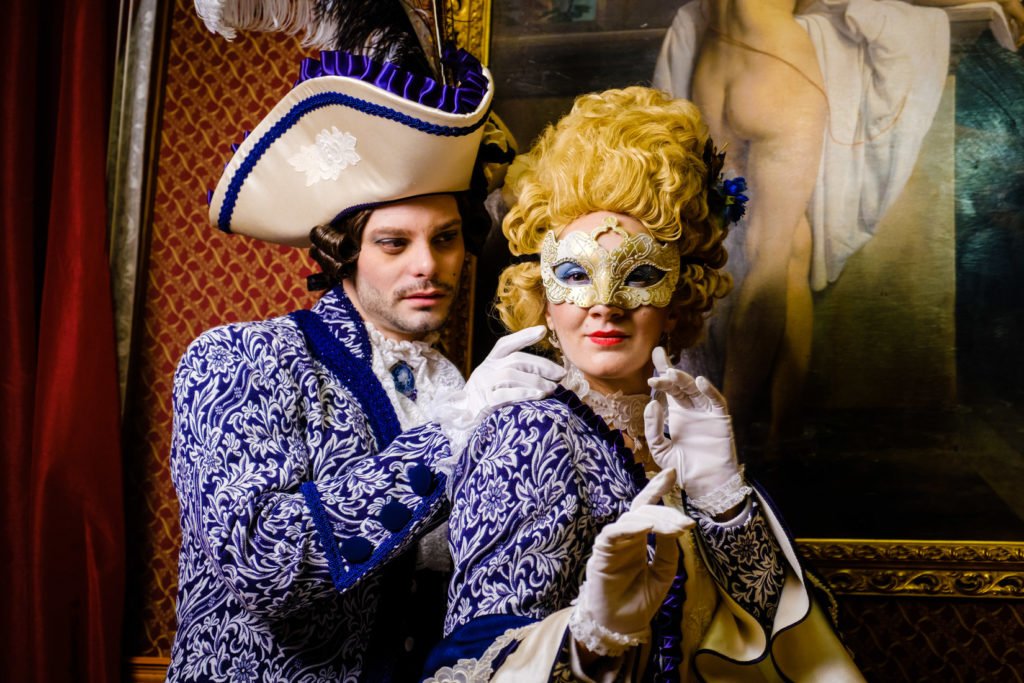 On the other hand, this one came out much better, in this respect. 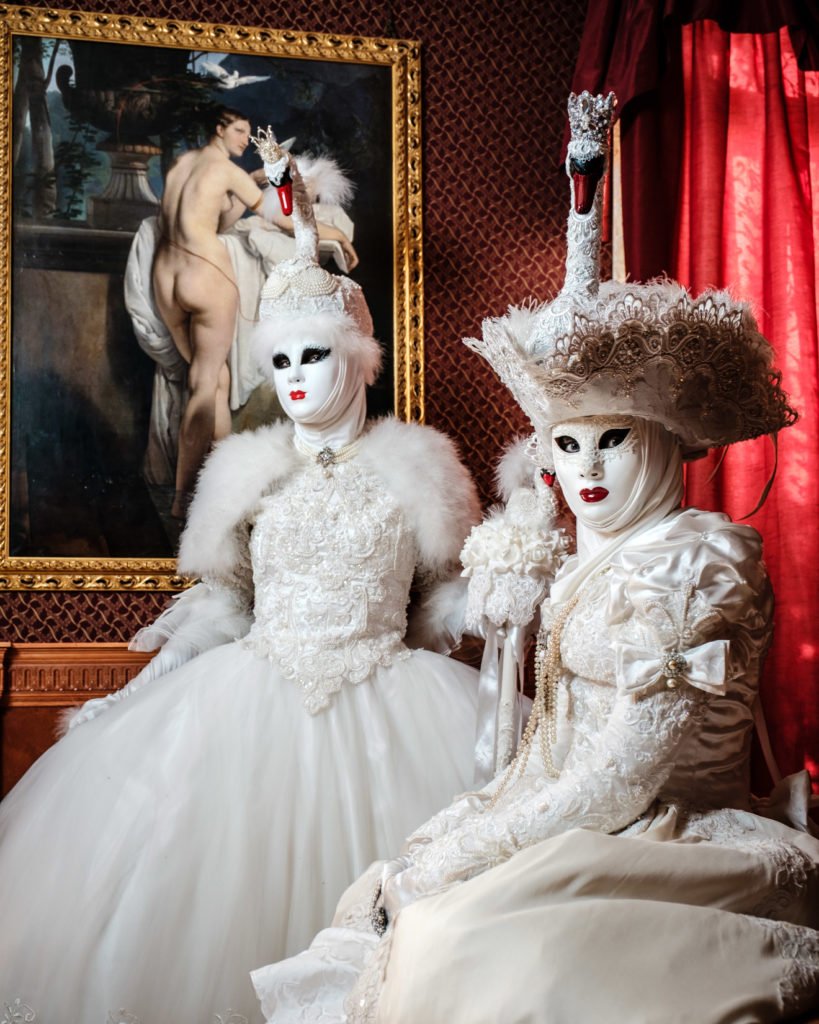 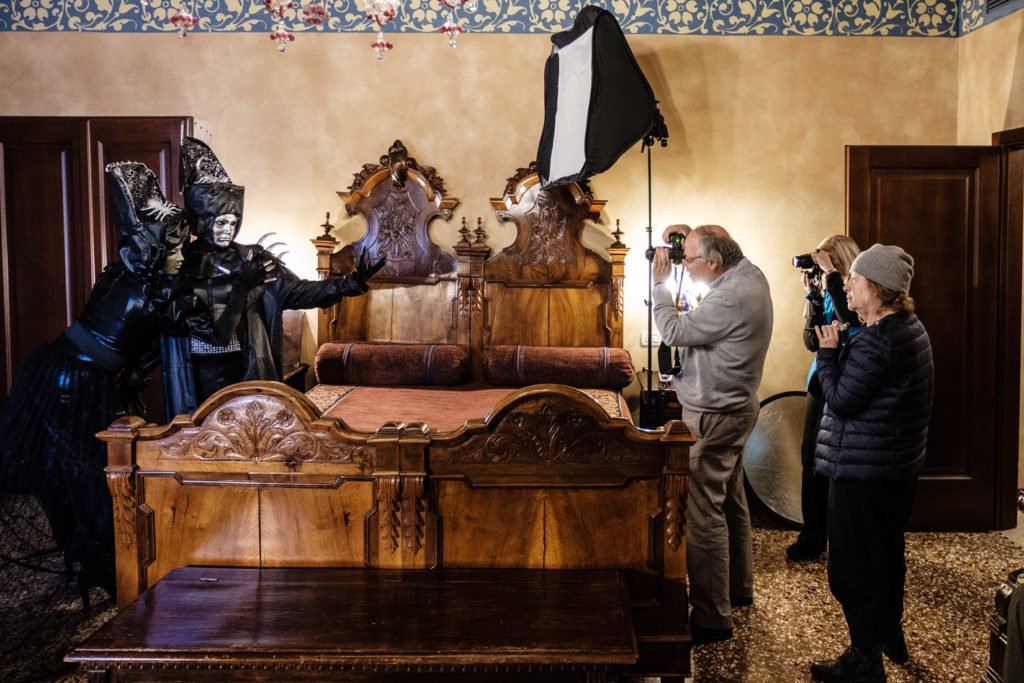 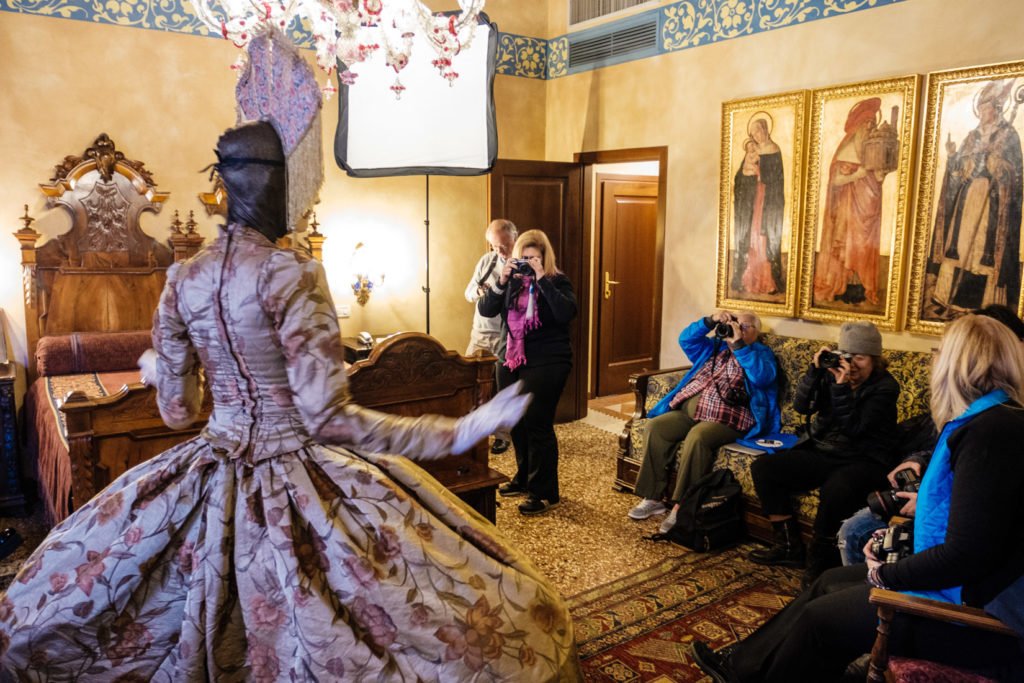 Would you like to learn how to take similar photos during the Carnival of Venice? Join one of my workshops next year! 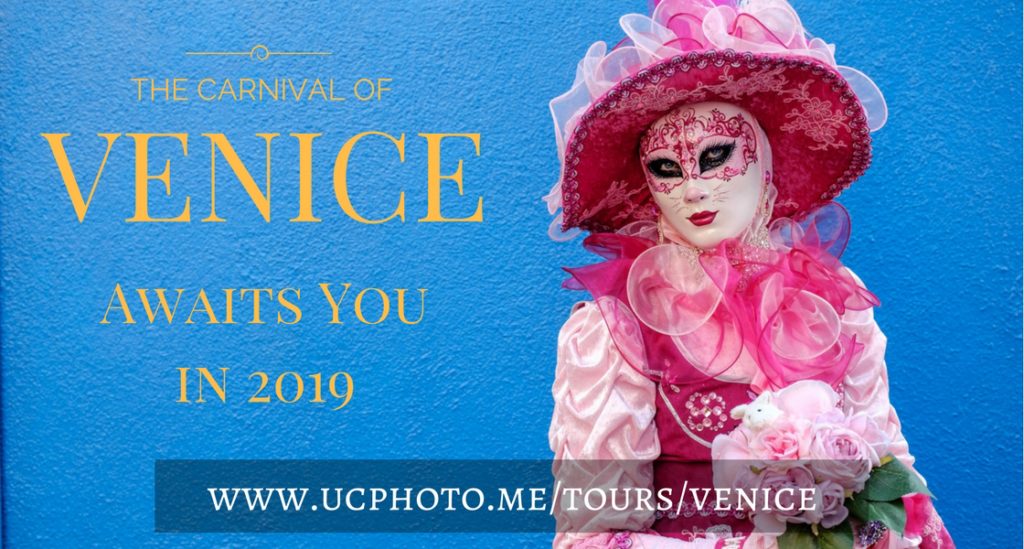