You might recall that some time ago I got myself a Samyang/Rokinon 12mm f/2.0 NCS CS lens for the specific purpose of doing some night sky photography. My first attempts were thwarted by light pollution, but having scheduled a trip to the Greek islands at the end of August, I knew that I would have had better chances there, especially considering that the trip included a new moon. Not having a bright moon in the sky is of course a prerequisite for having a good view of the Milky Way.

All that was left was to find a suitable location with some interesting foreground element. This was provided by the stone walls of the ancient acropolis of Nissyros, one of the Dodecanese islands. This is an amazingly well preserved structure that is several meters high and composed of huge stone blocks that are cut to precision in order to fit against each other, with no intervening spaces. According to the archaeologists’ estimates, the wall is from the 5th-4th century BCE, so it is almost 2,500 years old!

Having selected the location, I drove up to it one night after the moon had set and spent one hour or so trying to find the best direction and composition for the shot. Knowing that the wall would be pretty dark, I knew I had to do a bit of light painting on it. Unfortunately, I quickly realized that I had forgotten my flashlight at the hotel, but my iPhone acted as a decent substitute. Here is the best shot from that night. 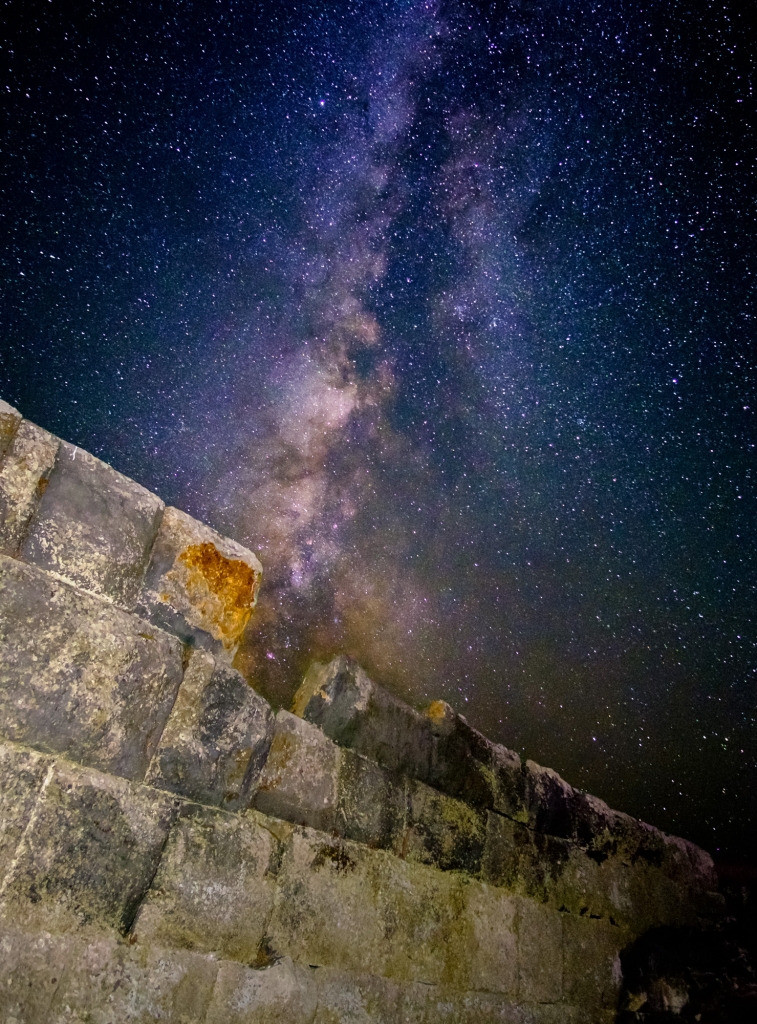 How this was made

This is a single 20 seconds exposure, shot at an aperture of f/2.0 and ISO 3200. In post-processing I had to deal with the consequences of using the iPhone’s flash to light up the wall, which is very greenish. If I had corrected that to get a good color for the wall, the sky would have turned a deep magenta, almost purple. My solution was to open up the image in Lightroom, do some initial adjustments and then create a virtual copy of it. On the original, I set white balance and tint to have correct colors for the sky and adjusted the tones to bring out the best view of the galaxy. On the copy, I adjusted the colors to make the stones look natural and corrected the tones, dialing down the exposure quite a bit, since I had “painted” them too bright.

I then opened up both images as layers in Photoshop and used the Quick Selection tool to select the wall on the top layer. I refined the selection to feather it a bit, then converted it into a mask that I then proceeded to fine tune manually with a small brush around the edges. I saved the image to be re-imported into Lightroom, where I applied some final tuning using a couple of gradient filters.

This took quite a bit of preparation and work, but I hope you will appreciate it.