Before visiting Singapore, I had this picture in my mind of a modern, very orderly and clean city, like a small Switzerland at the equator. I also came prepared to see and photograph some stunning futuristic architecture.

Of course, Singapore is all of that but, as I discovered, it is also much more.

For a start, it is home to a very diverse set of communities. There are three main ethnic groups in Singapore: the Chinese, the Malay, and the Indians, in additions to other minorities and a large number of expats. Those groups can be further subdivided into smaller groups, according to provenance, language, or religion.

The result is that many languages are spoken in Singapore (most Singaporeans are at least bilingual) and many religions are practiced.

This cultural diversity leads to an incredibly vibrant and rich city life and all those communities coexist peacefully, while preserving their own traditions. Politicians who fear immigration and who decry the lack of integration (where by integration in many cases they mean abandoning one’s traditions completely) on the part of immigrants should take note.

So I came prepared to use my tripod a lot and shoot architecture at the edge of the day, wondering what I would do the rest of my time. In the end, I found out I shouldn’t have worried because–thanks in large part to being shown around by a local friend–I ended up having more opportunities and many more interesting subjects to photograph than I thought possible.

In the following sections, I will present some pictures from a few of the neighborhoods we visited.

We visited Chinatown on a very quiet morning, so there weren’t many people outside and the chances to do some good street photography were very limited. So I concentrated on details like the red lamps hanging from wires across the streets, the offerings lined up outside the Buddha Tooth Relic Temple, and the colorful shophouses. 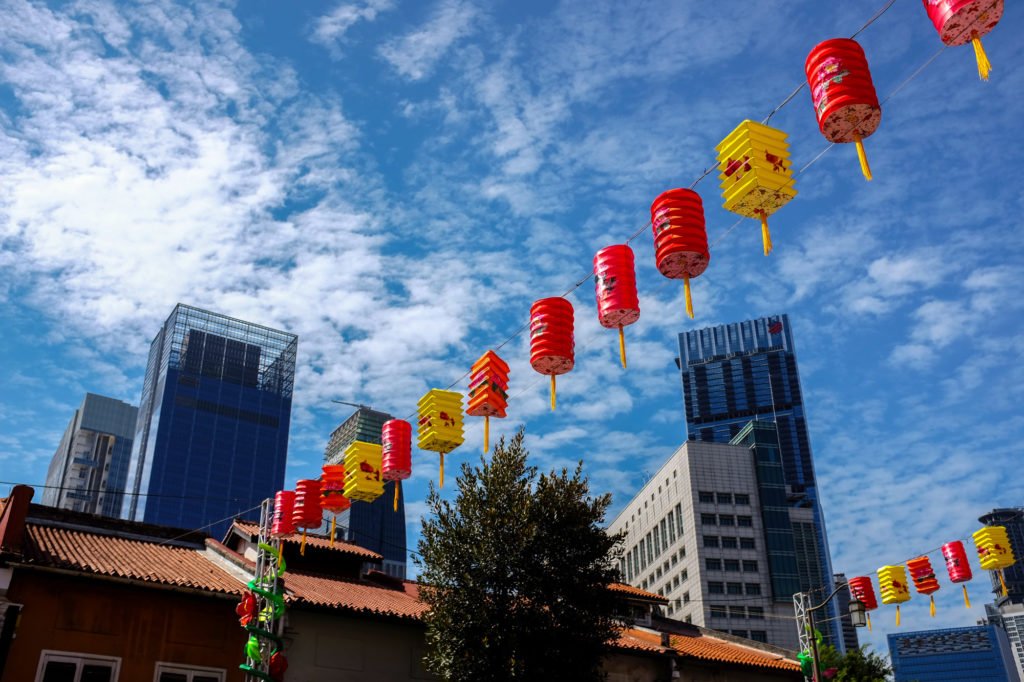 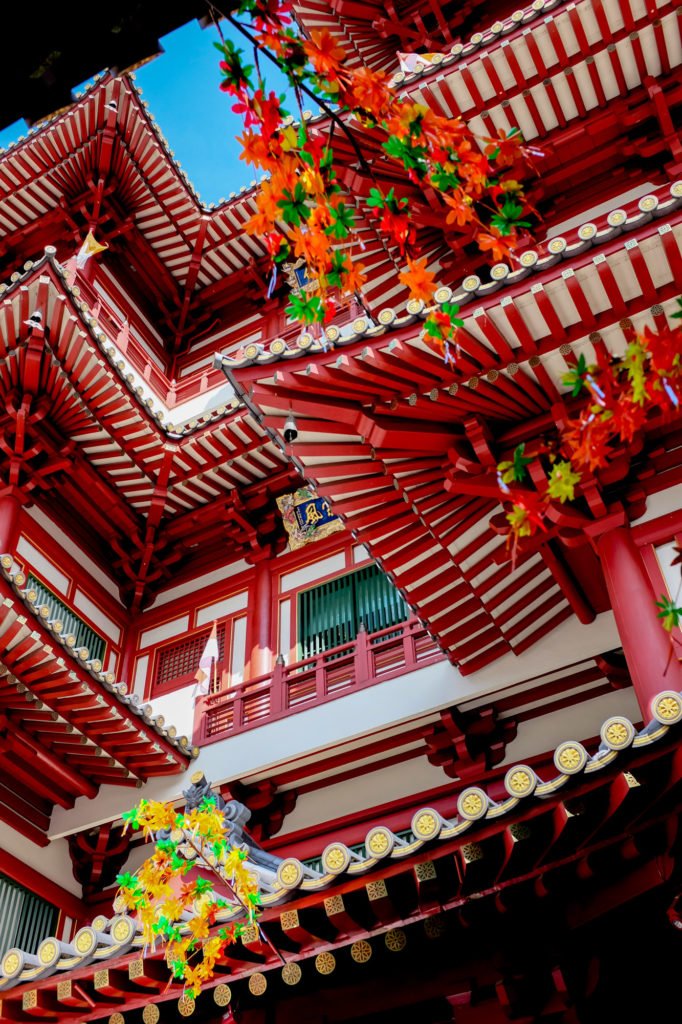 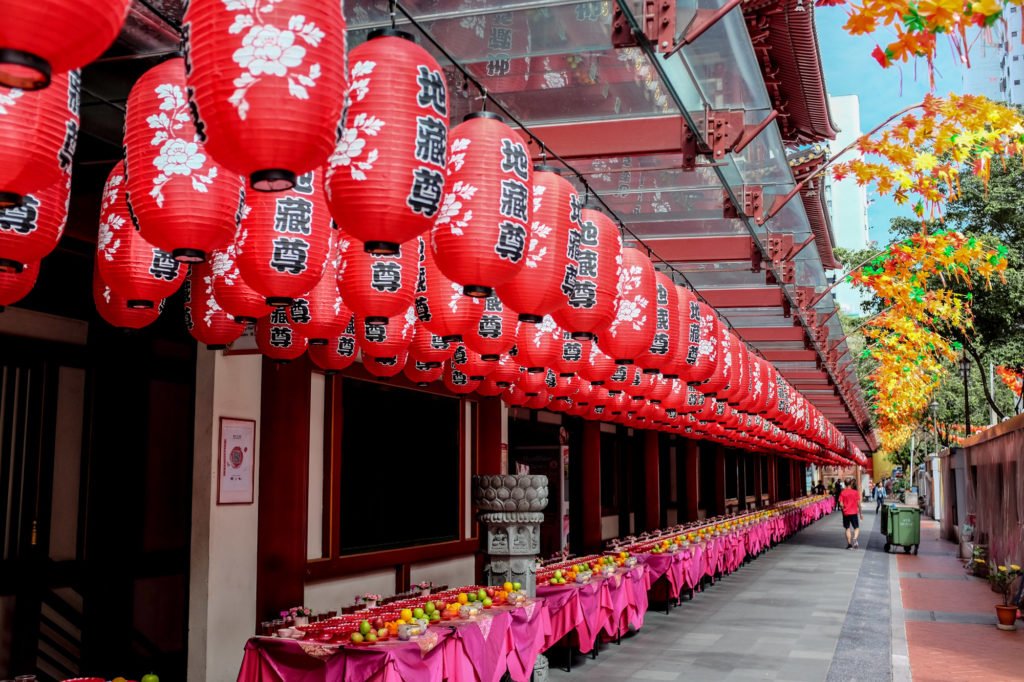 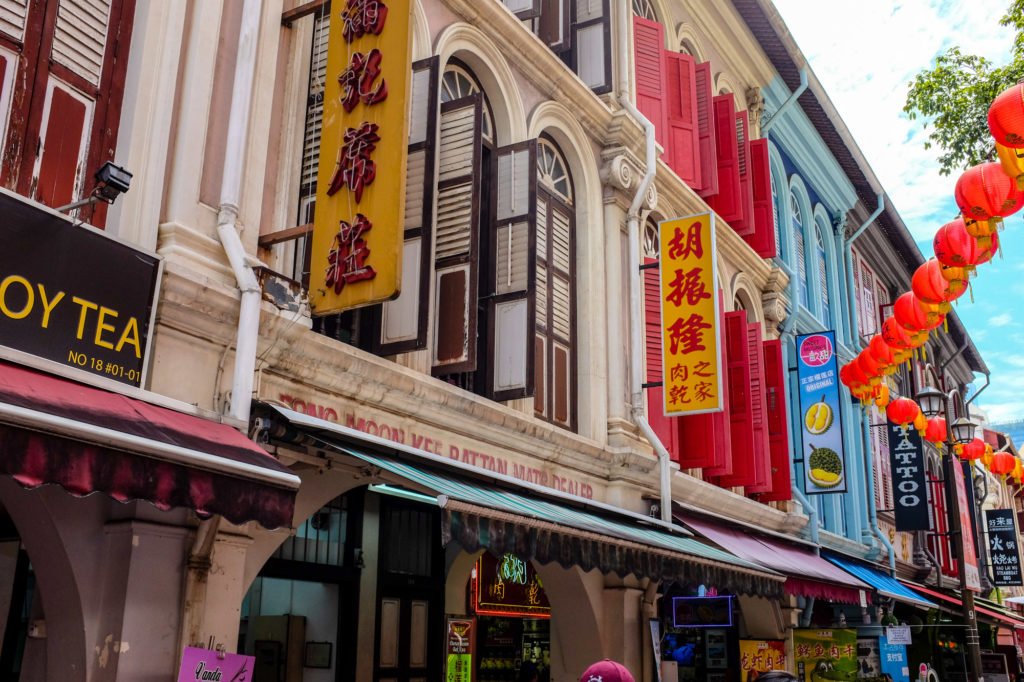 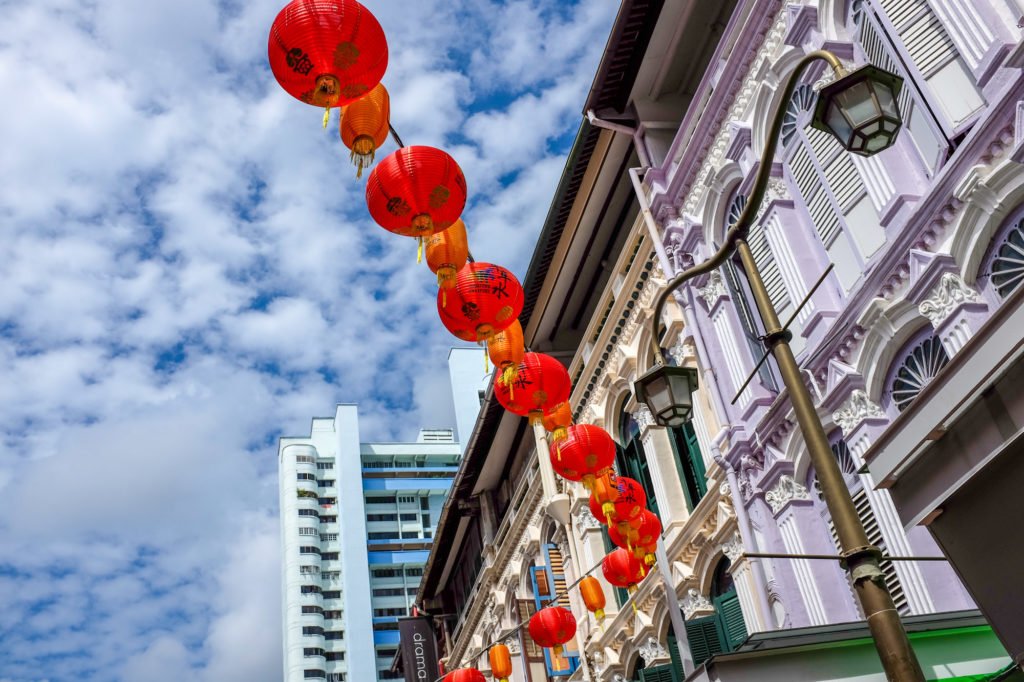 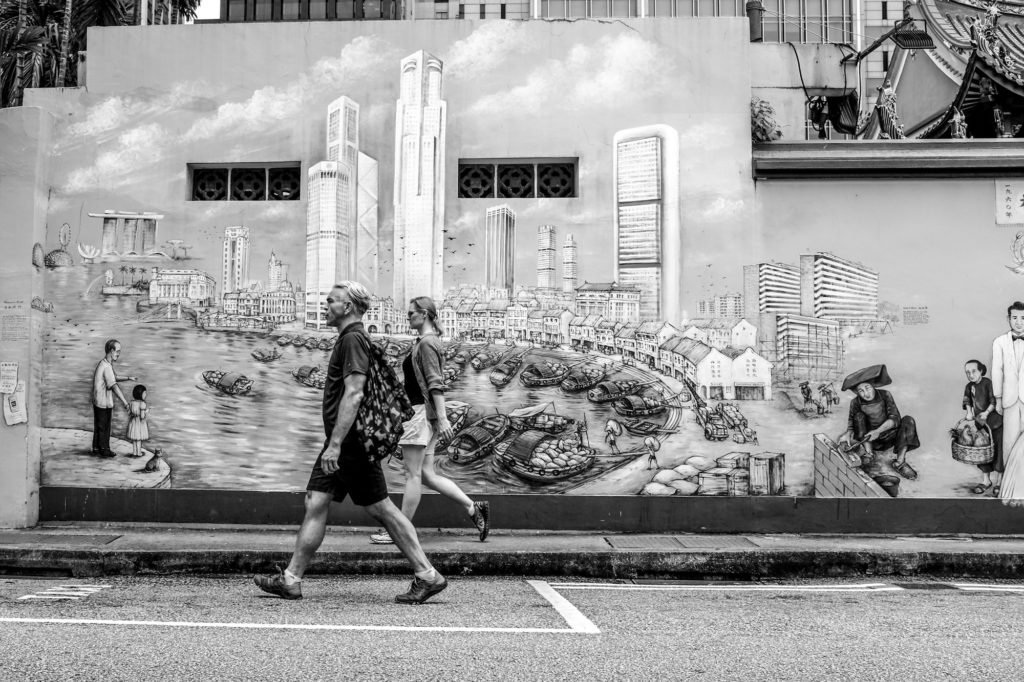 The original Kompong Bencoolen was a village (“kompong” in Malay) that doesn’t exist anymore, but the name is still used to refer to the area around Waterloo Street. This area is characterized by an incredible variety of places of worship, including at least a Chinese Buddhist temple, a Hindu shrine, a mosque, a synagogue, and multiple Christian churches. This is again testimony of Singapore’s cultural diversity and peaceful coexistence of different faiths.

As we approached Waterloo Street, the rain started falling heavily, forcing almost everyone to take shelter. While most people would put their camera away in such circumstances, I could hardly contain my excitement, as a rainy day creates so many more opportunities for capturing interesting scenes. I also wasn’t worried about getting my camera wet, since the Fujifilm X-T2 and the XF 16mm F1.4 lens I was using are both weather resistant.

I ran across the street several times, taking shelter under the umbrellas of the vendors of flowers and joss sticks that cater to the faithful. I spent about an hour there, happy as a clam. 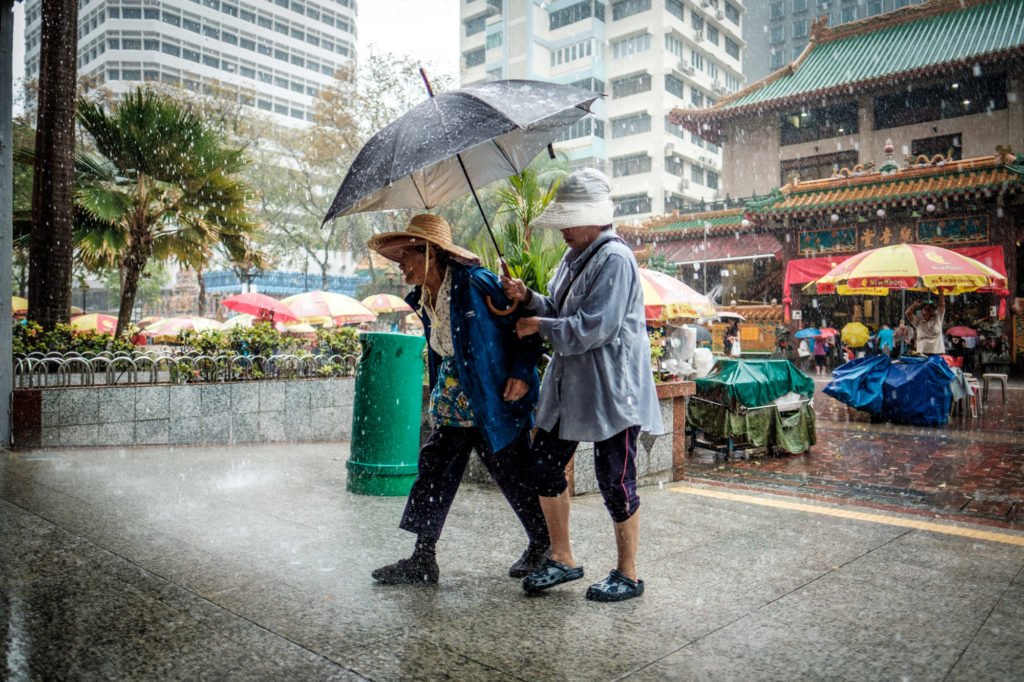 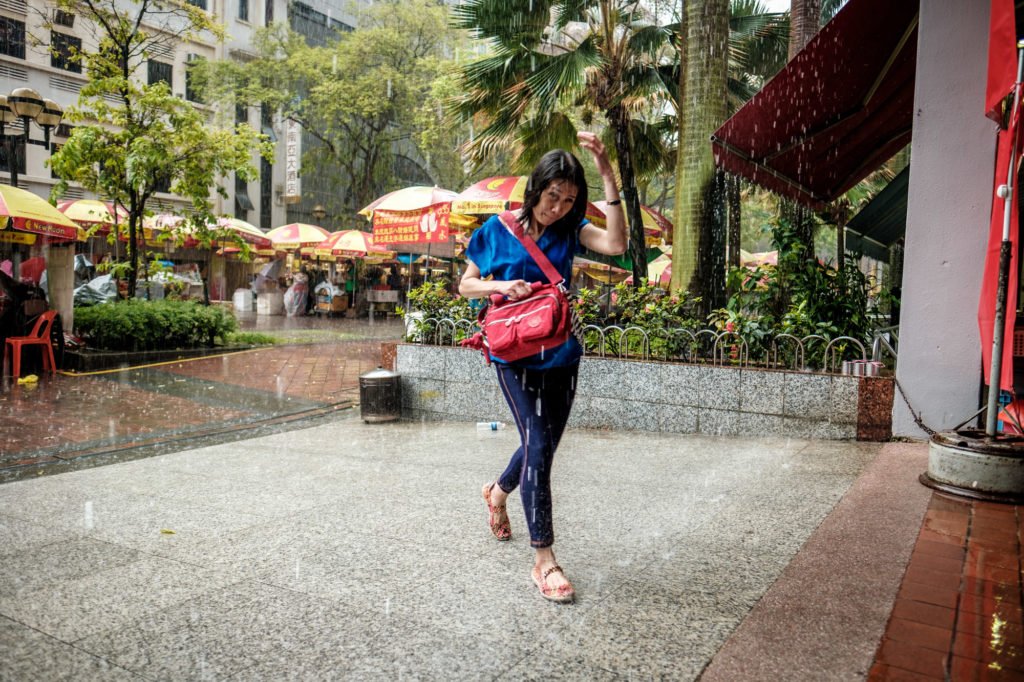 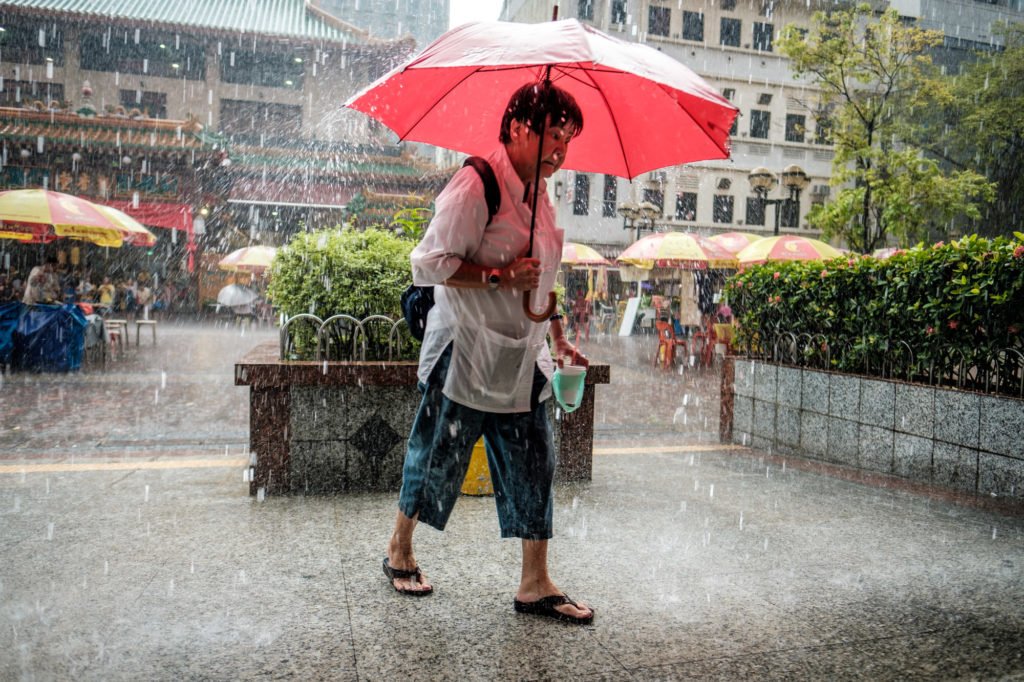 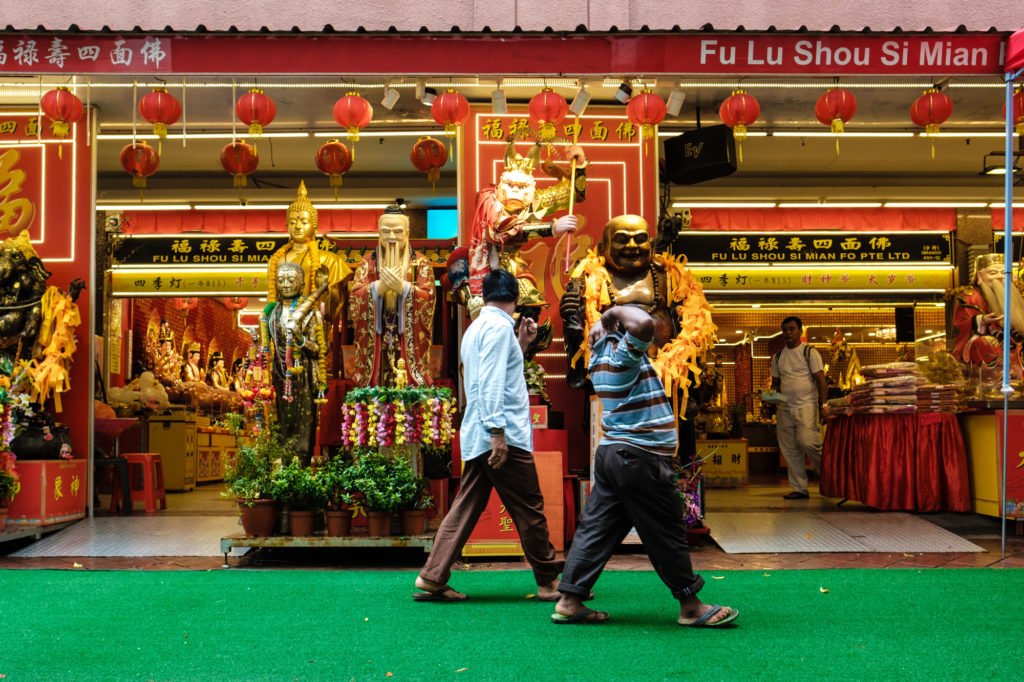 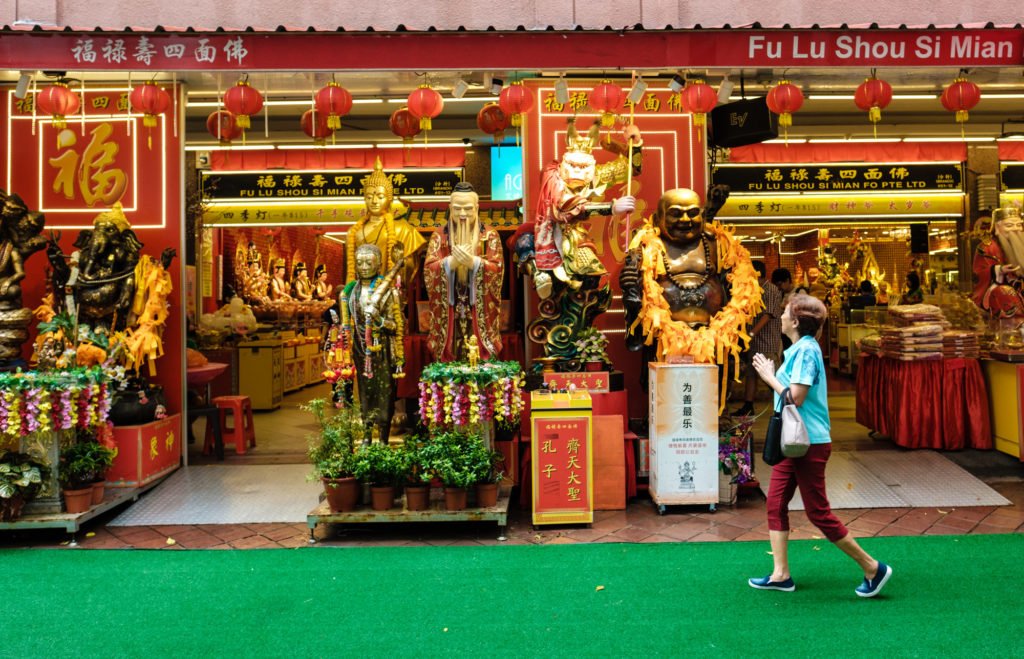 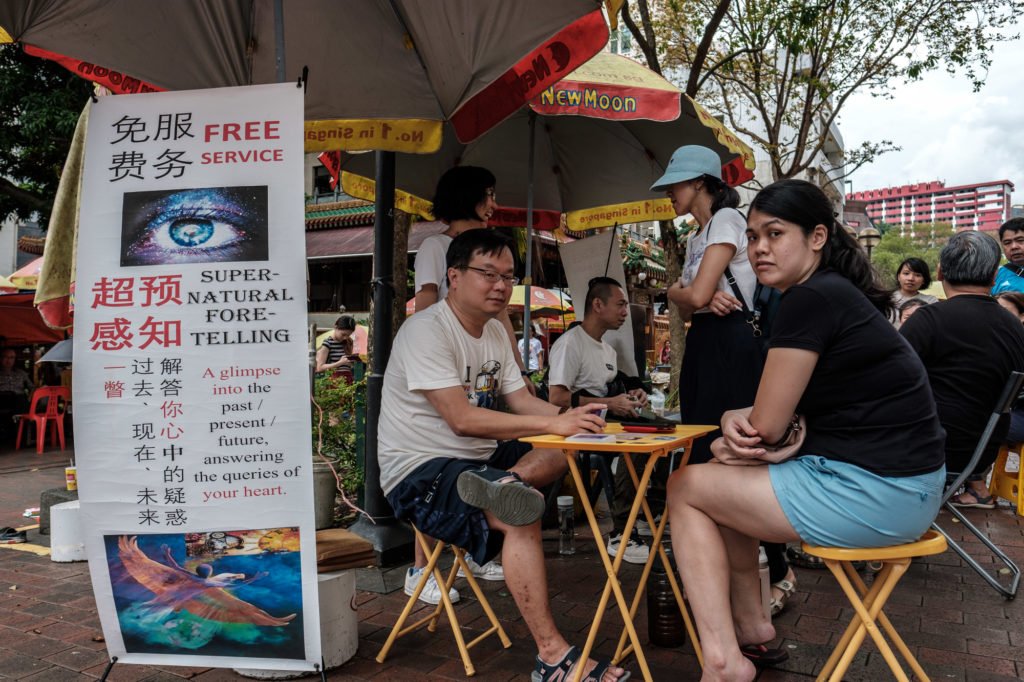 Did you foretell me taking your photo?

At times, we sought refuge under the roof of the famous Kwan Im Thong Hood Cho Buddhist temple–built in 1884 for devotees of Guanyin, the Chinese goddess of mercy–or inside the Sri Krishnan temple, a South Indian Hindu temple. We also wondered along the corridors of one of the public housing estates that line the street. 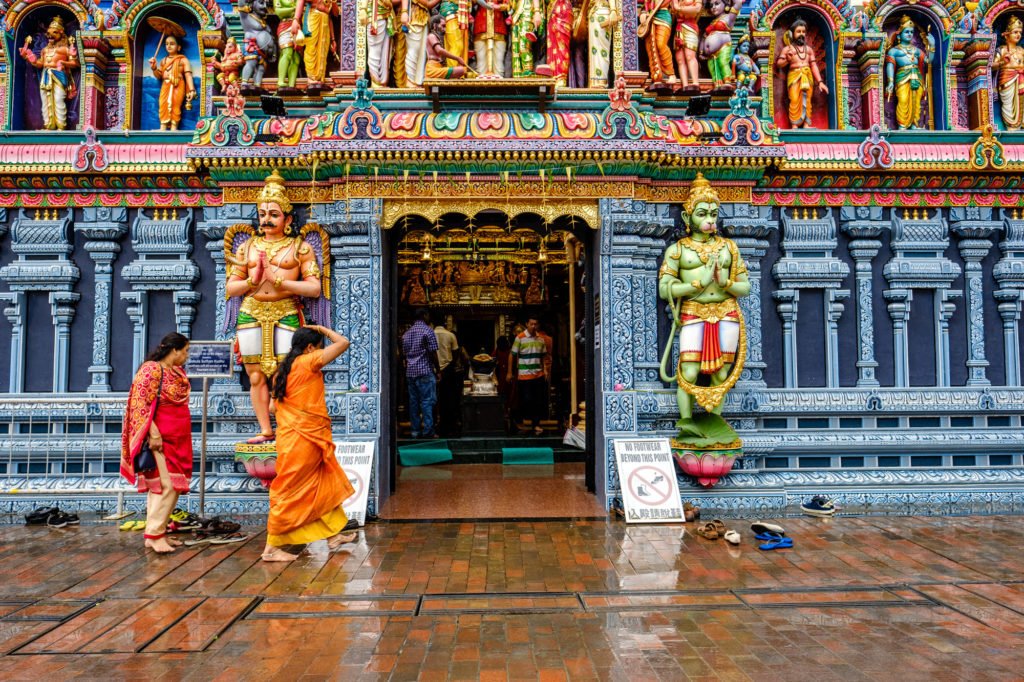 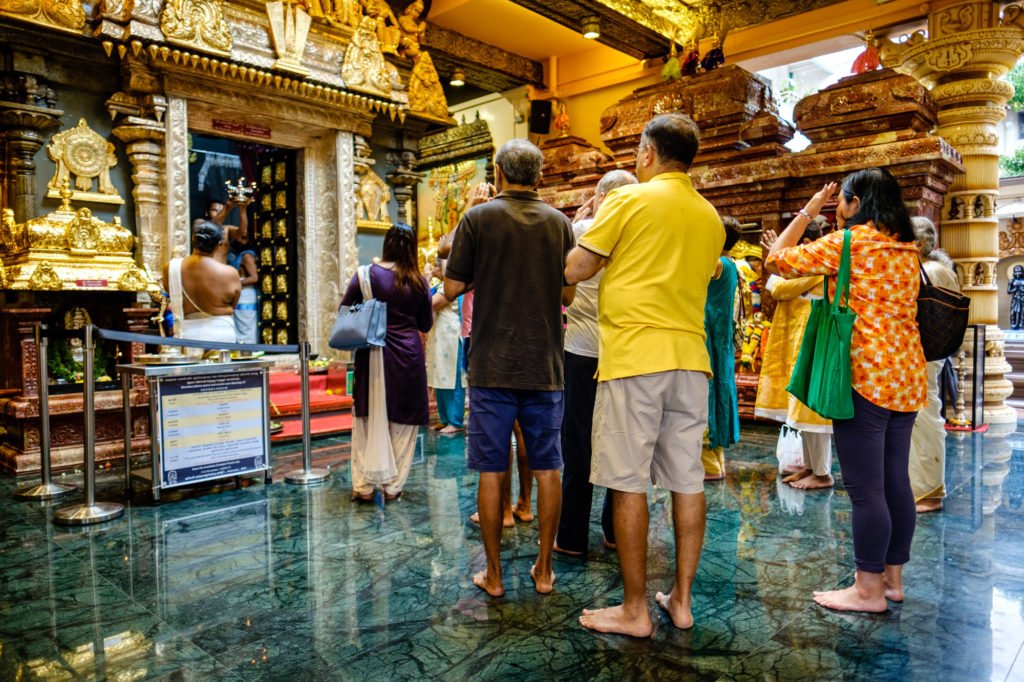 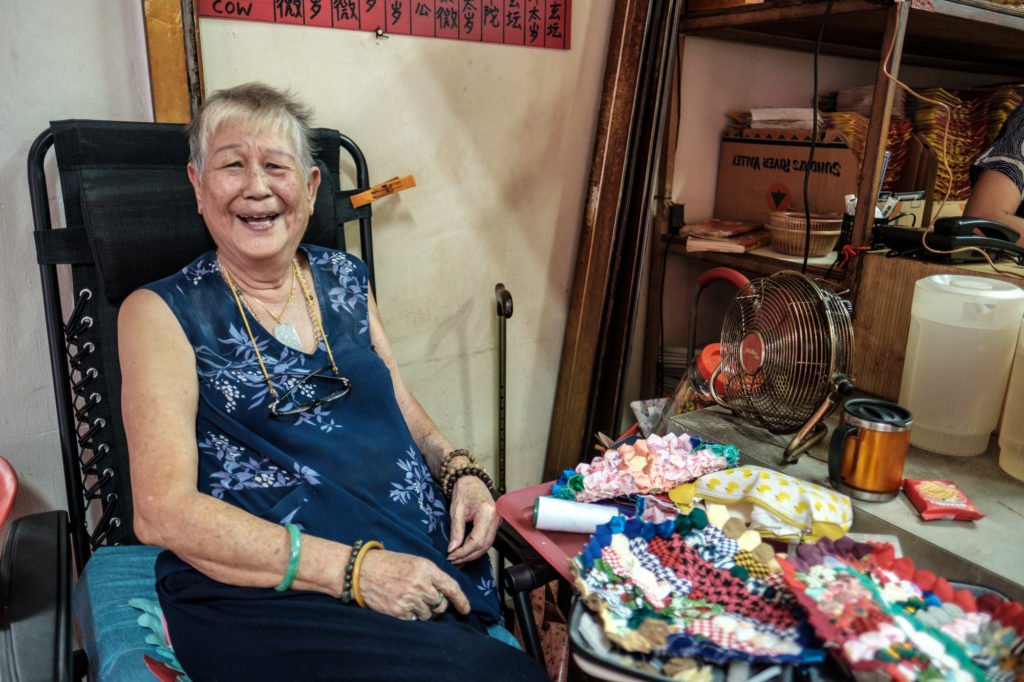 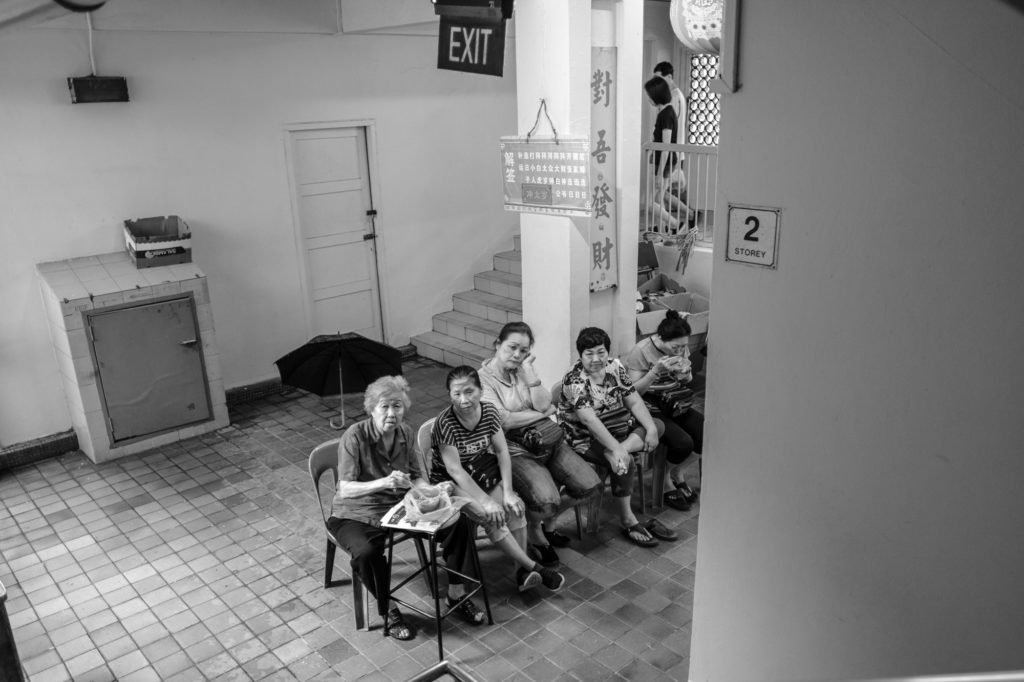 This colorful neighborhood, which houses a large Indian community, was a riot on a Sunday morning. The large covered market contained stalls selling all kinds of goods. The pastel-colored buildings and the street art on some walls provided a wonderful backdrop to the vibrant tones of the sarees of the women walking by. I wish I could have spent more time there. 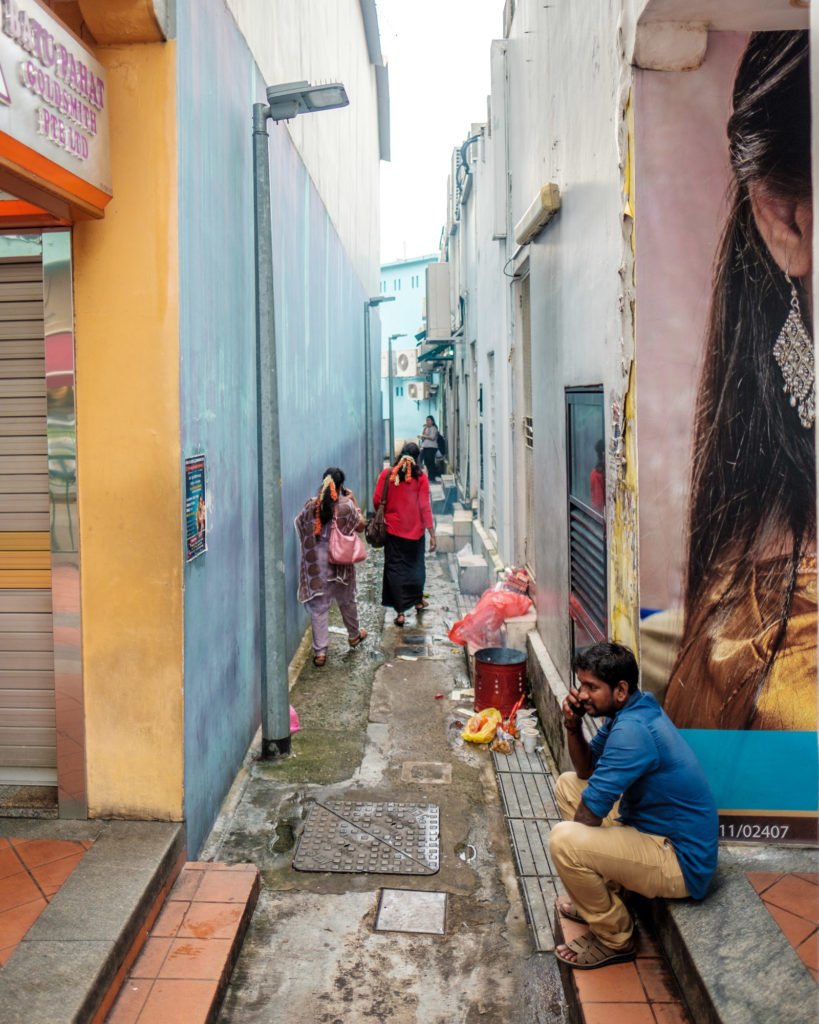 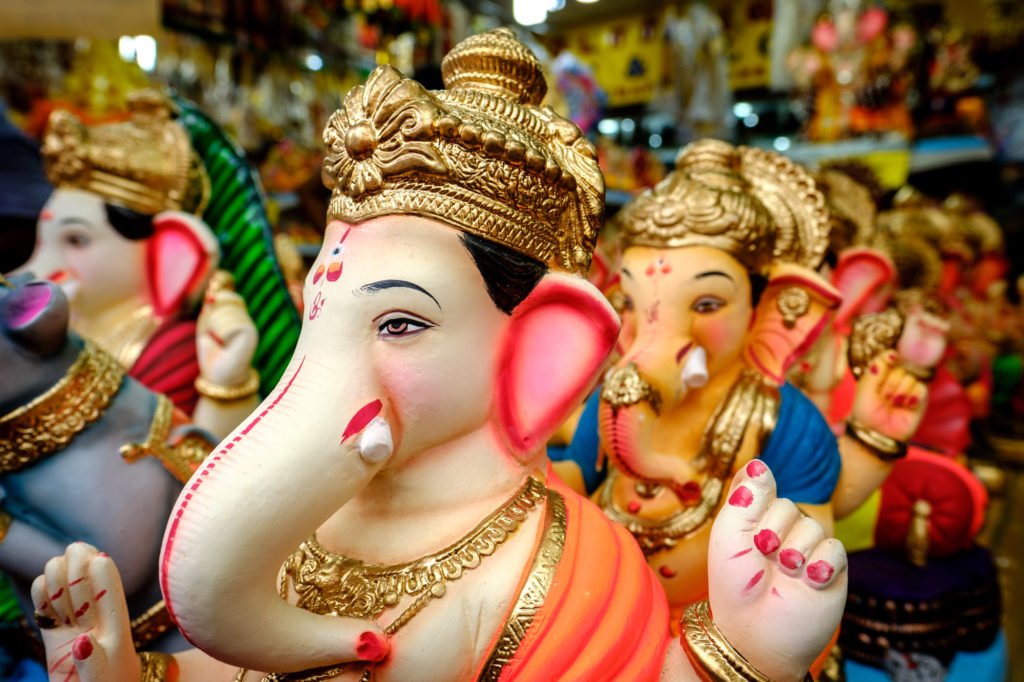 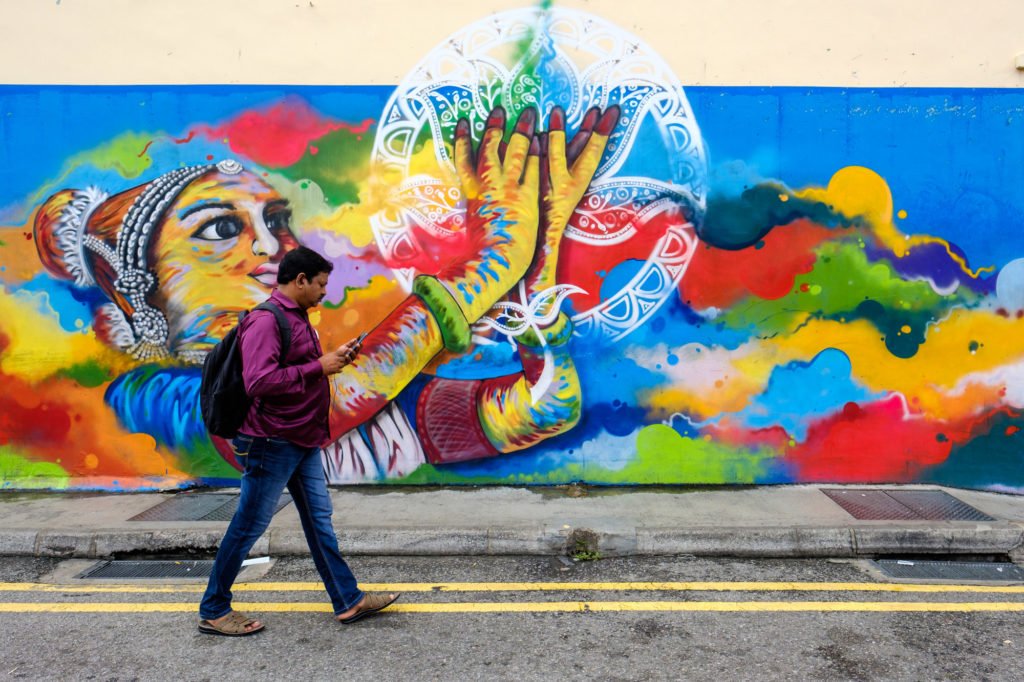 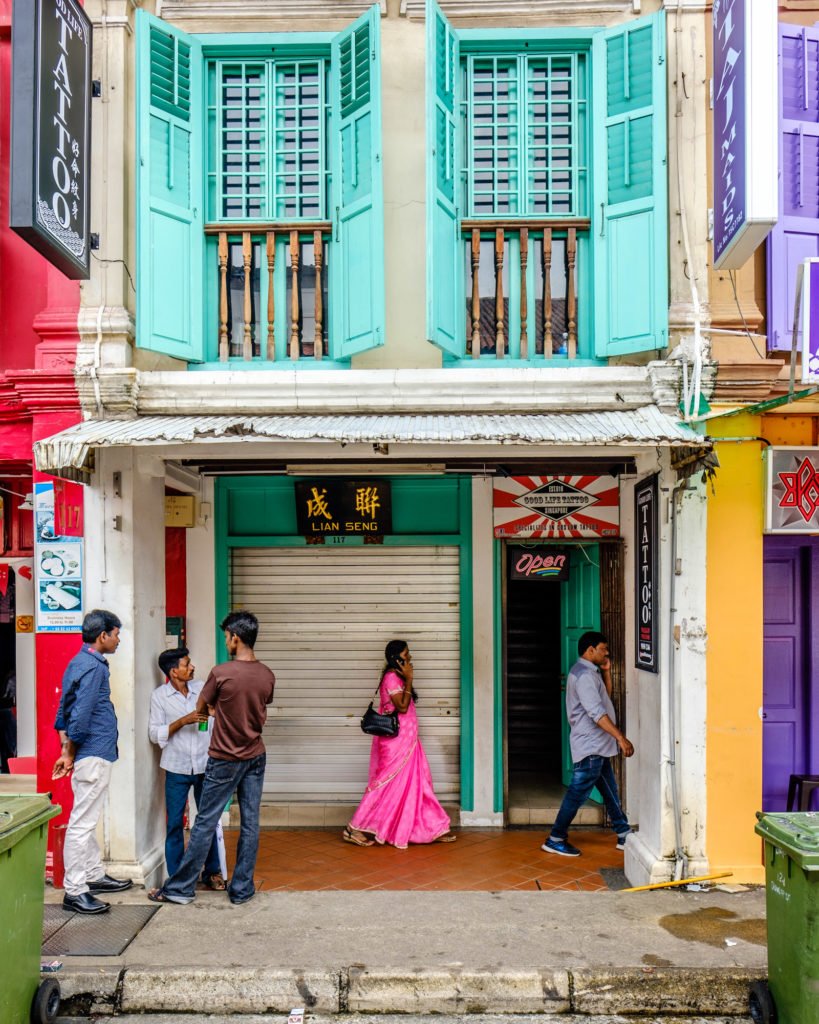 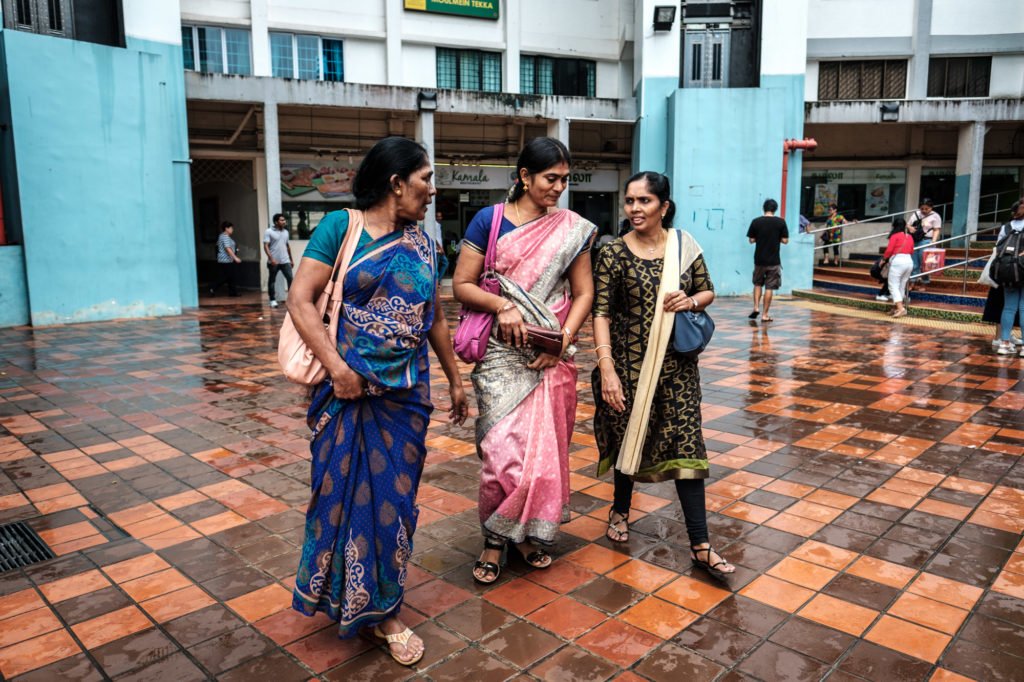 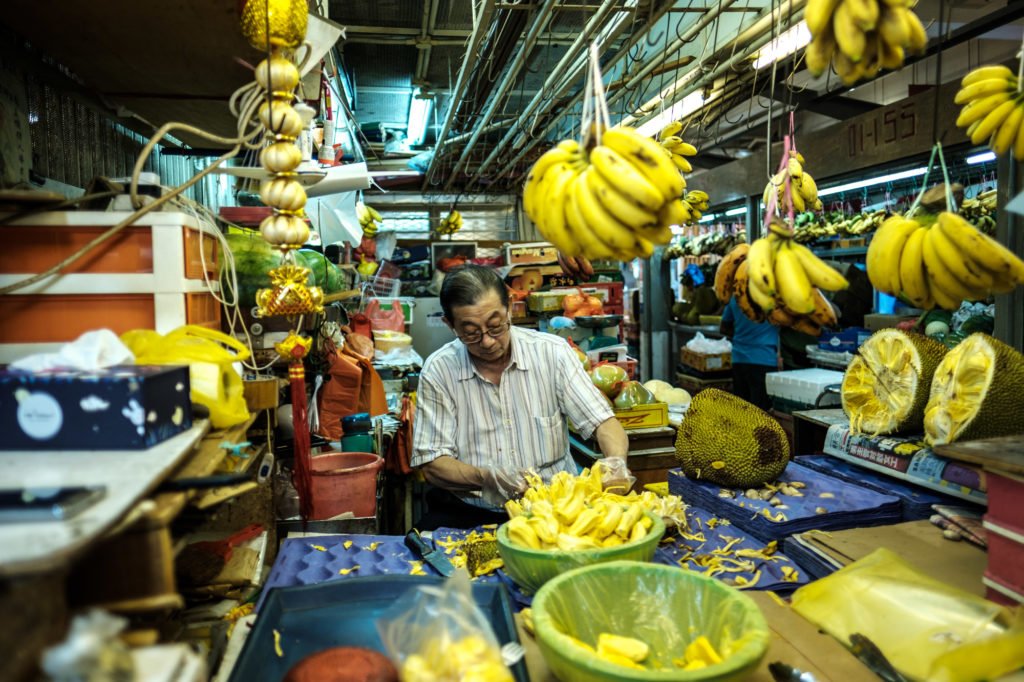 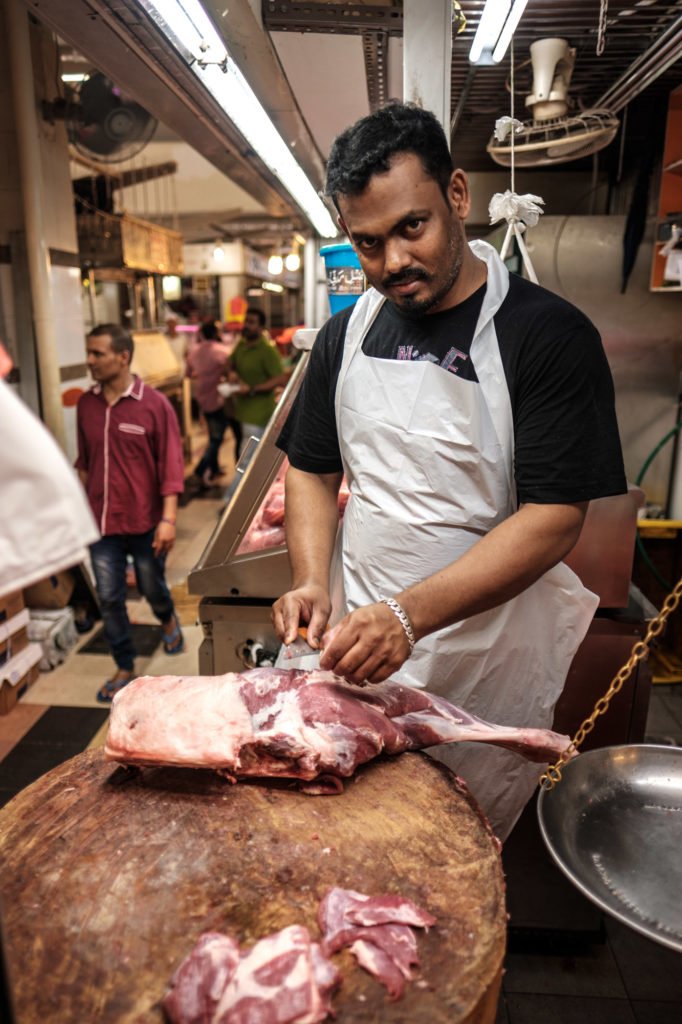 In a Little India market, Singapore 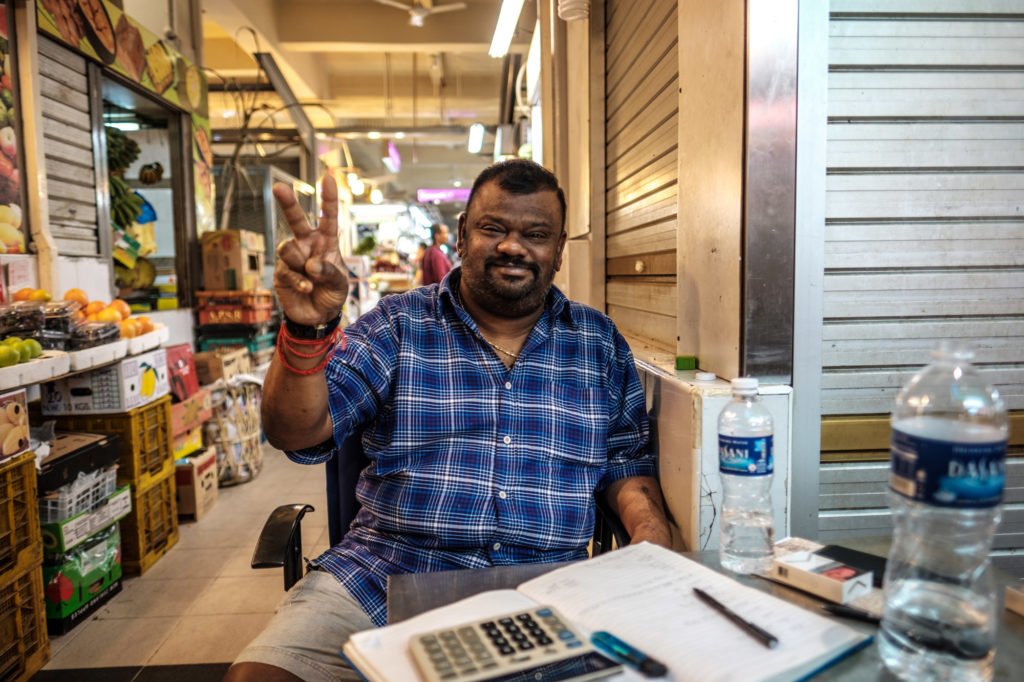 In a Little India market, Singapore

Finally, some of Singapore’s famed modern architecture from the area around Marina Bay and the Gardens by the Bay. We spent a couple evenings in the are and were graced by colorful sunsets and spectacular blue-hour scenes, including the light show at the Marina Bay Sands Hotel. What better way to end a day in Singapore? 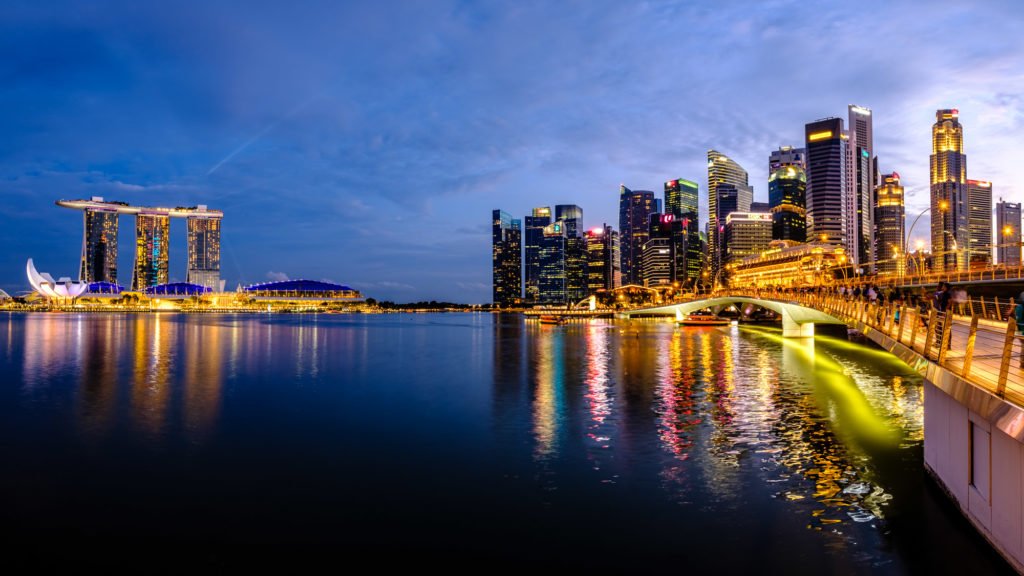 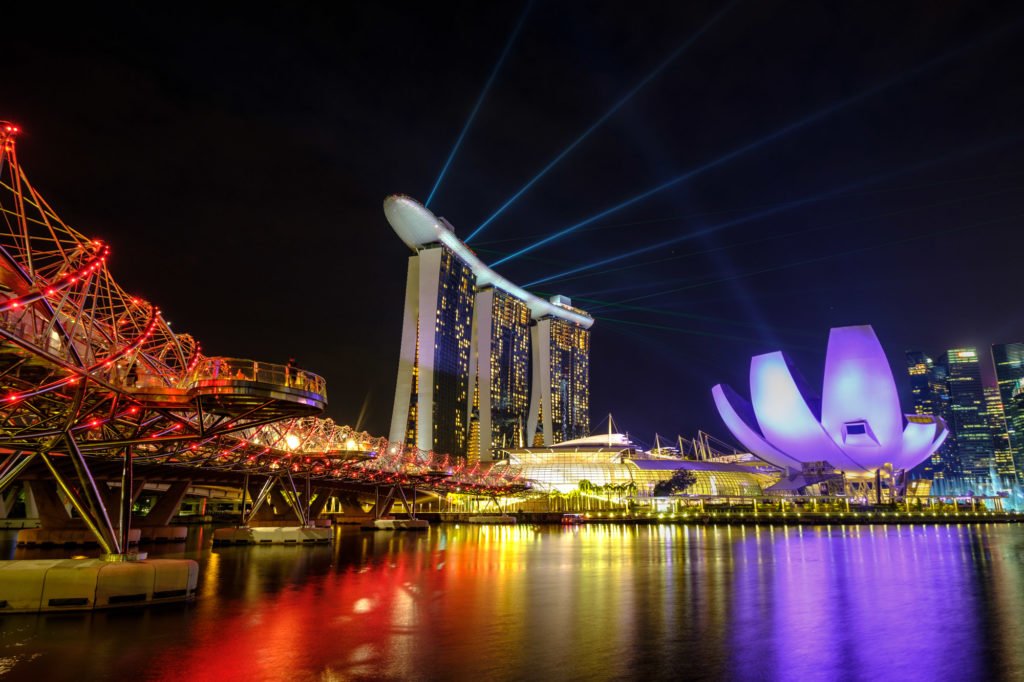 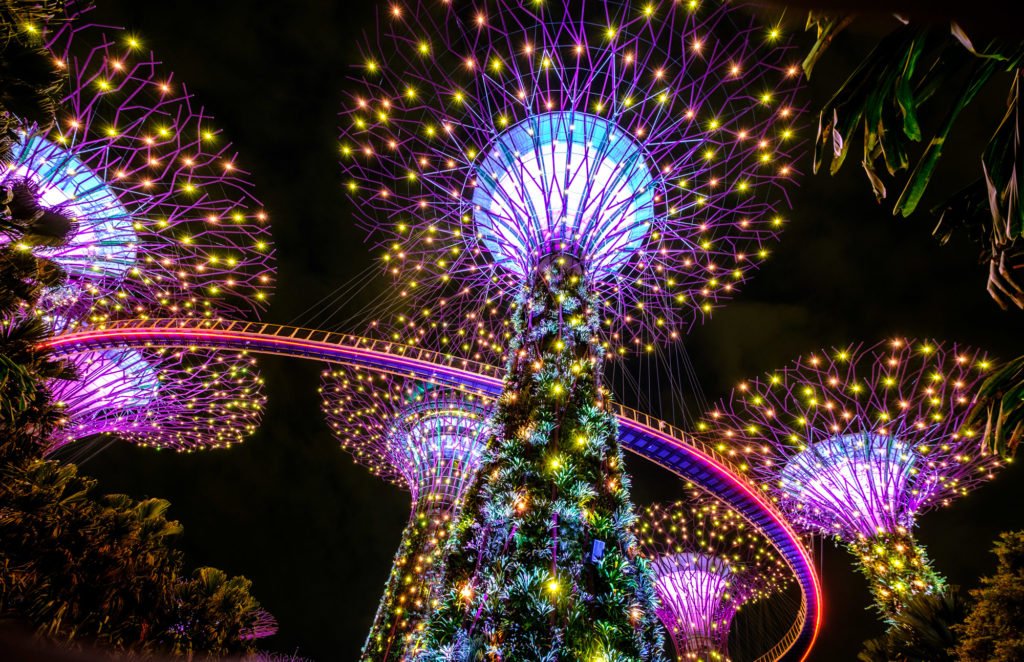 Supertrees, Gardens by the Bay, Singapore

All photos taken with the Fujifilm X-T2 and X100S cameras, with a variety of lenses. With thanks to Carolyn Lim for lending me her camera when mine was broken.