The final leg of our drive along the Amalfi Coastline took us to Sorrento, where we spent the night. The morning after we walked down to the port in the early morning to board a fast boat bound for the island of Capri. Having been there more than 30 years ago, I was surprised by how well I remembered it.

We spent the morning doing a long hike along the footpath that leads from the main square of the city of Capri down along the southern side of the island, towards the famous faraglioni (sea stacks). I knew the light conditions would not be ideal at that time of the day, but I was not worried, having already planned to be at the right spot before sunset. I still wanted to exploit the fact that the X-T2 gives me a 4-stop range when doing auto-exposure bracketing (-2EV, 0, +2EV) in these harsh backlighting conditions, so I did shoot some pictures. The results are not great, but I wouldn’t have got anything with the limited AEB range of my old X-E2. 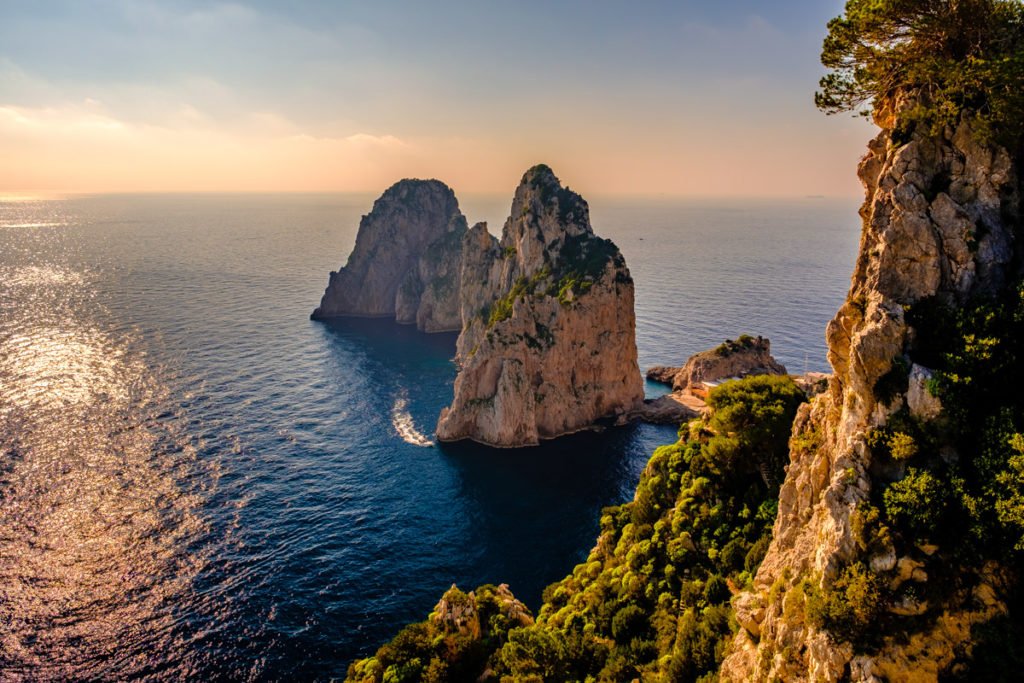 The direction of light was much more favorable when we reached Villa Malaparte, a masterpiece of Italian Modernist architecture. I find strong, direct sunlight to be actually quite appropriate for such a subject. 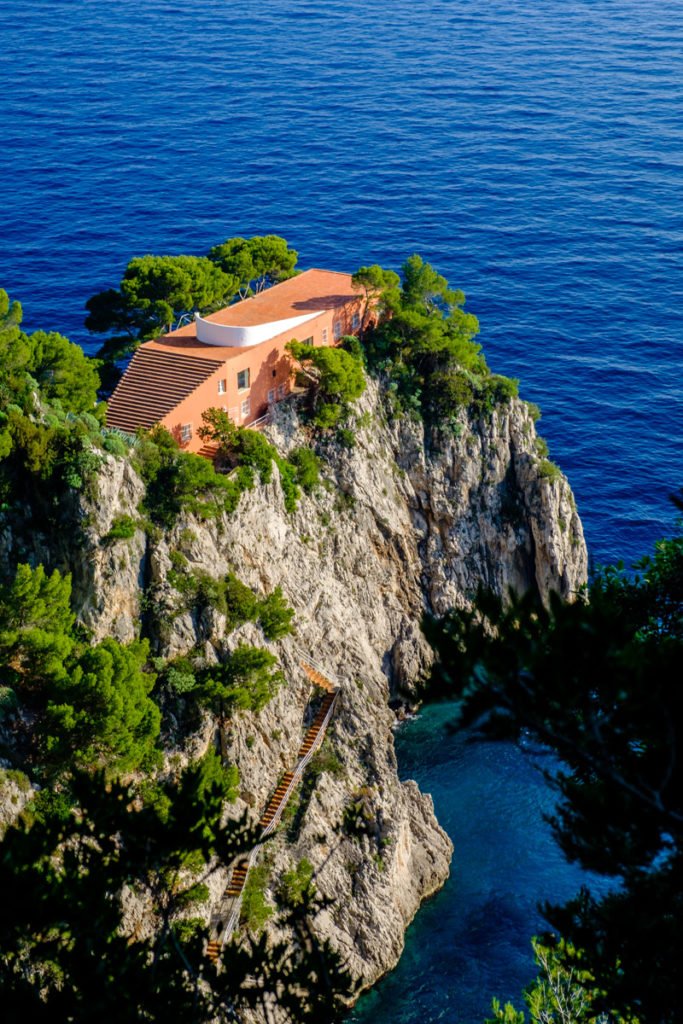 In the afternoon, we took the bus to Anacapri, the smaller of the two cities on the island, to go and visit Villa San Michele, once home to an eclectic Swedish doctor and intellectual, Axel Munthe. The Egyptian sphinx sitting on a balcony is one of the highlights of this fascinating mansion that has been preserved as it was a century ago and the suffused light of the winter afternoon lends a dreamlike aura to it. 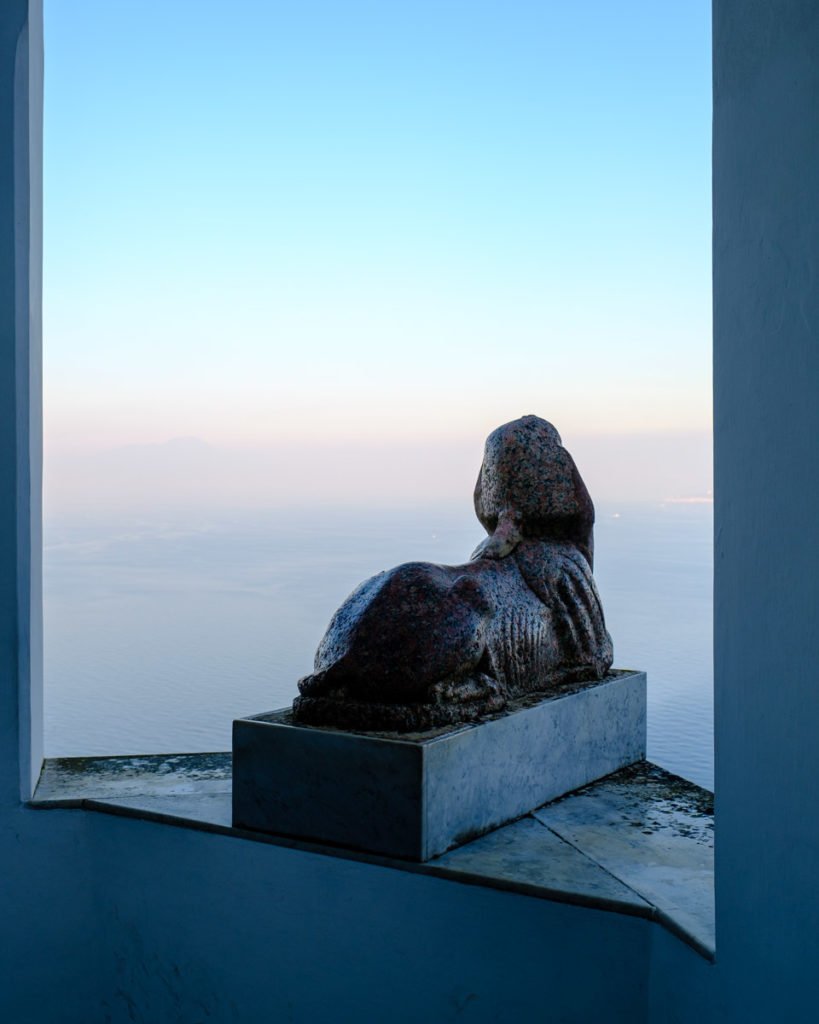 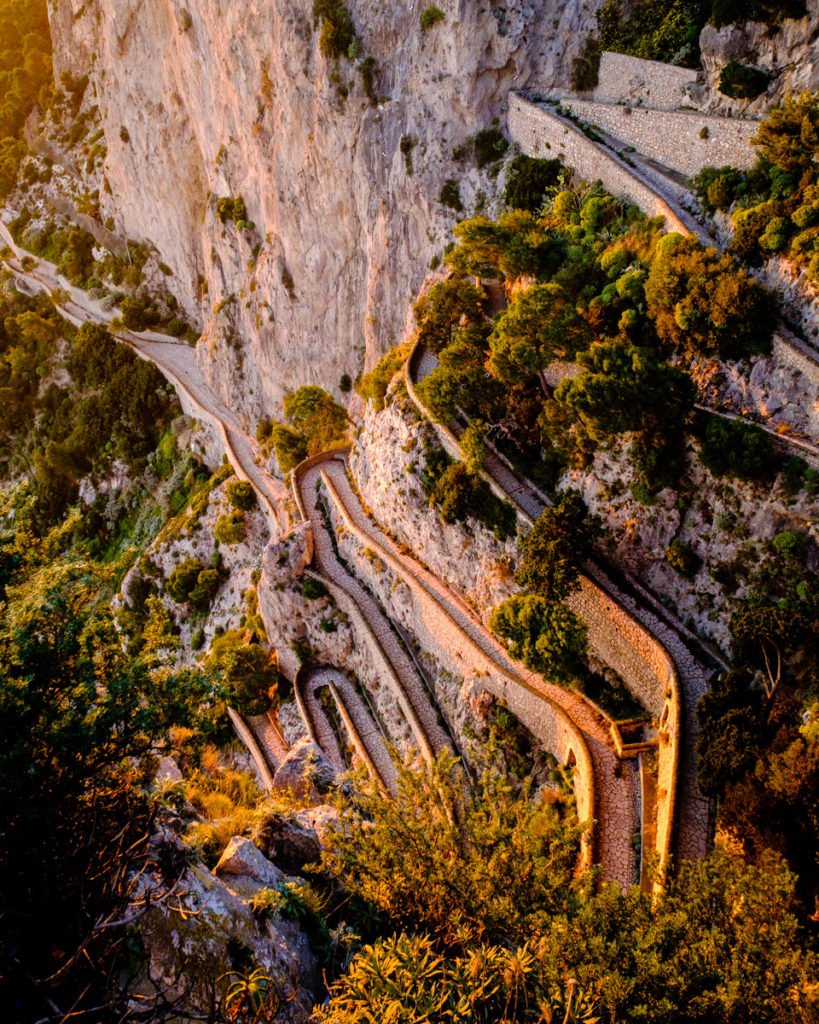 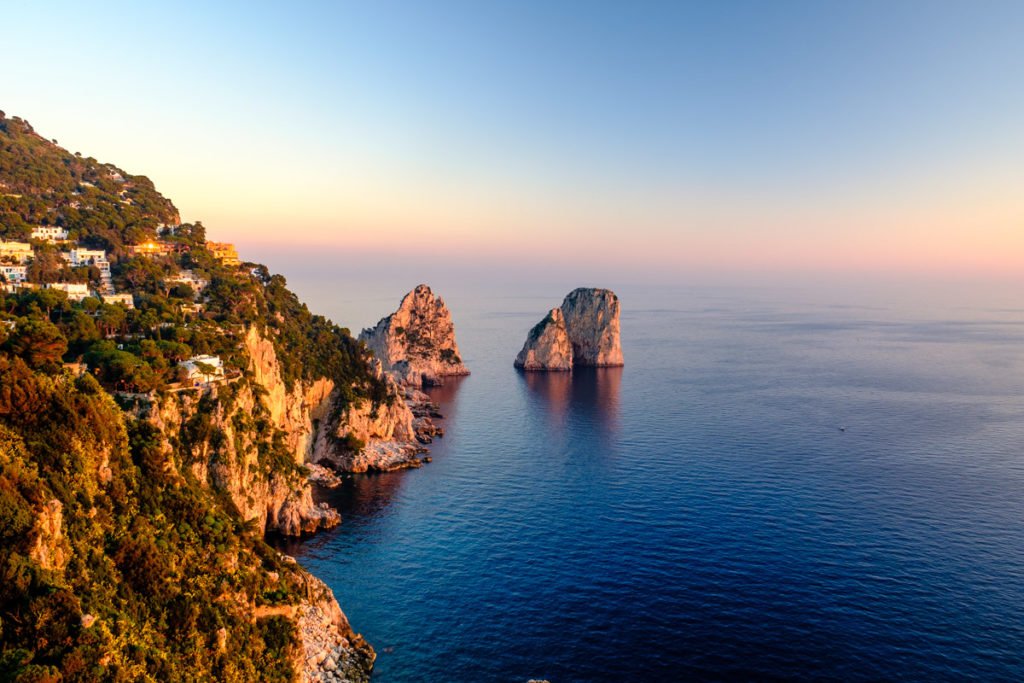 I finally got a few blue hour shots from the Piazzetta, while we were waiting for our boat back to the mainland. The one below was shot hand-held at 1/30s on the Fujinon XF 16-55mm, which is not stabilized, so I had to be extra careful with my technique and leaned against a nearby column to help steady my body. 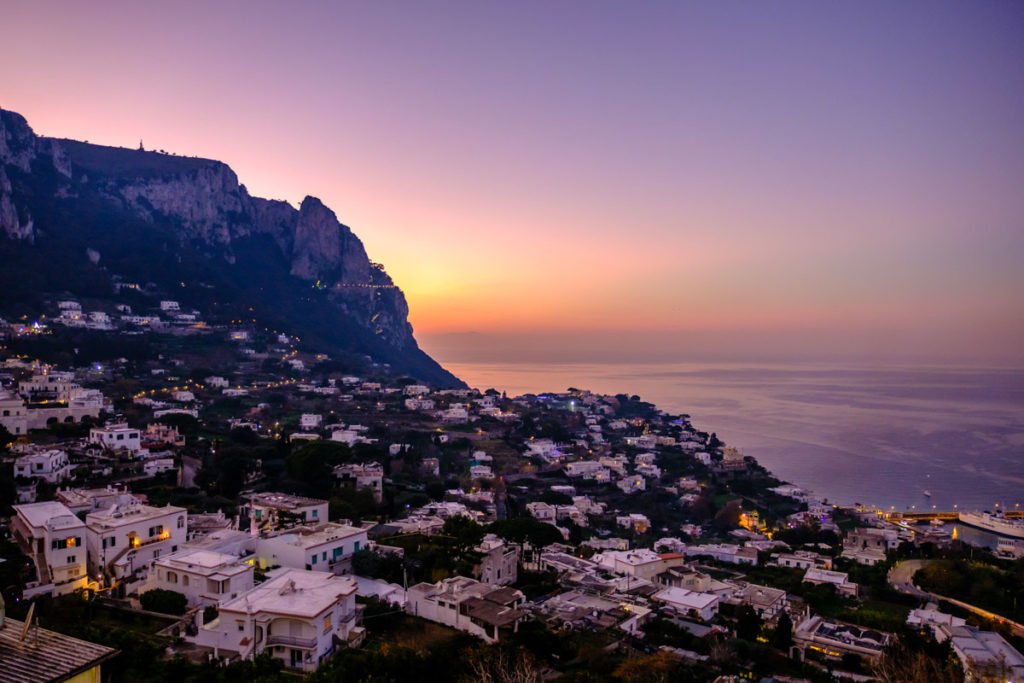 On the way back home, we did a stop at Caserta, to visit its Royal Palace, an immense mansion built for the Kings of Naples, who wanted to rival the grandiosity of Versailles. As we got there in the middle of a very hazy day, I limited myself to shooting the interiors. Luckily there weren’t too many tourists around. 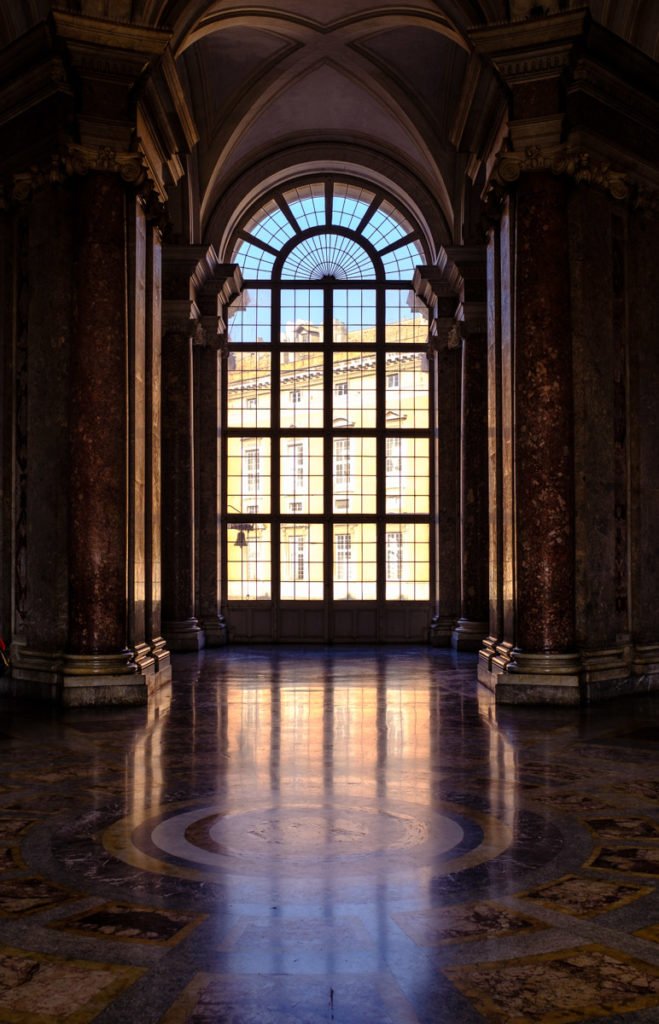 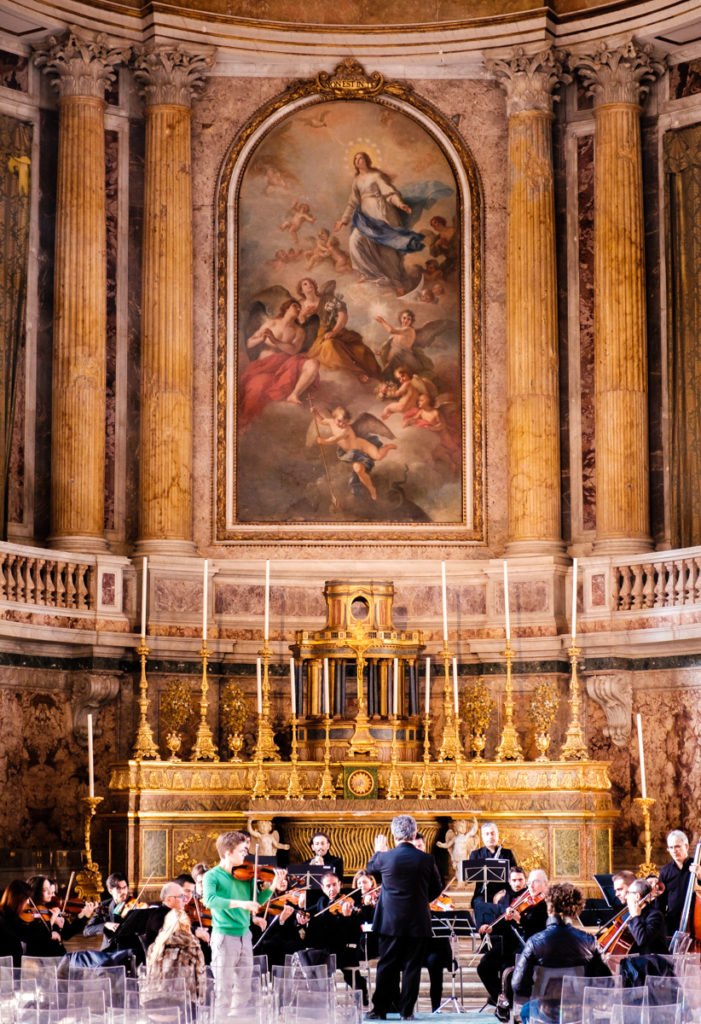 In the four days of our trip, I gave the X-T2 a good workout, having filled a 32GB card, in many different light conditions and it always performed admirably. Image quality was nothing less than what I had expected, but what actually surprised me the most was how fast and responsive it is and how well ergonomically designed it is, save for some minor details, like the fact that the top function button is hard to reach, being wedged between the exposure compensation and the shutter speed dials. The diopter adjustment of the electronic viewfinder is a bit too easy to operate, whereas all the other dials have strike a perfect balance between stiffness and ease of operation. I was also mildly annoyed by the fact that the cover of the PC-Sync connector disappeared almost immediately. The new tilt-and-swivel screen is amazingly useful.

I will need to use the X-T2 more and in more situations and conditions, but so far I can say that I like my new camera a lot.